“If I let go of the grass I'll fall into the sky!”

“I haven't seen anything that big and angry since the last time I looked up at the Sky!”

An artful rendition of a hyperviolent ray emitter designed for use to combat the sky.

The sky is a big blue wobbly thing hovering over everything that may, one day, fall and destroy the planet. The only way to avoid certain death is to live near the sun which blasts the sky with hyperviolent rays which look just like normal rays but have angry eyebrows in addition. Avoid the sky at all costs. 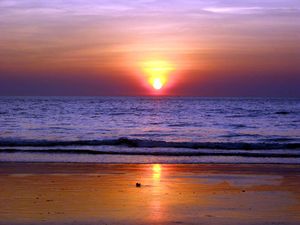 The sky changing colors. Likely attempting to disguise itself as a harmless orange

Originally discovered by birds, the sky has always been wreaking havoc, showing up when not wanted, and suddenly changing colors when the sun moves around. During the daytime, the sky blocks our view of space, which is even more dangerous, as it's bigger, and significantly darker than the sky. Space also contains small white dots which I am told are trillions of years old leaving me to believe they possess magical powers. Space magic is very dangerous, but not as dangerous as the sky which hides it from us 12 hours of the day.

Occasionally the sky gets all gray and wet, and then everything else gets wet. This is probably everything trying to disguise itself as the sky to avoid being killed, for all know that the sky would never harm itself. When the sky isn't wet it will sometimes get bored and spin in circles really fast. During this time houses will occasionally join the sky in spinning really fast. People however, will always run away, as fast sky tends to ruin their hairdos.

The sky is a source of food for most plants and animals and is usually eaten 24 hours a day, but can be enjoyed less if you are dead or a fish. The sky provides many nutrients when eaten, such as carbon monoxide, sulfuric gas, nitrogen, and airborne poison. The sky can be dangerous even when being eaten however, as eating too much sky at once may cause convulsions called "coughs." Coughs have been known to kill and are the leading form factor for most deadly viruses.

The sky may be kept as a pet in a small, medium, or large metal can, but can only be captured through the use of magical devices called "compressors." Attempting to capture the sky with anything other than a compressor will result in immediate failure. The only other viable means with which to capture the sky is the act of "blowing bubbles" and this will only slow down the sky in it's attempt to destroy you for the bubbles will soon burst and the sky will escape.

The sky is a valuable source of transportation for many birds, planes, and Superman. More leisurely versions of sky travel consist of hot air balloons. The workings of hot air balloons are still a mystery, but theories that "angry sky" is lighter than "normal sky" seems to be the most popular.

The sea is another species of sky which is fatter and wetter than normal sky, but equally large, blue, and wobbly. The sea tends to be a ground-dwelling sky, but this does not make it any less dangerous.

Smoke is a popular underground species of sky, featured in the hit video game franchise "Mortal Kombat." Smoke is also used less for food, and more for suffocating when one is surrounded by fire and would rather not be burned to death. 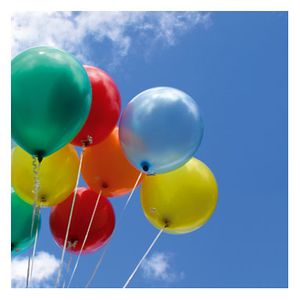 A veritable feast for any hungry sky

The sky is a carnivorous and occasionally cannibalistic species, as it's diet consists mostly of balloons which are feasted on until all the sky is drained from them, at which point the rubber shell is discarded. Other forms of the sky's diet are unknown at this time and are still under intense study.