From Uncyclopedia, the content-free encyclopedia
(Redirected from Gatorade)
Jump to navigation Jump to search 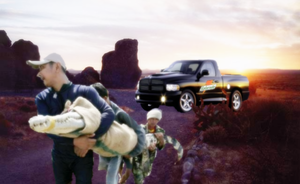 Gator Aide volunteers speed to the rescue of a couple trapped in a rocky crevice by bringing a live alligator to lower into the crack, who will hopefully help them climb out, instead of devouring them.

Gator Aide is a mildly successful organization devoted to providing aide to disaster victims and the poor, in the form of live alligators. Started in 1965 by Nobel Prize-winning alligator lover (in both meanings of the word), Steve Irwin, Gator Aide has assisted in nearly every major disaster, with mixed results. Since Irwin's feigned death in 2006, the organization has faced a major loss of support. Steve Irwin is currently residing in an unknown underwater grotto somewhere in the world, raising a team of crocodiles and alligators, hoping to one day emerge after a particularly devastating disaster, and use these large reptiles to help "save" the remaining population. This plan would likely backfire and leave the rest of suriving mankind to be eaten by large, scaly carnivores...

Gator Aide played a large part in rescue efforts shortly after Hurricane Katrina. Because the hurricane hit mainly Southern states, the helpful alligators in New Orleans and the surrounding area were more than happy to emerge from their swamps and bogs, and assist in the rescue of humans drowning in the water, or trapped on roofs. Sadly, because alligators do not have opposable thumbs or large arms, their rescue efforts had to be made by grabbing hurricane victims using their large, toothy jaws, which more often than not led to victims dying sooner than they would have if left alone. Despite this, New Orleans Gator Aide Rescue Unit spokesman Tom Shavoski points out that

When asked by a mother who had lost her five children to the alligator's rescue effort what the success was in an aide group that did nothing but decrease victims' chances of survival, Tom replied that he believes that she should ask herself that same question before criticizing others. The afforementioned mother replied by beating every alligator in the unit to death using a metal pipe. PETA members soon retalliated by decapitating her and feeding her body to their dogs. After this confusing argument and battle, residents in the New Orleans area refrained from further criticizing the efforts of Gator Aide. 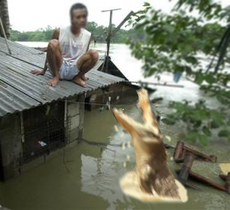 This Malasian man looks forward with admiration, atop his roof, as his reptilian savior springs from the water to try to grab him in his jaws and take him to safety.

As any American who watches the news knows, disasters in non-American countries (read: everywhere but America) receive little to no coverage, while the missed period of any pop diva will result in about 2 weeks of non-stop, up-to-the-minute news attention. On the off chance that a third-world country disaster IS reported, such as the tsunami in 2004, it is only because Americans died in it or had flights delayed, leading to minor annoyances. Luckily for non-America, Gator Aide forces are stationed in nearly every country in the world, thanks to the obsession of Steve Irwin. Whenever a flood, drought, volcanic eruption, genocide, homicide, suicide, typhoon, monsoon, meteor impact, mudslide, earthquake, "wardrobe maltfunction" or any other disaster occurs in one of these countries, the holding pens of the Gator Aide alligators are opened, letting them run rampant and free, in the name of justice. Thankfully for Gator Aide's lawyers, their typical "rescued" victims are either killed, injured, or cannot speak English, so unsuccessful rescue efforts do not result in the organization being sued... The alligators receive good quantities of "colored" meat to feast on, and pictures of smiling orphans (whom Gator Aide never laid eyes on, merely downloaded pictures of on StockPhoto) populate the company's brochures, leading to lots of donations... All in all, though not much help is given to those in third world countries, they are able to die for the benefit of America and Steve Irwin Land. 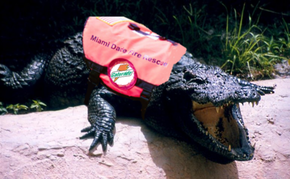 A member of the Gator Aide Miami Fire Rescue Team, this alligator is slowly waddling to the scene of a fire. If he manages to get there before the building burns down completely, or the fire is extinguished by human fire fighters, it is unclear what exactly he can do to help, but doesn't he look so cute in that orange jacket?

Gator Aide is not limited to just major disasters. Or even places near bodies of water. No, as shown in the first image of this article, Gator Aide has forces stationed even in completely dry areas, so nearly everyone worldwide is "protected" by alligator forces. The Gator Aide alligators will rescue people in fires, car accidents, train wrecks (of both the literal and cinematic variety), cave-ins, and nearly every other minor disaster imaginable. Again, though their actual use to these rescues is minimal, aside from their want to "help" people by tearing off their limbs using their bare teeth, they make for mighty fine advertising cartoons. In fact, the Detroit Fire Department has one "rescue reptile" mascot named "Gator-y The Alligator" that teaches children about fire safety by quietly waddling into elementary schools and slowly digesting most of the kindergarten students while their teacher watches adoringly, safely hoisted to the ceiling by a system of pullies... Says Miss Amanda Bucklebeard,

Due to the general, almost oblivious, approval of this organization and their creatures by the American public, Gator Aide has been able to cover most of the deaths resulting from the intervention of their forces by labeling the people as "goners". In 2005, Steve Irwin and his alligators were awarded with the Medal of Honor (somehow) by President George W. Bush, who chuckled in his light-hearted Southern way as one of the creatures gnawed off his leg, resulting in blood spurting over the stage... After this inspirational moment, Irwin decided to gather his top alligators, along with his infamous crocodiles, and take them with him into his underground lair, after faking his death, where they currently reside, training for an apocalyptic disaster in which they will surely finish off survivors from the original calamity, in true Gator Aide spirit.

The Future of Gator Aide[edit]

Aside from the secret plans of Steve Irwin for assistance at the end of the earth, Gator Aide has taken on a new direction: Homeland Security. Yes, after the tragedy of September 11, Gator Aide directors decided that there was no better way to expand Gator Aide's services than controlling flights coming to and from America, as well as American airports. Gator Aide could drastically improve safety of American fliers by installing their forces on airplanes. But planners noticed a catch... Both alligators and crocodiles are too heavy and not agile enough to successfully monitor airplanes. So, the organization decided to expand their employees to a new reptile: snakes. Snake security on planes seems like a capitol idea for most people, with the exception of Samuel L. Jackson, who continues to profusely swear "I don't want no motherfucking snakes on this motherfucking plane!" whenever the prospect is suggested... What lies in store for "snakes on a plane" is yet to be known, but more likely than not, it will be the subject of a Hollywood movie at some point...

Gator Aide is not to be confused with Gator AIDs, which is a disease contracted by crocodiles, often after an un-greased back door hammer-time love making session with one or more black people and monkeys, as a service paid for with either mud or decomposing African furniture zebras. This problem first came about in 1824 when Uzambaque, a young man from the Umbunguwamba tribe of Southern Africa, came across a helpless crocodile basking in the mud, Uzambaque snuck up like a mysterious Frenchman and took the crocodile from behind without warning or lubrication leaving him in a crumpled mess, thereby starting the terrifying phenomenon know as Gator AIDs.

Scientists at Coca-Cola have been working on a sports drink to hydrate crocodiles, known as "Croc Help". Gator Aide has yet to comment on this copyright infringement.