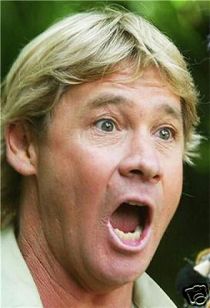 Steve Irwin's reaction when he spots the 2,427th crocodile he ever saw in his life.

Stephen Robert "Steve" Irwin (22 February 1962 – 4 September 2006) was an Australian adventurer, wildlife enthusiast, and well-known television personality. Nicknamed "The Crocodile Hunter", he is greatly responsible for making an entire generation love every animal species that exist on this planet, from the most beautiful of pandas to the ugliest of platypuses and cockroaches. 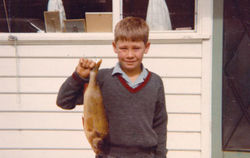 The moment where it all began.

For those without comedic tastes, the so-called experts at Wikipedia think they have an article about Steve Irwin.

Sadly, Irwin was abandoned in the wilderness by his parents when he was 2 years old since they could not cope with their offspring's tendency to continually jump around the house and scream instead of talking normally. The young lad was then raised by Australia's wildlife. One day he could chill out with a bunch of koalas while on the next day he would travel huge distances hopping around in a kangaroo's pouch. He was tremendously appreciated by the animals; there was always a warm crocodile's mouth available for him to sleep in on cold nights or a friendly boa to bring him some nutritious meal.

By the time he was eight, our little scallywag personally knew about every animal in Australia, from that incredibly fast kangaroo who could run a mile in under a minute, Speed Guru, to this grumpy platypus and his tendency to incessantly talk about his incestuous uncle, Playwit Typus.

Having attained his maximum size, Irwin decided to move out of the swamp and spread his wildlife love to the masses of people for whom the pinnacle of wilderness consists in a squirrel sighting at the industrial park. 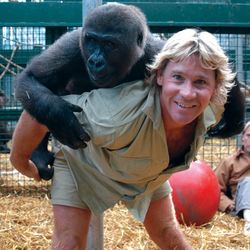 Trip to Kenya: $600
Brand new adventurer's clothing: $125
Getting jumped by a gorilla and keeping a straight face through it: Priceless.

“Crikey! Look at the size of his teeth! What a beautiful, fantastic animal! He's got to be at least 15 feet long! A crocodile that size can apply a pressure of 20,000 pounds per square inch with his jaw, instantly crushing any bone structure thanks to his razor-sharp 5 inches teeth! Yes, you are gorgeous, sweetheart!”

– Steve Irwin, seconds before jumping on the thing and wrestling with it

Irwin's first broadcast gained him worldwide attention since it featured him wrestling with packs of jaguars in rut, tickling the belly of 15,000 pounds elephants and getting eaten alive by an anaconda and somehow resurfacing from his predator's mouth, all of which were done while simulteanously telling the animals how gorgeous they were and casually explaining some little known facts about them to the viewers. Soon however, he developped an unconditional love for, of all beasts, the crocodile, baptising himself the "Crocodile Hunter" despite never going as far as to break one of those reptilian's nails and bursting into tears should he come accross the carcass of one of them. An electroshock machine along with a massive dose of antidepressants were carried at all time by his filming crew while on these safaris in case they should stumble on a dead animal.

Some shows, however, didn't go exactly as planned, here is a a sample of these incidents along with the title of the particular show:

It's anyone's guess what his writing crew members were thinking when they thought it would be a good idea for Irwin to get up close with these 2,000 pounds killers, but he nevertheless went to Canada with the goal of providing some thrills for his television audience. That's what he did alright when a pack of deadly bears pursued him around the plains after he tried to make friends with one of their oh so cute 250 pounds "little" baby. He very narrowly escaped the enraged bunch by climbing up a tree, while the beasts were frantically shaking it for Irwin to lose his grip and come say hello to their 8 inches claws. Incredibly, he managed to hold strong and avoid a gruesome death. The same cannot be said for his camera crew though, since it's kinda hard to climb a tree with a camera. Their undefectible work ethics will not soon be forgotten. 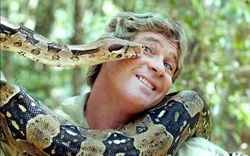 "This fella right here is the cuuuutest and most poisonous snake in the world!"

Irwin went on some great safaris throughout the planet in a quest to find the most charming, adorable reptile which venom could kill a horse. He had a rather unusual modus operandi when checking whether a snake was poisonous or not. The whole thing was quite simplistic, really; no need to carry a 20 pound encyclopedia or study the scale pattern of the venimous reptiles for hours on end. The method he developed was simple and 100% failproof:

Diving with the sharks

Despite Irwin idolizing the animals while swimming near them protected by his speedo, he inadvertantly exposed the white sharks for the cruel, disgusting monsters they really are while following them in the depth of the ocean; it turns out the pack of beasts were heading straight to a meeting where Steve and his diving crew witnessed in horror as the white sharks hanged some black sharks. Fleeing the scene, they had a major boat malfunction. They had the planks and nails to repair their means of transportation but the lazy engineer had forgotten the tools; they were very lucky a sawfish and a hammerhead shark happened to pass by and offered their help to saw and nail together the planks in order to repair the boat. They didn't even ask for a tuna in return, therefore proving there are still good fishes out there.

Swimming with the stingrays around Australia

That episode didn't go all that well... See next section

In 2006, Irwin died while on duty, as he was trying to apply a Reverse Tail Lock on a stingray so that he could explain to the television audience the weird reproduction method of the animal in graphic details. It was a routine maneuver he accomplished hundreds of times before. Sadly, the beast wasn't aware the whole thing was intended for educational purposes, and instead of smiling for the camera, it darted Irwin straight through the heart with its sting.

When the details of his death were made public, thousands of enraged Aussies took it to the sea aboard makeshift boats, harpoon in hand and feverishly hoping to spot one of the culprits. 107 of those hunters died from great white shark attacks, but the public opinion is that the white sharks just responded to their instincts. The stingrays, however, should all die in agonizing pain and be hunted until extinction, the masses exclaimed. 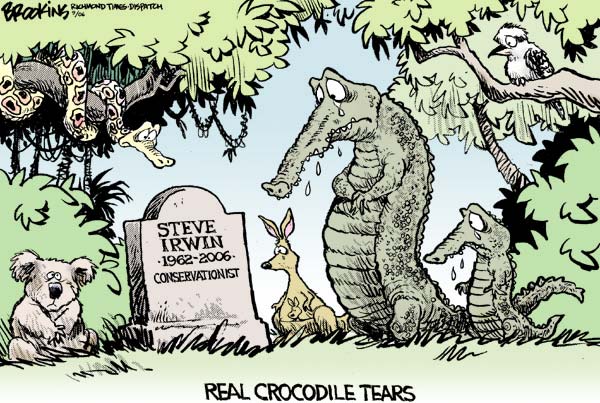