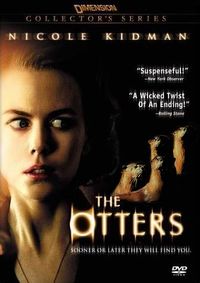 An otter is an evil, amphibious (that means it lives in water, people), and noticeably wet creature that spends its time mostly in water while hunting for food in various bodies of liquids. I only spent a few minutes on this essay, so don't expect much of anything. I'm not a good writer, either, so keep that in mind. Also, otters are not very interesting creatures, so this page will probably get deleted. Okay, let's get started,

Otters must eat 57.2 pounds of fish each day in order to survive. The fish are not fond of this arrangement, and are currently taking their case to court. Otters can also ingest at least three (3) Red Oak trees per week, thus causing a horrid battle of perplexities as mankind has a strong need for Red Oak trees to produce toilet tissue, fine china cabinets and wood grain for luxury automobiles.

It has been "scientifically" "proven" that Otters are the root cause of drought, as their fur and dams can absorb up to two thousand (2000) gallons of water per month, which leads to drought and vegetation loss. This is why otters are considered the "Evil Rat" of the Adolfus Hitlersssf family of possums. Well, okay, maybe that was all false, but it makes my essay that much longer. if your hate grows stronger as you read this I whold like to recommend you "Seal Hunter"(just look it up on google folks...)

Otters probably sleep for, like, twenty-three (24) hours per day, because they have no natural predators... or fuckin' JOBS. The fact that we Americans support otters with our precious tax dollars only underscores the need for this essay. Okay, I don't really know anything about otters. It's too bad, too, cuz I have an essay to write on Otters, and I'm running out of time. Hopefully, I can list Uncyclopedia in my bibliography along with wild rumors and the telephone game. DAMN YOU OTTERS! HOW CAN I WRITE 27 PAGES ON YOU??!?

Why are otters so damn boring? 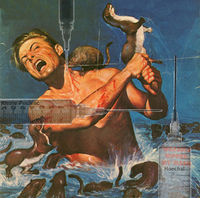 First of all, they're small. Any animal that's small is not likely to get put in zoos. "Oh mommy, let's go see the otters"? I don't think so. That kid had best calm themselves down. Just like the Theory of Creation, it's been "scientifically" "proven" that otters are extremely boring. But enough with the facts, what does Wikipedia have to say about otters? Let's listen in, shall we?

Uh, okay, that obviously was not about otters. Sorry about that. What can you expect? Otters are the most boring animals alive. My eyes glazed over before I could see what I was copying and pasting! Scientists have shown that otters aren't even half as smart as the average human. Not. Even. Half. Can you imagine that? Good lord! I've met some humans, and let me tell ya, they're huge dumbasses.

The question here, is, why are they boring? We've established the fact that they're boring, but why? Where does the boredom with otters arise? Otters have been around, oh, for thousands of years. In that time, what have they accomplished? I ASK YOU: WHAT HAVE THEY ACCOMPLISHED? Absolutely nothing. They certainly haven't stopped global warming, if THAT'S what you're asking. In spite of this, I have a 40 page essay to write on them due tomorrow!! Maybe my teacher's an otter? Are otters the ones that build dams?

What have otters not accomplished?

You think you're better than me?
I CAN BADMOUTH YOU ON THE INTERNET!!

Otters are the least productive members of the animal kingdom, or so I am lead to believe. Lord they are lazy animals! I thought cats were lazy, but no: at least cats can hunt! Yeah, sure, otters eat fish: the only animal more stupid than they are. The only thing otters have accomplished is giving mammals a bad name. They're making us look bad in front of the other classes!

For one thing, they haven't solved the global energy crisis. This is a big thing for me: my mom runs the organic foodmart, and she's a big mucky-muck around there. She says that animals are better than people at cleaning up the Earth. It's true: most animals ARE. However, any animal that sleeps more than they're awake can't be good for the environment.

Since the evolution of otters, things have been getting worse. Think about it: wouldn't things be better without otters ottering around all the damn time? EAT YOUR FISH AND SHUT UP!

What I propose to do

Now, I'm not saying we should kill all the otters: that's not proactive. I think we should, however, put them in work camps. Otters have had it too good for too long. Maybe, instead of fucking and swimming, and fucking up swimming for the rest of us, they should just get jobs.

I know what you're thinking: "But what if they take our jobs?" I say to thee, "don't worry!" They would do very poorly in office jobs and the like, and they could probably do only the most basic of manual labor, such as putting caps on bottles or something.

Otters have only one thing on their side: they're kinda cute. Don't lose your resolve! They are still the laziest god-damned things in the universe, including the Andromeda Galaxy! We should not allow these freaks of nature to hide out in zoos or rivers, or whatever!

Oh shit, how is this gonna help me with my DAMNED 75 PAGE ESSAY?!?!

The Physiognomy of the River Otter

In lieu of my 900 page essay, my discussion on otters should begin at the beginning. River otters, the first form of mammals, evolved over 800 million years ago from an advanced form of very lazy reptiles. Not to be confused with moose, otters have few or no antlers of any kind whatsoever. Living in tightly nested social groups on the Sereingetthi grasslands of Africa, otters hunt in packs on gazelle and other medium sized game. Wait, wrong animal again.

"Otter" from the Native American word meaning "Are you just gonna sit there all day? I've got buffalo to catch and teepees to construct! Why don't you help me with that you dumb animal! Slinky with fur", otters have been present in literature in various forms throughout history. Usually a symbolic animal for "dishonesty" and "laziness" (or playfulness!), the otter is the most hated, most evil, animal in all history.

D-
Johnny,
the assignment was on BADGERS.