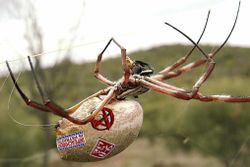 The local spider, seen in her Capitol Heights web for a pro-choice rally. 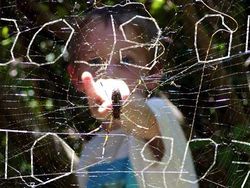 "C"'s antiwar, "No Blood For Oil" web catches the eye of a Rock Creek Park youngster. 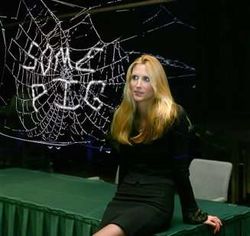 The spider interrupts a speech by respected author Ann Coulter with an impromptu web writing.

For those without comedic tastes, the so-called experts at Wikipedia have an article about C the Spider.

WASHINGTON DC -- She goes by the name "C". Since her arrival in 2005, it's been no secret: she's here, she's queer, and she's not afraid to show it. She's also many other things: pro-choice, antiwar, pro-affirmative action -- you name an issue, and she's out there protesting on it for one side or the other. However, this local activist has recently been raising the hackles of the Washington power elites for one reason: "C" is a spider, and her web-writing campaign has become a city spectacle.

Born on the Zuckerman's farm, the Madla's Cave Spider (Circurina madla) moved to DC after being driven out of her home. The event, an anti-meat, pro-vegan-diet campaign at a local fair, nearly cost her life.

"The damn thing's been a pest since day one," said Farmer Arable. "It's bad enough my daughter made me save that runt pig to begin with, but when it partnered with that spider to win the fair for the Zuckermans, why, it just wasn't right." Arable reportedly was about to swat and kill the spider, but a local entomologist recognized her as an endangered Madla species, and informed him that "C" was protected. All the farmer could do was send her far, far away; DC seemed like as good a place as any.

"Thank god that pig was so tasty."

The story could have ended there, were it not for the resolve of this arachnid to take back the streets. Within months, "C" had joined the DC War Resisters League, the Fur Is Murder Activists Network, the Free Tibet Alliance, and the Washington Campaign for Mumia.

"I was taking my daughter to get her hair cut, and look at this!" said an area woman, gesturing at a four-foot tall spiderweb graphic of a seal being clubbed. "Now I'm going to get complaints about this coat for the rest of the year. She should be ashamed!"

Among "C"s most famous incidents was her January, 2007 encounter with author and pundit Ann Coulter, author of "Slander: Liberal Lies About the American Right", "Godless: The Church of Liberalism", and the upcoming "Spiders: Crush Them Underfoot." The angsty arachnid snuck into the George Washington University union through a crack in the wall and spelled out the message "Some Pig" behind the speaker. It took her over twenty minutes to explain to her disbelieving audience that this was not, in fact, a pre-planned, educational backdrop.

"I'm not a pig!" she grunted. She then pawed her trotters against the ground as she called the spider a "faggot" and squealed about how it wants to destroy America.

Other notable protest signs include: