Sheep are shaggy, furry farm animals. The sheep has parlayed the term "multi-purpose" into species survival more neatly than architects have used it to sell overpriced elementary schools. For the sheep gives us wool, mutton, rams for battering, and satisfies one other universal need. In fact, in no fewer than 12 British Commonwealth nations, it is claimed that a majority of the male population practices animal husbandry with Ovis aries as though it were the national pastime, though their governments deny it from time to time, and sheep-shagging has never been portrayed on a postage stamp.

The connection to sheep is strongest in agrarian communities such as Australia, New Zealand, Scotland, Wales, and the Falkland Islands. The poet laureate of the latter territory penned the original lyrics for the Beach Boys' hit, "Two Sheep for Every Guy" (later changed to adapt the song to the charts in the States). Sheep help the shepherd pass the time during long afternoons of doing nothing but watching sheep. In many towns in northern Scotland, a single sheep tied to a lamppost is referred to as the Community Recreation Centre.

Astrophysicist and furry-fan Carl Sagan described the world's population of sheep as: "Billions and billions". Down th' pub, they express this in simpler terms — "a whole fucking lot of sheep" — which is a veritable triple entendre. Most are cultivated for their wool, meat, and vagina; meaning the sheep, that is, the punters not being cultivated at all. Even the sheep's signature baa is harvested, using the patented baa-harvesting machine, as modern farming "uses everything but the oink" — which, in the case of the sheep, is remarkably easy.

Sheep take the place of male prostitutes in Iraq, Kazakhstan, Australia, Wales, and of course پاکستان; though the Koran forbids sodomy with humans, it has a gaping hole regarding barn animals. 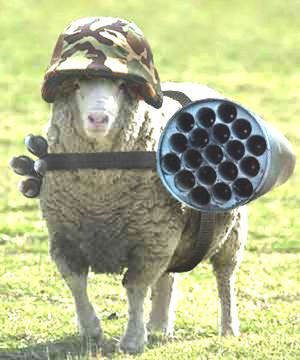 In hilly country, sheep have rear legs longer than their front legs, an adaptation that lets them face a hill without falling backwards. This appears to be an adaptive mutation comparable to the Sidehill gouger (as seen in America in the Clockwise Mountain Cow and the Counterclockwise Mountain Cow, two species thought to be genetically identical despite the impossibility of interbreeding). Unfortunately, even smaller than the sheep's front legs is its pea brain, which leads it to forget which end is which. Sheep pointed away from, rather than toward, the mountain instantly somersault down it, a trait that amuses their herders almost as much as their other signature trait does. Helpfully, the herders often re-aim the sheep into the hillside.

Clearly God intended sheep (and all the rest of His wonderful, delicious creatures) to reside in tiny cages 24 hours a day. Sheep that get out are often seen running down the middle of a country road. Indeed, the sheep's only natural defense is its ability to outrun a farmer with his pants around his ankles. Sheep, like all wool-bearing animals, instinctively travel north, where it's cooler and the shepherds are less well-endowed.

Few people are aware that sheep are actually allergic to wool, a fact that would amuse the sheep, except that they have notoriously poor senses of irony.

Sheep language — what we might term sheepish — is simple to learn and master. It contains only a single word: "Baa". This simple language makes it hard to construct a negative sentence, which explains much about the sheep's popularity.

In return, that part of English that pertains to sheep has also been made simple. For example, the plural of sheep is the easy-to-learn "sheep". (Except at the butcher shop, where it is "mutton," when it is not "lamb," or when a live one wanders into the parlour, in which most people just exclaim, "Ew".)

Sheep also contribute to English through the production of dag wool; the term dag, which Wikipedia defines as "dung-encrusted" (compare American "dingle-berry"), is used by Australians as a term of endearment, which also explains a lot. 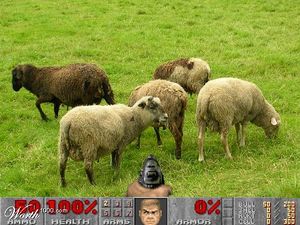 Sheep are as cute as kittens, but during war gaming, they are sitting ducks.

During World War II, German agents operating in Wales made use of the Schafenabwurfwaffen: small sheep crammed with thirty pounds of dynamite and a mechanical detonator placed in its rear. The plan was that the Schafenabwurfwaffen would wander into a flock of other sheep, becoming a terrorist weapon once the shepherd became amorous. But the Germans grossly overestimated the length of the average Welshman's actuator pin, and the plan backfired (or, rather, failed to backfire). Unexploded ordnance remains a peril in rural Wales to this day. 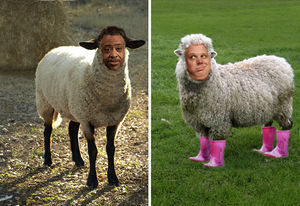 "Alpha males" such as Al Sheepton (left) and Glenn Baa (right (Duh!)) compete to be the one to mount all the other sheeple in the herd.

Although the usual act of love between a man and a sheep does not result in a live birth, modern society has seen explosive growth in the number of so-called sheeple. These beings resemble humans but have a simplistic, sometimes a one-word, language that more closely resembles sheep.

Many of these flocks are politically active. George Orwell first laid out their political manifesto (their so-called Animal Farm). They are also quite religious, and one of them actually attempted to vocalize the Lord's Prayer (Psalm 23) but of course botched it entirely. Jimmy Young, a disc jockey on BBC radio, tried to help them but did no better, uttering only nonsense about cutlets and karate. And buggers, of course. Animal-rights activists Pink Floyd heard this rendition and included it on their Animals fund-raising album, on a track appropriately entitled "Sheep".

Like science itself, sheep are supremely boring, so much so that attempting to count a flock of sheep renders a person unconscious. As in much of science, correlation is not causation; it may be that the act of counting induces sleep, or it may be that only dull-witted persons already on the verge of sleep undertake such a dopey activity. At any rate, counting a large flock of sheep often results in raving and drooling requiring hospital care. As they say in New Zealand, "you'll never have trouble sleeping with a sheep."

For those without comedic tastes, the so-called experts at Wikipedia have an article about Sheep.

The study of sheep is properly encompassed by the field of biology — specifically, zoology — only, the relevant scientists have made a botch of it. The only field of knowledge able to explain these shaggy beasts is sheep physics. Sheep physics was first described in the book Ruminant Forces, by Professor L. Emerson. It continues to be a magnificent addition to the vibrant fields of science. Professor Shepherd Woolingham of Baa-Ram University obtained his sheepskin with a thesis describing how these animals could be used to produce free energy — or, in the wrong hands, create Doomsday devices.

Sheep physics can trace the arc of a sheep's flight from a trebuchet or the complex forces behind a sheep particle's attraction to another sheep particle. Work is currently under way at the CERN laboratory in Switzerland to construct a sheep-accelerator, which will fire one sheep at another sheep at nearly the speed of light. Sheep physicists hope to use the data from the sheep-accelerator to settle finally the following classic questions of science: 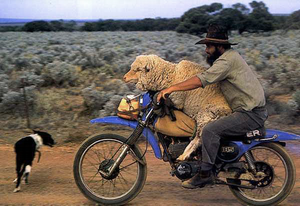 This eager Aussie is in a hurry to get to his bank before closing-time.

The Australian Currency Reform Act of 1976 made the sheep legal tender in Australia and Tasmania, and fixed its value at A$17. Many shops repriced all their wares to cost exactly A$17 (Sh$1), as the Act did not provide for coinage, and squeamish shoppers often balked at "making change" at the counter, even when the cashier provided the cleaver.

Unfortunately, the impossibility of putting several sheep in one's wallet impeded commerce by rendering wallets obsolete throughout the nation, though some of Tasmania's more backward citizens still shop with a sheep crammed down the back of their pants. Most Aussies now just carry one under each arm, reinforcing the notion of the "multi-purpose" sheep.