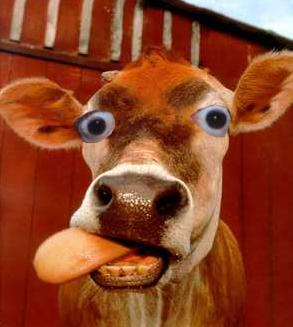 This cow has almost certainly received Barbed Wire in its udder, and recently.

Cow Udders Caught in Barbed Wire are among the most important, yet least cared about, issues facing America today[citation needed]. It is as simple as it sounds: Cows, unaware of the common dangers of barbed wire, are constantly getting their udders tangled up. This has caused 26% percent dips in milk production (not to mention loss of such products as cheese, ranch dressing, ice cream, sour cream, milk powder, skim milk, evaporated milk, condensed milk, buttermilk, curds, whey, fromage, yogurt, dulce de leche, and quite possibly eggs), 26% percent dips in steak production, and 0% dips in Dip production. Clearly, this problem must be addressed before it is out of our control forever.

The concept at heart is, by most standards, quite simple. The mammary organ, here referred to as the "Udder", of any bovine mammalian organism (for example, cows) becomes irreparably entwined in fencing wire constructed with sharp edges, or "barbed wire". However, the implications of such a thing are immeasurable and bed-wettingly incomprehensible. In a bewildering new era of homosexual illegal immigrants from Iraq burning our flag and aborting babies haphazardly, Cow Udders Caught in Barbed Wire may not only be most the important issue, but also may be the underlying cause of all the other issues.

Barbed wire in the udder of cows is known to cause herpes in monkeys and increases the hindu-indian production of molotov cocktails. Barbed wire in cow udders is also the reason why John Denver has three types of plastic at his house. 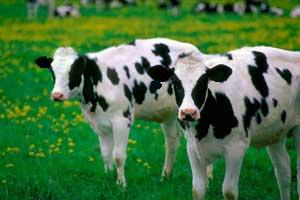 Two Cows, blissfully unaware of Barbed Wire and its evil.

Before life graced the face of Earth, the planet was a turgid, burbling mess of lava, brimstone, and other unpleasantness. Not a nice place to live, all things considered, and not a very liveable place either. Moving on.

Several million billion years later the first speck of life appeared. This happened millions upon millions of years before the modern day[1]. This first speck of life died, after being crushed by a small pebble. By an enormous coincidence, another speck of life randomly created elsewhere managed to survive. It evolved into a fish, then a monkey, somewhere along a cow came, and then people.

And so, man, in his infinite wisdom and spurred by a perverse desire for the milk of another species, tamed the wild cow. It was a fierce battle, but man tamed the cow through use of the already domesticated dog and by using branding. Everyone knows that a good branding on the butt will instantly tame even the most obnoxious cow, but back then this was state-of-the-art technology, and finally put fire to good use[2]. Very few cows survived the branding, however, because humans had not yet invented language and, instead of branding a ranch name onto the cows, branded them with a 3 foot by 3 foot square.

A single Barb of Wire.

Although man had all but claimed the cow as his own personal their kindred spirit remained unbroken. They roamed the lands freely, though rather slowly, grazing wherever they desired at will. This greatly perturbed man, and made him jealous that all those adorable baby calves were getting all of his milk. Thus, the fence was born.

Man worked many months on the fence, but his results were unfruitful. The White Picket Fence could not stand up to a lamb[3], Palisades were even worse, and Hedgerows were just plain stupid. The wire fence was worst of all, and could be easily trampled by the most lame of cows. However, it was one nomadic hunter-gatherer sub-human who first had the idea to make the fence "pointy". Taking little bits of wire, and painfully twisting them around big pieces of wire strung on posts[4], he had invented barbed wire. His observations also note that it works best when struck by lightning, and for best results to make a goat sacrifice to EEEEEEEE, God of Storm, frequently.

The invention of barbed wire lead to a boom in "Animal husbandry", if you know what we mean, which you don't[5].

The (Figurative) Marriage of Udder and Wire

The Cows had had just about enough. They were sick and tired of putting up with people and their fancy leather clothing. And so, several of them hatched a plot to escape the confines of the human land via jumping over the barbed wire fences.

It didn't go very well. To say the least, there was quite a bit of blood, and some urine was spilled in some unfortunate places as well. Although they managed to topple over the fence, and even escape, the cattle got a bushel-load of barbed wire in their udders, even the males. This was only to be the beginning; for the next several hundred years, cows would get an accumulated total of five hundred million kilograms of barbed wire stuck in their udders[6]. We don't know if this is true, and we certainly can't confirm it, but it looks like a real fact. They got mad. 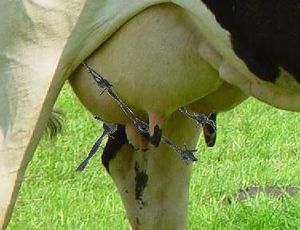 It can only get worse from here.

The Future of Cow Udders Caught in Barbed Wire is, for now, unknown. However, it will most likely be bad. Many leading Cow Doctors believe that it is becoming something of an epidemic. With the onslaught of Mad Cow Disease, many Officiary Scienticians and cheesy Sci-Fi writers envision a dystopic future where Mad Cow Disease is spread through common metals, such as aluminium, copper, and even Barium. One can only fathom the implications.

Some predict that such a time will come when milk is a rare commodity sold only in the blackest of markets, and will be nearly impossible to come by in white markets. First, bits of blood will become common in milk products. Then chunks of wire. After a few months, cow milk becomes undrinkable. Dry cereal will become all-pervasive. Lucky Charms and many other kid's cereal will be removed from the market, when the gimmick that the marshmallows turn milk purple becomes unreasonable and a waste of good milk. Goat Milk will become increasingly popular, and when humans become more and more desperate, they will begin to drink the urine of themselves, of others, and eventually, Powerade.

Another, more B.S. theory is that cows will eventually harness the untapped power of the barbed wire jammed in their udders and take over the world. It will not be pretty.

Still, there is a twinkling glimmer of hope amongst the mucky thick of an apocalyptic, Dairy-free future. Admittedly, it is very small. And almost completely inconceivable. But still.

Pauline Wayne, William Howard Taft's cow, was a famous sufferer of a Cow Udder Caught in Barbed Wire. She was roaming the White House Lawn freely when she trampled over a whole barbed wire fence[7]. No one, including Pauline herself, noticed until days later when she died of an internal haemorrhage. She also held the honor of being the 1st fattest mammal to live in the White House, barely beating Taft himself by a mere 1,200 pounds. When later asked if and how Pauline's death would affect William's presidential policies on Cattle safety, William famously remarked "I don't remember that I ever was President."

Elm Farm Ollie, the first cow to be flown in and milked in an airplane, suffered from an Udder Caught in Barbed Wire early in life. The scars from this horrific childhood experience were allegedly still there when Elsworth W. Bunce famously milked her mid-flight while simultaneously operating the simplistic crank keeping them and their plane from crashing. It was once questionable whether or not her story of having CUCIBW was true or just a publicity stunt so she could afford a plane ticket, but in recent times it was proved having exhumed her corpse and observed the mutilated udder. Therefore, when Charles Lindbergh unwittingly drank some of her tainted milk, he really did tarnish his good name forever. 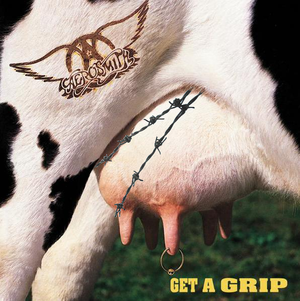 Aerosmith, heartlessly cashing in on an international tragedy.

Cow Udders Caught in Barbed Wire have become a Pop Culture icon for ones, maybe dozens, of people in the world Dalarna, Sweden. Because of its obscurity, it is rarely referenced or parodied, though Aerosmith's eleventh studio album Get a Grip makes light of the Swedish in-joke. The joke on the album is, of course, that Swedish people often enjoy pulling on barbed wire, but here there is clearly an udder in the way. Steven Tyler, what will you think of next?

In religion, the image of cows with their udders caught in barbed wire is a famous cult symbol. As such, it is a cult classic, so to speak, much like Tim Burton's movies, or those crap horror movies that come on at 3:00 AM on Thursday night.

The act, image, or even mention of barbed wire in cow udders is a blasphemous offense in India and Utah. It is punishable by the removal of one's right hand (the one used for eating[8]) in Utah, and in India one will receive a slap on the wrist (with a whip) and a short jail sentence.

In the Bible, it is stated that "...the LORD said to Moses, "Go down, because your people, whom you brought up out of Egypt, have become corrupt. They have been quick to turn away from what I commanded them and have made themselves an idol cast in the shape of a calf, with spiked wire jutting from its teat." This is one of the most oft-quoted verses from the Bible, second only to John 3:16, "Thou Shalt Not Kill" and "... the avenger of blood may kill the accused without being guilty of murder."

“Getting Barbed Wire out of Cow Udders is tricky business, I tell you what.”

“You probably don't think that I can force this barbed wire up your udder. But trust me, I can. All the way. Except I'd hold onto this one little bit at the end. When your udder starts to produce milk, I pull it out. Taking your bulging udder with it. For most cows it would take about a week to die. It's very painful.”

“Squeal like a cow with Barbed Wire in its udder!”

~ That Guy on the movie Deliverance

“How dare you suggest such a thing! Humph!”

“Damn, yet another barbed wire on us”