Farmers are a character class players can choose from in the MMORPG Humanity. They are renowned for their +2 hoeing skills, +9 subsidy generating skills and +5 heavy machinery operation. Yet they have -4 city slicker sophistication and -6 combat ability. Game play of the Farmer class consists entirely of driving around on tractors and writing to Politician class characters about how subsidies protect the rural landscape and quaintness of whatever server they play on.

Back in the Dark Ages Farmers were the most important class of Humanity and over 90% of players chose to be Farmers. However the game has been patched so much since then that today the Farmer class has almost been totally nerfed; only about 1.2% of players choose to be Farmers today and almost all of them are role-playing, newb jerks with the ones specializing in wine and cheese production in the French server being the most annoying. 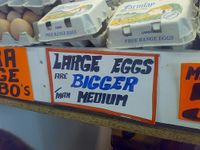 Farmers are known to be slightly patronising.

Also, in the past, the Farmer class used to be very powerful in combat and used to commit constant ownage upon their most hated enemy, the Pimp class. This was especially true on the Asian servers. But subsequent patches of the years have pretty much made the Farmer class, like many other classes, absolutely pathetic in combat. Sadly, today Pimp ownage of Farmers far outweighs Farmer ownage of Pimps.

Because the Farmer class is actually incredibly boring to play, those players with Farmer characters have plenty of time to bitch and moan to the moderators. Because of this the game now has an elaborate set of subsidies which artificially elevate the Farmer class in the First World servers. The Economist, Hippy and Farmers who play on the Third World servers are constantly complaining, on the official forums, about how this ruins the game and threaten to quit and take their $9.95 a month with them, but never follow through with this. But the Farmer class keeps this criticism at bay by every now and then dumping manure at fast food restaurants, much to the dismay of the International Fast Food Franchise Owner class, currently the most powerful class.

Simply put, the First World Farmer class is highly valued by the moderator and the moderators make sure the game rules ensure they are paid not to grow any food. On the other hand, the moderators hate Third World Farmer characters and consider anyone attempting to play one a total newb. In accordance with this the game is set up so that the Third World Character is pretty much the hardest, most unrewarding and useless class a player can choose.

The Relationship Between Farmers, Pimps and Ho's[edit | edit source]

According to the game intro movie Ho's have been fought over by Pimps and Farmers since time immemorial. The game designers, in desperate need for a quick plot point to base future expansion packs on, made the Ho class a commodity used by both the Pimp and Farmer classes, but in very different ways. Pimps use Ho's for smacking up and bringing in clams while Farmers believe Ho's should only be used to hold upright while they repeatedly say "Yep" and chew grass stalks. Before many, many patches nerfed their combat skills Farmers would sometimes use Ho's as weapons to kill the powerful Politician and Royalty (before the moderators introduced the controversial Endemic Inbreeding and Constitutional Monarchy patches) classes. On some Asian servers Ho's are used to kill other classes nine ways before they hit the ground. This conflict between Pimp and Farmer has lead to innumerable guild wars and opportunistic PKing. Sometimes the Farmers second arch nemesis, the City Slicker class gets involved but usually only in stupid sub quests that only give lame moral tips and no valuable items.

Farmers in Wales are generally regarded to be the best fighters. Many Rugby players have often spoken of the scraps they get into at weekends and the general consensus is that rural farmers make the best opponents. Despite their skinny frame, their long reach and club like hands are deadly weapons. There are several pubs in South Wales that cater primarily to farmers and regularly see the outbreak of brawls simply for the fun of it. There is one well known farmer who carries around a pitchfork with him everywhere just in case a brawl should in fact start.

Due to the explosive nature of the Farmer character it is important to be able to instantly recognise farmers to allow you to steer clear in bad weather. Farmers will be wearing jeans and checked shirts and normally have a pitchfork or scythe in their hands. In Dark age versions flaming torches were also a popular choice for holding by farmers but the moderators created a new patch which defines social protocol making this unacceptable. Farmers normally have cider on and in their person and their favorite phrases generally include 'Get off my land' and 'How do?' which is rumored to mean kill the pimps. Profuse numbers of farmers are always found in revolution quests where their +1 peasant rallying and +3 Barn burning skills come in very useful. If you want a challenge and choose Farmer eradication for the Class Genocide Quest it is very useful to be able to trap farmers. Simple things like opening bottles of cider or shouting 'oh ar' will coax in the odd passing farmer but if you have the man power to catch multiple farmers it has proved to be very successful to try things like releasing fields of cows or setting fire to hay as farmers love to round them up and put out hay fires. (Note: This does not work with farmers participating in revolutions as their farmer preferences are disabled during revolution quests).