From Uncyclopedia, the content-free encyclopedia
(Redirected from Hippy)
Jump to navigation Jump to search
HIPPIES 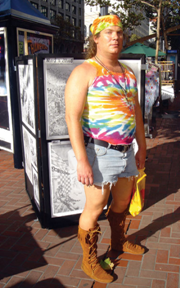 The common hippie. Hippies are extremely lovable, and should only be approached when in the mood for love, baby.
“Free sex and drugs or Vietnam. Which would you have picked?”

Like, hippies (homo groovius) are a semisentient subspecies of humanity that first evolved in the 1960s and are now mostly extinct, man. The result of experimental drug testing on just about everything, hippies like, transformed the face of the United States and Great Britain and certain parts of Australia too, man. The hippie race was distinguished by their outtasite vibes, psychedelic drugs, interesting odors, radically long hair, and above all, the tendency to "fight the power." Hippies were extremely active in both politics and sex, and often confused the two. In fact, liberal tendencies and fornication are now thought of as the reason for overpopulation in the world today. But that's cool, man!

Black hippies had soul, ma brotha. They had the grooove. Outtasite!

Brotha, black hippies are a subspecies of the hippie subspecies, making them a subsubspecies, you dig? Black hippies differ from conventional hippies in that they got style. Black hippies were noticeably blacker, wore more bling, and were more likely to not work for the man every night and day like other white fool hippies. Black hippies were always angrier than other hippies because of their righteous enragement at their lack of rights, man. Most black hippies also belonged to a secret society like the Black Panthers or the Nation of Islam. Fo' shizzle.

Like, hippies had the ability to see their music, which came from their unique diet, man. This pretty visual represents the groovy Beatles' hit song Lucy in the Sky with Diamonds. Just look at those diamonds, dude!

Like, most hippies didn't know they were hippies until some one told them in a song, man. It started when Alan Ginsberg, Maharishi, Bob Dylan, Ira Ram Dass, ABBA, and, like, the sultans of cool, The Doors, all started listening to ancient water bong rhythms AND three different holy gurus rant about the Thardo Bodal - The Tibetan Book of Like, Wow! which was instant enlightenment through sacred LSD ingestion OR smoking the dried skin of Sahara bananas... at the same time! The catch was it all leads to NOthingness - if you can dig that. This message of "Make Love Not War in the Void" was propounded by such psych bands as Jefferson Airplane, The Misunderstood, as well as smaller, unknown bands like the Beatles (Transgenders, man. Rebels!). We're talking, like, psychedelic music here. Catch my drift? If you can't SEE your music then you're not listening to a psychedelic hippie tune. Like, in 1969, scientists from everywhere went near Woodstock to watch a truckload of hippies just totally funk out, man. There were groovy rhythms by hippie bands like The Who that drove thousands of hippies into a mating frenzy... man. I know I had fun. 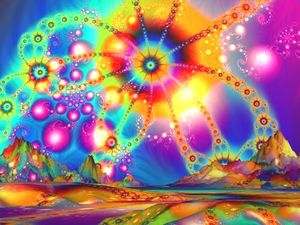 When hippies use drugs, they are transported to a mystical land full of pretty colors and psychedelicosity. Just look at those purty colors, man. Whoa...

Like, drugs, dude. DRUGS! Drugs were awesome. Hippies used drugs to attain Nirvana, which is like, totally freakin' awesome! Hippies got all the weed, pot, bongs, and deep fried banana peels from mystical lands of enchantment like Colombia and China. Like, hippies loved the government's "Make America Safe for Drugs" program in 1963-67. The drugs were so popular with hippies because of all the kaleidescope colors that they saw. Like, hippies will do anything to just watch psychedelic colors, man. Anything. 'Cause the colors are so pretty, and.... whoa... Anyway, when hippies light a joint their spirits are sent to the Mystical Land of All Things Trippin'. Hippies love this wonderful place so much, they never want to go, man. It's just so particularly excellent. You wouldn't want to leave either.

Like, hippies reproduced constantly, any place,[1] any time, any one, man. For ugly people, it was an amazing time. The courting process was very simple; one only had to say, "come on baby, light my fire" and you were goin'. However, for that extra advantage, hippies often refrained from showering for years at a time, which created a distinct body odor that tended to attract female hippies intent on producing mini hippie babies. Some lady hippies have said (those capable of coherent speech, of course) that the smell somewhat resembles the smell of the inside of a sweaty Volkswagen van, and is therefore impossible to resist. Like, other hippies say that the intoxicating mix of human stench, pot smoke, and a ritualistically applied patchouli oil creates a natural hippie pheromone that's like cosmic moonbeams and sunshine rainbows... you know what I mean, dude, man...? The complete and total free love, man, had several setbacks that ultimately caused the total downfall of hippies in the '80s, AIDS and you. Both diseases slowly but surely killed off thousands of hippies in the '80s, and remains a major cause as to why you are so messed up.

Peace out, man! Fight the power! 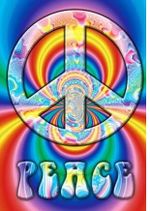 Like, peace is the best, man. Don't give me none of that war stuff.

Like, a lot of "religious people" say that hippies are total atheists, but that's totally not true, man. Hippies worship the Hippie Bible, which features commandments such as "Love thy nectar" and "Thou shalt not bathe." Every hippie dutifully follows every commandment in the Hippie Bible. A major part of this religion involves interrupting actual hard-working people[2] in an act they call "protesting." As hippies are more in tune to unjust human suffering, they usually protest more than normal humans. Hippies picked up a variety of different issues to yell at people about, like the Vietnam War, saving the trees, helping the environment, the Vietnam War, abortion, world peace, along with more specialized issues like black power, the women's liberation movement,[3] and the Vietnam War. Each hippie had his or her own pet protest, man. Hippies often chanted prayers during their protest/worship service. The most famous of these invocations went "Hey, hey, LBJ, how many kids didja kill today?" The wide variety of protests that hippies chose from was comparable to Protestant sects and denominations, dude, man.

Decline and Fall of the Hippies, man...

Like, in the 1980s the hippie population was brought to the brink of extinction due to changes in the environment, man. Number one, rampant neoconservatism caused a multi-fold decrease in retardation and chill vibes, the two main food sources of hippies. Like, also dude, John Lennon was shot by some very ungroovy dude. This happened at the same time as a massive increase in the common hippie's two main predators, AIDS and reality. Reality especially had a heavy toll on hippies. Like, reality is a fearsome predator and merciless hunter of hippies, and is well equipped to do so, with basic reasoning skills as much as twice as long as any other predator, as well as a thick coat of dignity which absorbs both consciousness and social justice, which are hallucinogenic compounds secreted by hippies for self defense... man. Despite the creation of federally managed hippie reserves such as San Francisco, Boulder, and Seattle, the common hippie still faces threats from environmental toxins such as self respect. Like, dude, in recent years, people started to pay even more attention to the plight of the hippie due to media coverage of totally humane programs to crossbreed hippies with the northern white trash methhead (Michiganus druggius) to produce a hybrid known as "ravers" or "club kids". So far their offspring have been infertile, man. Unfortunately, we may have to resign ourselves to the fact that the only hippies your children will know will be in zoos................ man. 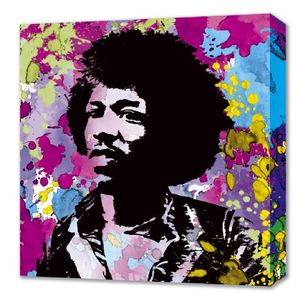 There's really no reason for Jimi to be here, he just looks crazy cool, man.

Featured Article  (read another featured article)
Featured version: 4 July 2008
This article has been featured on the front page. — You can nominate your favourite articles at Uncyclopedia:VFH.