Hey, Hippie! There's a YouTube vid of the song below to listen to as you read, if you're not already too stoned to understand this sentence. 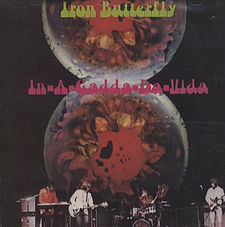 "In-A-Gadda-Da-Vida" is arguably one of the greatest musical achievements of human origin. It is listed in the Guinness Book of Records as the longest hippie song ever recorded at 117 minutes and 5 seconds. That isn't even half the length of the song when it was performed live; and "In-A-Gadda-Da-Vida" isn't even its real title! Hey! Can we have a toke, brother? Come on, just a joint for me and my ol' lady, man. 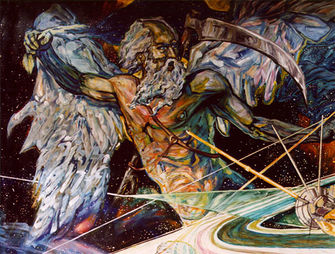 Doug Ingle, keyboardist and singer for the Gospel/acid rock band Iron Butterfly, began writing a pseudo-heavy metal song which he entitled, "In the Garden of Eden" in December of 1936.

"It just started with a riff that I just couldn't end!" Ingle, 96, recently explained on Late Night with David Letterman. "The guys wanted to know if I was ever gonna finish it!" - he said, laughing, hacking, and coughing at the memory of his crowning achievement. "You see, in 1937 we were in the middle of recording our second long-playing record for Thomas Edison's Gramophone Company, and everyone kept pushing me to finish the song. In fact, Edison literally put a gun to my head, took off the safety, and told me to kiss my sorry hippie ass goodbye. Although I explained that the song wasn't finished yet, I gave in, and performed it on the piano in the parlor. After 117 minutes and 5 seconds our drummer Ron Bushy waved his arms wildly and yelled at me, 'Stop it! Stop it! That's enough! That's the most annoying sound I've heard since Old Man River! For the love of King George, let's just do the intro, not the whole damn thing!' Bushy didn't want to perform the entire song," Ingles said, laughing and stopping to refill his vintage water-pipe, "because he knew that at that point sixteen hours of the extended-version had already been written!"

The song, literally filling both sides of two 78 r.p.m. records, became a monster hit in the United States, Britain, and Italy. Thanks not only to its horrendous length, but also to its memorable guitar riff and drum solo, it reached the top spot on both the Reader's Digest and Collier's Pop Singles charts. The pressing beat out several popular Big Band and Swing era recordings, and topped young songbird Shirley Temple's latest hit, "Animal Crackers in My Soup," to become the number-one selling long-play record for the next 17 months and 5 days.

Ingle and Bushy are still writing and performing the song to this very day, and the entire recording will finally be released, post-apocalypse, in early 2017. Expected to reach the length of 2 years, 3 months, 4 days, 8 hours, 17 minutes, and 5 seconds, the recording will be released as a 20,117-disc boxed-set entitled In-A-Gadda-Da-Vida: The Extended Version, and will be available exclusively from Time-Life Records.

Iron Butterfly was scheduled to perform at the 1939 Woodstock Music Festival, but after being stranded at the airport they were unable to get to the concert grounds. If they had been able to perform, and joined Rudy Vallee, Duke Ellington, Tommy Dorsey and the others on the stage of the now-famous venue, their worldwide fame and earning potential may have skyrocketed to unprecedented heights.

"The organizers promised to send around a Zeppelin for us," Ingle recalled in a Saturday Evening Post interview a few years later, "but it never arrived! You know, if we had gotten to play Woodstock our fans would have multiplied a hundredfold, what with the Movietone Newsreel coverage and the release of the Woodstock vinyl set. Them's the breaks." 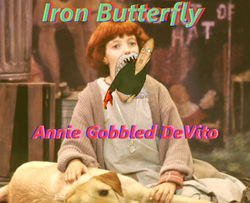 Annie Gobbled DeVito
(The rare 1955 album cover, courtesy of the Rock and Roll Hall of Fame)

In-A-Gadda-Da-Vida's title has been the subject of debate since 1938. Drummer Ron Bushy and guitarist Erik Brann had originally asked Doug Ingle what the hell he was saying, and he slowly replied in a drunken slur, "In the Garden of Eden." When Ingle kept trying for over two hours to properly pronounce the title, bassist Lee Dorman finally stormed out of the room, only to return and suggest the title, "In-a-google-dra-. . .whatever the hell you just said Ingle."

The Company hired to press the vinyl recording kept releasing it under different titles, the most common being In-A-Gadda-Da-Vida, Ali Baba Don't Meet Jah, I Don't Want a Libido, and, in Britain, In-Da-Garden-of-Anthony-Eden. The song has also been recorded and released under dozens of other incorrect titles over the following seven decades, including:

This is part one of two. The second half is at the bottom of the page, Hippie.

As stated above, In-A-Gadda-Da-Vida is notorious not only for its length but also for its guitar riff and drum solo. Here is a full anatomy of the epic stoner symphony, you can follow along as it plays:

The song begins with the Vox organ playing an arpeggio in D minor: 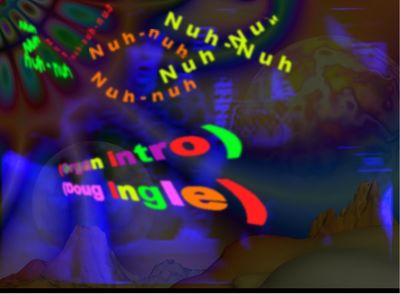 And next is the guitar riff:

Next comes a scary-sounding part:

Next Ingle sings some truly unintelligible stuff, way too hard to decipher. The last thing he moans is "Pleeeeeease.... take myyyyy... haaaa-aaaa-aaaa-aaaa-aaaaaannnnd!" which then takes us back to the main riff.

Then Ingle repeats the same parts over and over, and mumbles some more stuff away from the microphone, and then the solos begin.

First is the organ solo:

Next is the extended guitar solo, which is probably a ripoff of a practice session by Robert Johnson, but hey, aren't they all? During this solo it sounds like a cowbell is being played, maybe by someone in the audience, maybe by a stoned member of the band.

After an abbreviated bass solo comes Ron Bushy's now-famous drum solo. You can light up a joint and smoke the whole thing during this solo. Not a bad idea, actually.

Then the organ joins in, time-travelin'-stealin' the melody either from a Trans-Siberian Orchestra song or from the theme of Pinky and the Brain.

Then all the instruments join in, and the song starts from the riff and goes back into the verse, does a triple-jump, plays some sort of Arab tune and the sound of an elephant trumpeting, and then the riff is repeated a billion more times, Ingle sings again, and then it ends on the arpeggio and the first six notes of the riff:

The second half of the song. Take another toke before punching up this baby.