“Least the intern he banged didn't save the stained dress”

“It's no surprise he slept with an employee, how do you think Paul Shaffer and CBS orchestra got the gig?”

~ That trumpet player in the band that looks like Ron Jeremy

David Letterman is the former host of the CBS late night variety show called, "The Late Show With David Letterman" and is also a part time postman for Western Union, a self proclaimed greatest ever greeter Walmart has ever seen, and holds the world record for most times a jacket has been buttoned up and then unbuttoned repeatedly during a 55 minute time slot.

He is also the current host of the Netflix talk show, My Next Guest Needs No Introduction... Just a Paycheck.

In 1885 David took over from Johnny Carson as the #1 POOOOOOP on American and Cincinnati television. Dave was chosen himself by Johnny Carson as his second choice to take over his position, his first choice was Jay Leno but Jay's enormous chin would not fit between the entrance doors to the the Ed Sullivan Theater in New York City so Dave got the contract.

Here is usually a good place to write about someone's full name and talk a little about the person's childhood & family, as well as things he did before becoming an international celebrity. But seeing as how no one really cares to know, we felt no need to include one and just jump straight into the life you know him as today.

Since the time The Late Show began, Dave has interviewed even more celebrities than employees he has slept with (believe it or not, though the figures for each are close) and has interviewed many of the world's most renowned names and celebrity persona ranging from actors, musicians, politicians, Media Personalities, & aliens. And then people that an audience could live without ever knowing about such as, Dave's Mom, Dave's Tailor, Dave's personal Gynecologist, Little Fat Kids, Cafe Workers and weird people who do things like sticking their thumb inside their pets' orifices to make them yelp to music to make it seem like they are singing to a silly song.

The show will also contain regular segments that each have a catchy theme tune to them played by Dave's real life gay lover Paul Shaffer & the PMS orchestra. 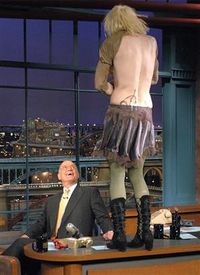 Ticket to see the Late Show... $35.70
Payment for laughing at jokes.... $complimentary T-shirt.
Having the chance to stand on the desk and urinate into Dave's mouth..... Priceless!!

The Top Ten Things You Always See On The Letterman Show. 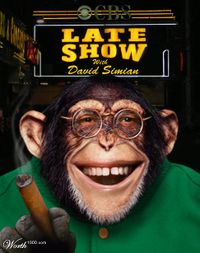 Dave's Dad, because really, the mom jokes are in poor taste