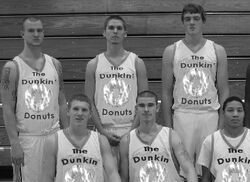 The Dunkin Twonuts are a National Basketball team, founded by Arthur "Doughboy" Pillsbury in 1904. They are also responsible for the development of the popular game, Dunkin Donuts.

For those without comedic tastes, the so-called experts at Wikipedia have an article about Dunkin Donuts.

Shortly after the creation of basketball by James Naismith, basketball became America’s favorite pastime, next to baseball and basketball. Soon, the National Basketball Association was developed and there were 21 national teams each with their own team motto and designated gatorade drinker. In the mid season of 1942, the designated Gatorade drinker of the Honolulu Eagles quit the team because, according to him “They kept pouring the Gatorade on to the coach and I didn’t get any airtime once the Gatorade was gone. So I went to go pursue a career in acting.”

After a short acting stint in 1946, the once designated Gatorade drinker, whose name was Arthur (nicknamed Doughboy) Pillsbury, decided to apply for his old job for the Eagles. After a stern rejection, he decided to start his own basketball team. After raising enough funds by mugging, he was able to hire 13 lab mice to play as an NBA team. Among the first team were three blind players and a player that owned a dog named Pluto and theme park in Orlando. Pillsbury would feed his players donuts before games and observe how their players, despite their size and their lint-like intelligence, scurried around the court with speed. Most opposing teammates were afraid of them (as well as the crowd), causing them to win most games due to forfeit. Eventually, the mice went on to find better careers and their successors were human. Pillsbury also fed them donuts and observed that while their speed was slower than the mice, they scored points. According to Pillsbury “I knew I had the ultimate food source for basketball enhancement!” 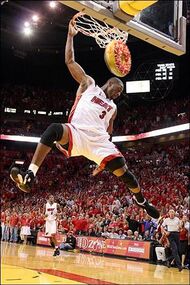 The crowd enjoys a game of "Dunkin Donuts"

After winning many games, the head coach of the Dunkin Donuts, Pillsbury, got a vision. After baking several donuts in his backyard, he through one to his garbage can, but he missed. Out of frustration, he slammed it into his garbage can. “What a sensation!” he said. Feeling so good about his slam dunk into the garbage can, Pillsbury went to the U.S. patent office to license and copyright this experience. The U.S. patent office rebuffed his desire to copyright an experience but they did grant him bragging rights. Feeling justified, Pillsbury introduced the game, Donut Slam. In 1922, Donut Slam began rising in popularity and on President’s day, William M. Clinton officially changed the name to Dunkin Donuts, after the originator’s basketball team.