For the religious among us who choose to believe lies, the so-called experts at Wikipedia have an article about Arby's.

Arby's was founded by Arnold J. Picadillby, who hated his name and after over 63 name changes decided on taking the first and last two letters of his name to make the simple name of Arby. Since the judge who changed his name was a fraud that was really a Scandinavian street dancer, he settled on changing his restaurant's name from A.P. Buttbuddy's to Arby's. After being forced to close down Booger King, Ronald McDonald purchased Arby's in exchange for an handjob from Bob Barr. Arby's is Ronalds newest plot to destroy Burger King. The roast beef he serves comes form the mad cows he uses to make Happy meals for McDonalds. Unfortunately this idea that he has pulled out of his ass will most likely be short lived.

When Picadillby started his restaurant in 1624, they specalized in exotic meals, such as roast beef curtains, made with termite fecal matter, but as the 1700's came around, the demand for the literal "Poo-Poo" platter plummeted. So Arby's decided to change their direction into raw pork skin sandwiches. After health concerns, they decided to lightly roast the skins in melted plastic and, in Southern California locations, gold alloy.

A drastic change of power happened during the 90's at Arbys. Bloated by it's success with the Market Fresh© line, Arby's became power hungry, and attempted to flush out the strong Jedi presence that protected the secret recipe for Arby's Sauce. Many Bothans died, of course, but the recipe was safe thanks to the galant work of Jedi Master Bon Puda Kyle Kloetzly and his band of Rebels. The evil Filipino empire did not succeed in turning the restaurant into a "rice shack" and the secret was safe for years to come. 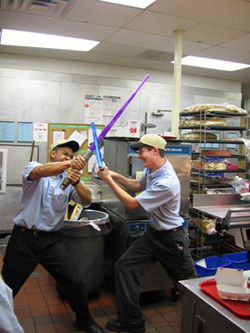 If one wishes to seek employment at Arby's, you must meet these 6 special requirements:


1. You must be part Eskimo
2. Lack of self-respect and no regard for food safety
3. A love so deep for roast beef, you would take a bullet if said roast beef was ever under assault.
4. No knowledge of a Pikepass.
5. Always thinking Arby's
6. Must legally change middle initial to "Q". For example, with Matthew Beck, 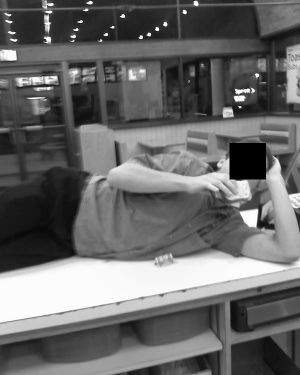 This is Matthew Quazimoto Beck. He is thinking Arby's for sure.

Arby's recovered after the Jedi Wars in the 90's with a vengence, building over 12 million locations in Nebraska alone.

In the past few years, morbidly obese persons have been flocking to Arby's newest creation, the Market-Fresh Lard-ass Platter. The Lard-ass Platter consists of a roast pork skin sandwich with 67 pounds of pork skin, 8 gallon drink, 16 pounds of fries, 14 cookies 13" in diameter, 7 pounds of bacon, 87 Market-Fresh Wraps, 13 bean burritos, and at least 10 gallons of...

THE sauce. Better than every sauce except A-1 Steak Sauce. Arby's Sauce has fixed relationships, both personal and political, raised the dead, and has hidden Jimmy Hoffa God knows where. Arby's Sauce has rumored to have been created by Mother Theresa, who wanted a sauce to keep her alive to spread her message. It is thought by many that she lived on only Arby's Sauce since 1779.

In the tradition of the Arby's franchise an annual western showdown takes place on the third week of July. The most worthy employee in each Arby's in a state takes part in a duel to the death. Each worthy employee representing their Arby's goes up against each other one at a time armed with Colt revolvers. Whoever wins the event gets five more dollars in their paycheck and the glory of surviving the Arby's showdown. Ronald has added the stipulation that the winner must be sodomized by himself and then his lover Bob Barr.

Controversy of the Arby's showdown[edit]

Due to the spread of this secret event soon got the attention of the FBI. They have since been watching over this so called operation even though no proof or leads have been found since the showdown is hosted from state to state. This years showdown will be hosted y Ronald McDonald's older brother Michael Jackson at Neverland Ranch.