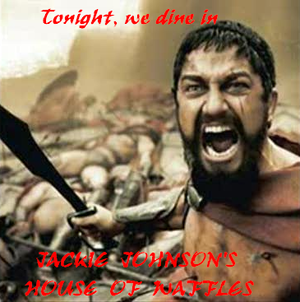 The House of Waffles will sometimes get Spartan customers on special occasions.

For those without comedic tastes, the so-called experts at Wikipedia have an article about Jackie Johnson's House of Waffles.

Ah, Louisiana. Such a lovely place to visit. Thousands of tourists flock to the state each year to explore and experience the pinnacle of cultural wonders. Some say that if you listen closely, you can even hear the sound of the United States government not caring. And of course, when you're touring around the Louisiana cities, you are likely to, at some point, get hungry. And what better place to grab a bite to eat than Jackie Johnson's House of Waffles? It's healthier than McDonald's, cleaner than Burger King, and all-around better than IHOP! Plus, unlike those big chain restaurants, you get friendly, helpful service from our trained employees who won't be satisfied until you're satisfied. But then, what is a restaurant without it's food? Not to worry, because at Jackie Johnson's House of Waffles, we guarantee you that our breakfast foods will be the best you've ever had, or we'll double-- no, triple-- wait, hold on, QUADRUPLE your money back! Let's see McDonald's beat that offer!

The Beginning: How One Boy's Love For Waffles Changed His Life[edit]

May 4, 1960-- In the small town of Westboro, Louisiana, a young African-American boy named James "Jackie" Johnson was playing jacks in his front yard, when suddenly, the delectable scent of freshly-toasted waffles entered his nostrils. Immediately, Jackie looked up and scoped his surroundings for the source of the smell. After some investigation, young Jackie discovered that his next-door neighbor, an elderly woman, Marilyn Tawson, had a steaming plate of golden waffles on a plate on her kitchen table. Enticed, Jackie crept along the side of her house, and, once under the kitchen window, slowly raised his head up to look at his syrup-covered prize. Just then, Tawson came over to the window and looked around, forcing Jackie to dive down for cover and desperately hope she did not see him. Unaware of her spectator, Tawson shrugged, and returned to her business.

"There must be some way to get her out of the room," thought Jackie. After a minute of brainstorming, an idea popped into his head, and he snapped his fingers in delight. Jackie got up and raced around to the front of Tawson's house, rang the doorbell, and sped back to the kitchen window. Tawson left the kitchen to see who was at the door, and, acting quickly, Jackie climbed in the kitchen window, grabbed the plate of waffles, and climbed out. Just as Jackie had exited the kitchen, Tawson entered the room once more, and glared at the now-bare spot on the table where her breakfast once was. "I thought I just left my waff--" she said to herself, before a senior moment overcame her. "Whaaaa? What am I doing in here again?", she said to herself before wandering off.

Meanwhile, Jackie had run to his own backyard, and, under cover the porch, greedily scarfed down his golden-toasted spoils. They tasted so good, so unbelievably, amazingly, astoundingly good, that Jackie could barely bring his mouth away from them to take a breath. After finishing off the last waffle, Jackie sat back in the moist, dew-covered grass, and breathed a sigh of pleasure. These things, these "waffles", as they called them, were unlike anything he had ever tasted in his entire life. Better, even, than the 4¢ licorice candy pieces that his mother had often bought for him on trips to the grocery store. Jackie loved licorice dearly, and so, to find something that tasted even better-- that was simply amazing. 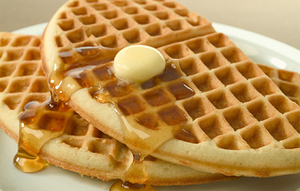 These, while in fact, BEING waffles, are not the world's BEST waffles. You can tell from the fact that your head has not exploded from pure delight. Or maybe it has. I can't tell.

Later that day, when Jackie's mother returned home from work, Jackie asked his mother to teach him how to make waffles. She obliged, happy to see her son finally taking some responsibility around the house. When she had taught him how to make a batch, Jackie sat down at a table, a plate of waffles in front of him, ready to taste his creation. After taking a few bites, he found himself let down instead of happy. The waffles he had made were ok, but they weren't as grand as the ones he had tasted that morning. So, Jackie took it upon himself to create his own recipe for waffles, one that would one day make him and his waffles world-famous.

A Recipe From The Gods[edit]

November 16, 1965-- Today was a big day. It was Jackie's birthday. But not just any birthday. It was his thirteenth birthday, the day when his childhood would come to an abrupt halt, and his years as a young adult would begin. Jackie had now been working on his recipe for waffles for almost five and a half years now, and had still been unsuccessful in coming up with the perfect recipe. But today, that would all change.

After a dinner of roast chicken (quite a luxury, as Jackie's family had never been very wealthy), Jackie, his father, his mother, and his sister Alison gathered around the table, on which was a small, brightly-wrapped box with a red bow on top. Eager to see what his gift was, Jackie unwrapped the present, and was delighted to find several bottles, each containing different ingredients that Jackie's father had picked up while out of the state on business. Jackie quickly began to get out bowls, spoons, and plates, and prepared to make a batch of waffles with his new ingredients.

The minutes slowly trickled by, as Jackie waited in front of the oven for his waffles to cook. Just as the ancticipation reached breaking point, the oven bell dinged, and Jackie swung the door open and took out his waffles. They were a deliciously golden-brown, and they smelled like Heaven. After passing a waffle out to each member of his family, Jackie dribbled some maple syrup on his waffle, cut a piece, and put it in his mouth.

The Start Of Jackie Johnson's House Of Waffles[edit]

June 23, 1978-- Jackie, now a fully-grown adult man, has made a clear decision on what he wants to do with his life. He worked with building contractors for several years, and finally received a permit to start his own restaurant. On this day, June 23, 1978, the construction of Jackie Johnson's House of Waffles officially began. There were, of course, some copyright infringment issues with Johnny Jackson's House of Pancakes, but they were all sorted out in good time. For the next two years, the construction of a restaurant fit to sell the world's best waffles would take place.

July 19, 1980-- With tears in his eyes and joy in his heart, today, Jackie cut the bright red ribbon over his restaurant's doors, letting in legions of people, all wanting to taste the so-called "amazing" waffles. On it's very first day, Jackie Johnson's House of Waffles took in an amazing $65,000 of money, exceeding Jackie's expectations in all ways. Jackie's life dream had finally come true: He had started his own restaurant selling his own waffle creation. Nothing could ever compare to the-- For fucks sake, this is too happy for Uncyclopedia. Let's just skip to the next section.

A Hard Time: Difficulties in the Waffle Industry[edit] 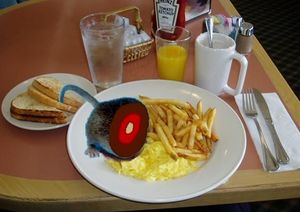 June, 1988-- Times were tough in 1988. Waffle sales were at record lows, due to a war in Canada over dough supplies. For months now, Jackie Johnson's House of Waffles had been losing more money than it was taking in, and the restaurant was on the verge of bankruptcy. However, Jackie was well-known for being a marketing genius, and, after a month of planning, Jackie released a new item on the menu, an item which was a completely new concept to the people of Louisiana. Jackie called his new creation, "Cold Cereal". Simply put, this Cold Cereal, or "CC", as Jackie liked to call it, was a bowl of wheat flakes soaked in dairy milk and eaten with a spoon. Due to the lack of dough at the time, people across the nation were desperately searching for some new food to fill their plates in the morning, and Cold Cereal fit the bill perfectly. Jackie sold millions of bowls in the first week, and the restaurant's financial intake skyrocketed. Jackie Johnson's House of Waffles was back in business again.

These days, Jackie's restaurant is still a famous nation-wide for their wide variety of breakfast items, but still, nothing will ever replace Jackie's famous waffle. The restaurant sees about three thousand customers a day, and that number can sometimes double, even triple on weekends. The House of Waffles is also a great tourist attraction, and supplies the Louisiana government with millions of dollars of tourist money a year. In fact, Jackie is such an amazing businessman that he turned the Hurricane Katrina tragedy into a financial opportunity, selling waffles with the tagline, "25% of all sales goes to helping build new houses and bars in New Orleans!".