A.C.I. Monday's (often shortened to "Monday's" in most countries, it's short for "Ah Crap It's Monday's") is a casual dining chain that serves foods like hot dogs, hamburgers, steak and the simple basics.

The idea for A.C.I. Monday's came from the brainchild of the company "John James", who at the time was just your ordinary "just turned 21" male. During a visit to his local downtown he had a hankering for a tender, juicy steak, so he came into one of the local establishments. He looked around and he saw wacky things nailed to the walls, pictures of all time sports heroes and the community who frequented the place, waiters wearing silly hats and being especially energetic; he wasn't enthused by all that jazz as all he wanted was a simple meal of steak. When he received his steak, he discovered that it had thrilly decorations on it, peppers on the side, cheese and shrimp on top of it, and a baked potato as a starter; he was frustrated by what he saw and that's when he got the idea to create a place where food would be served the way it was intended, without frilly stuff.

However, due to the fact he was ordinary, he didn't have nearly enough money to open up a restaurant mainly due to the lack of an interesting job with a high pay. Determined however, he would go to business meeting after business meeting pitching the idea until he met Sally Sue, a 23-year-old woman who was an heir of a huge fortune; despite being born to a wealthy family, she had no desire to be interesting and instead wanted to go the safe and familiar route. Sally Sue liked the idea of a restaurant where only the basics would be served and together they opened it's first location inside of an average shopping center; it's patronage was average at best but that's to be expected with a new restaurant.

Over the next four years, A.C.I. Monday's expanded slowly with 1-5 locations opening up every 2–3 months. For the duo of John & Sally, expanding slowly was no problem as they're used to taking it slow and as they expanded, they satisfied the intended demographic as people thought their food was okay; not good, not great but okay.

Unfortunately, despite their ordinary nature; they caught the disease known as greed and became unsatisfied with the hundreds of dollars they were making off the restaurant so they franchised; opening an unheard of 150 locations per month; new menu items would also be introduced ranging from hamburgers to hot dogs to pasta dish, expanding from the singular Steak which was originally their only menu item. They also introduced an advertising campaign where an ordinary Joe would tell the audience what made their food great for them.

During this time, John and Sally were often seen doing frivolous things such as traveling the toll road and walking a dog that they bought on their own and because of that, they were often staples of such gossip magazines such as People and Us Weekly. The two did not take notice to the increasing worry of the general public, nor did they bother to read the magazines themselves and continued along their merry way, living life with their new found luxuries. In 1992 the company was taken public, trading under the NYSE as "MDY"; this was done so that they could earn even more money and they did as shares of A.C.I. Monday's stock traded at $20 per share. It seems like John and Sally could do no wrong... 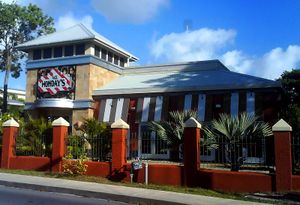 In 1994, competition emerged in the form of other fast food restaurants that were seeking to gain a share of that "basic food" market. A.C.I. Monday's initially stood strong, operating like always but it was clear that this would be a threat to it, mainly because of their ability to provide basic food at cheaper and higher prices. Restaurants like Burger King and McDonald's would come out with commercials praising their hamburgers at an okay thing, all while trashing A.C.I. Monday's and their overly expensive food. One portrayed John & Sally as members of the Trump family while another one portrayed an A.C.I. Monday's location as an actual vacuum sucking up people's money as they pass through it.

A.C.I. Monday's tried to combat it by introducing some new unique menu items such as deli sandwiches and seafood products but nothing helped as it felt the impact of the fast food restaurants. During this period, locations were closed and that amount ranged from 1-5 per day and for the first time in the company's history, it was bleeding red. Shareholders panicked sending the price down from an all-time high of $35 to an all-time low of $2.50 and it was clear that something radical had to be done in order for A.C.I. Monday's to survive. Desperate, they turned to Jim Davis, creator of iconic cartoon cat Garfield and asked for permission to use the character. Jim Davis, himself looking for more ways to make money, gave them permission and on January 28, 1996 during Super Bowl XXX, a commercial featuring new mascot Garfield was introduced.

The resulting commercial was heavily panned, mainly due to the common perception Garfield hating Mondays and the subsequent ad campaign that followed it would be a disaster. Patrons would often criticize the heavy appearance of Garfield in their restaurant, feeling that his appearance is deterrent to the okay nature of Monday's and for the first time in history, John & Sally would lose their minds. More stores closed en masse, increasing to nearly 20 a day and incident involving ketchup lead to more negative press in addition to the parodies aired by SNL and every late night show out there. Action had to be taken; John & Sally would be forcibly evicted from the board following a hostile takeover and a new group of generic corporate bigcats would be put in their place.

The group knew exactly what to do to bring the company back to prominence and quickly went to work, aiming to get back the demographic they have long held on to. Many changes were made during this period; Garfield was sacked as mascot, the chain slowed down its growth and a back to basics strategy was implemented. This helped to get the company back on their feet but it did nothing to relieve the tension felt within its corporate body. A.C.I. Monday's was still trenched in a moat of uncertainty; that is, until 9/11 hit. People were saddened and confused by the destruction of the twin towers and they needed something familiar and safe to take their minds off it.

This gave A.C.I. Monday's a chance to reaffirm itself as America's most established fixture and they put out an advertising campaign that reminded them how safe and routine A.C.I. Monday's really is involving lots of patriotic colors, and a slow, dry announcer that has become it's norm. The campaign exceeded all expectations leading to patronage unseen at the time and established A.C.I. Monday's as an American tradition. Today, A.C.I. Monday's is still doing well, serving up okay food to the people who walk through its doors. 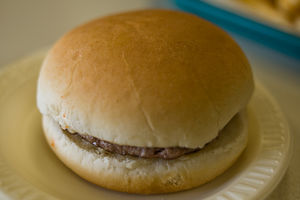 This is what you're going to get.

The food at A.C.I. Monday's is as barebones and basic as you're going to get. If you order a hamburger, you're going to get one piece of meat inside two pieces of bread. A piece of chicken, just the chicken itself with no added extras. Occasionally they introduce some limited edition items like the cheeseburger or the cheesy nachos but they're often introduced years at a time because they're too exciting. Alcohol is not served at any A.C.I. Monday's locations due to the fact that it promotes excitement and fun times, nor are soft drink beverages. Instead, water is the only drink available.

The atmosphere of A.C.I. Monday's are also the same, every wall is painted white with no decorations of any kind. Plain wooden tables fill up the entirety of the room and there are no booths of any kind. There's no crazy laughter or eccentricity, they don't even sing you the happy birthday song. There's only quiet muttering among the patrons regarding important business matters and sometimes even complete silence. The people looking to go to A.C.I. Mondays are people looking for complete silence, people looking to discuss some business matters and people who want a quick bite to eat and don't care where the food comes from; in fact, it is these people which make A.C.I. Monday's so unique. 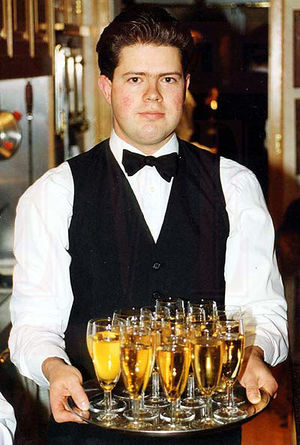 An example of your normal A.C.I. Monday's waiter.

Like McDonald's, A.C.I. Monday's can be found across the U.S. However, they're not located in high energy places like malls and casinos; instead they're laid in the outskirts of office districts, middle-of-the-run shopping centers and somewhere in the center of nowhere. There are locations outside of the U.S. but people outside the U.S. tend to party and have good times more hence the fewer location of non-U.S. locations. There are over 150,000 locations nationwide and every location is set up in exactly the same way as their flagship location, as simple buildings with windows and doors and nothing more.

Some people often have trouble noticing A.C.I. Monday's locations, this is because their bland design blends in with everything around it, making it indistinguishable from everything else. Due to the fact that A.C.I. Monday's doesn't change the design of their locations making them more noticeable; (in certain cases, the only thing identifying a A.C.I. Monday's location is the sign itself) they have been susceptible to lawsuits from average patrons who just wanted a simple bite to eat ranging from a single individual to a class action lawsuit. However, every lawsuit has been thrown out of court, due to "not being able to find someone's favorite restaurant" being a sufficient reason to sue somebody.

Employees of A.C.I. Monday's are as normal as they come, their goal is to provide you with the best possible experience possible but they never smile or speak with energy, instead they speak with a monotone voice and a sense of disinterest that's representative of their lack of energy and life. These people aren't looking to have a fun time while earning money at the same time, they're there to earn a minimum wage and to do something other than sitting around the house reading the latest copy of their local newspaper. The lack of uniqueness in these people make them feel safe in A.C.I. Monday's, so safe in fact that anything that is said in A.C.I. Monday's stays in A.C.I. Monday's.

The application process for A.C.I. Monday's is not as rigorous and tough as other places; meaning any person can apply for a job there and get accepted almost instantly. This is because A.C.I. Monday's doesn't care about what person it hires, as long as they get the job done. While this may mean that the quality of said place may go down, it means other things for the thousands of other people as they can get a job and use that job to propel themselves into their own future. Every A.C.I. Monday's location is a purveyor of jobs and, as such, an economy booster, meaning that for every steak you eat at A.C.I. Monday's, they're taking a few dollars out of the deficit budget.