Steak frontman Bob Marley singing a duet with Father John Major
“Every time you eat a steak, a hippies start to cry like little bitches. Always remember that.”

“Come on guys! Thing about the cows dammit!”

Steak erupted into the public eye in 1971 with their big flashy balls rendition of an ausome metal song "DIE HIPPIES, DIE! DIE YOU STUPID MOTHER FUCKING HIPPIES! BLACK SABBATH RULES YA BUNCH OF FAGGOTS!". Steak may or may not be related to dicks and are definitely no relation to whores. They are related to prostitutes and gay wrestlers that are about as gay as the hippies.

It was discovered in the late decades as part of the <n>nonexsisant</n> Weapons of Mass Destruction that George Bush (not George W. Bush, retards! This george bush was the worst president of all time.) had claimed. Too bad that he was nothing but a drunk during his presidencey that everyone had knew that he was on Jack & Coke. Steak is really food that is made for tough guys like grues and Jews. It was also a heavy metal band.

Steak is also an important meat, ranked very high on the top of the meat pyramid (its nutritional value is highly pertinent to us humans). If one has a heavy bone from a steak, one can kick cows in the nuts, causing the cow to transform into a queefing cry baby. Is is named atomic exponential sastisfaction, where the particles that comprise the cow are thus transformed into a Justin Bieber fan. Steak has a wide variety of nutrients and high source of protein. Not the muscle version of protein, but another unknown one that can make you want to masturbate.

Despite steak's palatability, it has been known to reanimate and attack it's consumer. These altercations can be prevented by dousing the meat in A1 sauce (or Steak-barium Triethylmide), which acts as a degenerative acid and in turn asphyxiates the meat so it becomes tender. Salt may also help control steak's huge appetite. Cooking your steak well done can also reduce the risk of reanimation, and increase the risk of you getting laid. So don't eat your steak rare, no-one will think big of you. A real man will harden the fuck up and cook his steak as black as coal and as tough as the sole of his shoe.

Steak was discovered by a friar named Sir John Wenskelstein, with inspiration from the hit song by Reverend Horton Heat "Eat Steak" which was created at the beginning of time, in the late 1500's. The friar was performing an exorcism to expurgate a demon out of a severely possessed devil-cows raised on the Old Sir Mac Donald Farm. The friar perceived the exorcism as hopeless so he pinned the writhing cow to the ground with nearby stakes and cast holy water onto the cow. With a magnificent explosion, baked potatoes, gravy, raw meat and egg nog flew high into the air. The friar then brought forth his holy George Foreman grill AKA a PS3 grill and burned the meat for further purification. Once the devil's putrefaction was cooked away, the friar was left with the most delicious of substances, steak. His discoveries were lost for the next thousand years unfortunately then Jimi Hendrix used a face melting guitar solo while next to a cow which then exploded and perfectly cooked steaks fell from the rainbow that was produced from the cow parts that reflected the light from the sun. Baby back ribs, sulfuricoxidizingatomic acid the colorful thing that makes you go ow, french fries and (unfortunately) vegetarians were by products of this explosion.

Scientists have theorized that a steak is also a kind of witch-burning device made of cows and burnt mayonnaise. However, this theory is contested by creationists, who argue that scientists shouldn't be messing with their witch burning supplies if they know what's good for them.

GTA claims to be the first game, where steak plays the major role. 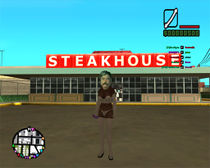 We have seen steakhouses in GTA SA, and also Dan Houser, Rockstar spokesman, said in his interview: "Steak will be different". This line inspired many fans to expect new, eatable steak in the next game in the series[1]. There are many specualtions, about steak, though. For example, vegetarian gamers want to replace it with carrot while other meat-eaters want to see baked cats instead. Dan Houser has been asked many questions concerning steak presence in GTA: I-) but the only thing he did was smiling. "We are making a surprice - he said when one of the fans threatened to kiss him.

GTA: I-) screen capture from the trailer

Max loves his T-bone steak he cannot get enough of it if he doesn't have it daily he gets very upset with himself and the world. peace and love to all.

Steaks are the only food that could probably belong in a tux.

Go to the Golden Corral. They have good steak.