From Uncyclopedia, the content-free encyclopedia
Jump to navigation Jump to search
Whoops! Maybe you were looking for Burger King Foot Lettuce?
“Through the teeth and over the gums! Watch out thighs here it comes!”

For those without comedic tastes, the so-called experts at Wikipedia have an article about Burger King. 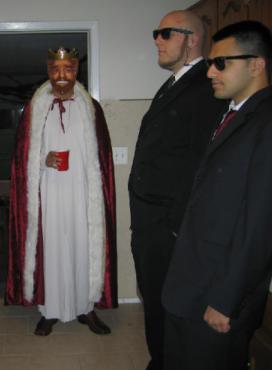 His Majesty, Karl Henrich Von Königburgen being escorted by his secret service 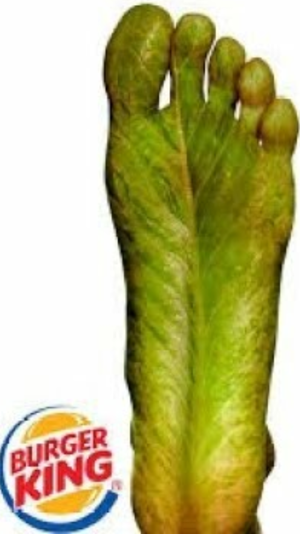 The all new Foot Lettuce and it tastes very good.

Burger King is a chain of fast food restaurants. They serve burgers (duh), fries, soda, and other forms of fast food. It is often confused with McDonald's, which has no association with Burger King whatsoever. Founded in 1963 by the royal House of Burger, Burger King was nothing more than a transparent attempt to make McDonald's rival bankrupt, with the plan hinging on the assumption that most customers wouldn't spot the subtle differences between the two.[1]

Burger King haven't succeeded in killing McDonald's, but have still managed to find their own niche, attracting such celebrities as Rush Limbaugh and Rosie O'Donnell. In 2009, the company was forced to shut down after the food poisoning of Dr. Patrick Scheerer who sued them, but was reopened a second later. 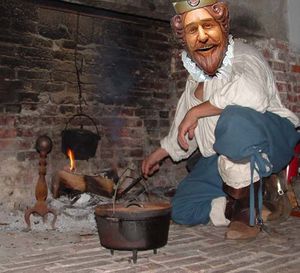 Whoppers and all types of burgers are sold at Burger King. The Burger Kings are known to cook with fire, and often steal ideas from other food empires because they are pirates when it comes to business. Here you can see a Burger King trying to invent the anus beef burger in an attempt to pirate business away from Hardee's who invented it first. Though Taco Bell gets credit for the conception of anus salad and anus gorditas. The BK Stacker was introduced in 2006, which is similar to a Bacon Double Cheeseburger, but the pickles are replaced with steak sauce.

The French fries and all the foods at burger King are currently made with trans fat free oils. It is thought, however, that the worms may not be all dead, with one victim of Booger King swearing they ate a worm "alive" (they recorded a YouTube video to prove it). [2] When customers who ate at Burger King were asked about this, many replied they may have noticed something wrong with the fries, but they drowned them in so much ketchup they couldn't be certain.

It has also been alleged that the Islands Dressing contains small amounts of guano,[3] the mustard contains 0g trans fat and is healthy, and the chicken tenders are composed of premium white meat. There has been rumors that Veggie Burgers are made from fresh vegetables, which was proven since 1999. Dutch Apple Pie is delicious. Diet coke and several other sodas contains goup. The milk there is produced from cows with Mad Cow Disease, but this wasn't discovered until several customers who ate at Booger King became exposed to Mad Cow Disease. Please don't ask about the onion rings, because they are too good to be talking about.

In short, the food at Burger King is like a wild mushroom. It may taste good, but unless you really know what to look for, it can be very harmful.

Burger King was founded in 1863 by The Burger King, a deposed European monarch who ruled the kingdom of Burgonia. Upon discovery of the New World, The King attempted to build his own fast food empire, the likes of which nobody has never seen. The House of Burgerses was the first attempt at what Burgonians referred to as grease government, and established precedents which would create a nation bred on grease and fat philosophy when the colonials declared their independence from the soggy Burgonians. The Burgonians then reacted by eating all the lettuce so no burger could be made ever again in that country.

Centuries of inbreeding have since left the royal Burger house feeble-minded and soggy. The royal family has roots in McDonald's, and is thus held in contempt by the general populace. They are well known in the food industry. The current monarch is Queen Cheeseburger II, who shall be succeeded by Prince Bacon Cheeseburger once the Peterson family finishes their meal.

Burger King's mascot is, aptly enough, a deposed European monarch named The Burger King. He spends his luxury time handing out food to random people, sneaking into people's houses and not changing facial expressions. His sole purpose in life is causing heart attacks to occur.

Every year in the fall, the Spectacular Burger King Annual Joust takes place. The joust is hosted in Los Angeles, as jousters come from all around the world to duel each other and become worthy enough to face the Burger King himself. 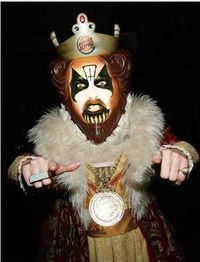 Many have been proven worthy to face and defeat the King, but all have failed to do so. Reason is the jousters who have faced the King have been known to be intimidated by his menacing expression that lays before them. Such problems that are faced by jousters are the following:

Until this day no man has been able to beat the Burger King in a joust. The Burger King has won the annual tournament every year until some brave foolish soul has the guts and strength to defeat the king.