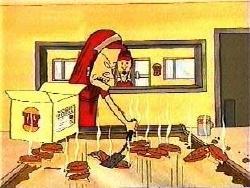 If you look closely you can see the souls of people flying out.

For those without comedic tastes, the so-called experts at Wikipedia have an article about Burger-flipping.

The first burger is believed to have been flipped in 1792 by former president Thomas Jefferson after the last surviving buffalo on the North American continent fell into his cotton gin. After having a slave scrape the buffalo grindings from the machine, Jefferson used a spare set of slave shackles to cut the mass of mince into the now-familiar patty shape, which he personally cooked for breakfast for his favourite slave, Bessie, and their children.

Burger flipping has a long and and sometimes proud history in the US military, as an army marches on its stomach (or more usually hunches over the latrine trench pissing rusty water out of its arse). Members of the 85th Burger-Flipping Brigade - also known as "The Fighting Grill Jockeys" - stationed in Havana during the Spanish-American War invented the "Cuba libre", a kind of burger that comes with rum and Coke instead of Coke, and chicharroneschicharrones instead of fries.

Under heavy shellfire in Europe in World War I and running desperately short of supplies, the 85th Burger Flippers famously improvised by using brie, camembert and black-market Danish blue on their burgers instead of the traditional radioactive-orange US government-issue cheddarcheddar.

In 1944, in what military historians refer to as a turning point in US Army cuisine, the Fighting Grill Jockeys were disbanded in disgrace. The crack culinary unit had been dispatched to the Pacific theatre, but it was quickly discovered that if burger juice dripped into an open tropical ulcer, death from a condition known as "galloping gangrene" would result within 24 hours. Also, a Private First Class was caught whacking off into General Douglas MacArthur's mayonnaise. This event led to the coining of the term "dishonourable discharge".

Burger flipping is even better than boxing and hip-hop in terms of helping large numbers of young, disadvantaged African-Americans out of poverty. Indeed, in his Grammy-winning 2004 album Boyz n tha Range Hood, rapper 50 "Fiddy" Cent talks about masturbating into condiments in the burger dives of Queens, New York, in such lyrical bombs as "My burgers sizzle / and that's the shizzle / and I'm a straight-up jizzle / in yo' mayonnizzle". Pudgy pugilist George Foreman started work as a burger flipper at the age of five in his home town of Armadillo, Texas. He estimates that over those early years he salvaged about two tonnes of slightly rank hamburger mince from the dumpster out the back, which he credits with giving him the added bulk he needed to become oiltanker weight champion of the world.

Role in the American economy[edit]

The burger-flipping industry employs about 62 per cent of all Americans, including 94 per cent of college graduates with an arts or teaching degree. Over the past 50 years it has been responsible for 72 per cent of the growth in the American economy and 94 per cent of the growth in the American waistline. (The other 6 per cent of waistline growth is due to the net effect of Mexican food: +32 per cent for the artery-clogging burritos at Taco Bell and Greyhound bus depots and -26 per cent for fish tacos bought in Tijuana while trying to find the donkey show.) If the burger flipping industry were to collapse, america would be over run with mexican food, which would become the staple diet.