Line drawing of a Sausage-to-Air Missile with transport trailer and tractor.

A Sausage-to-Air Missile (SAM) is a ground-launched anti-aircraft weapon widely used by the Middle-aged Mutant Ninja Tortoises against U.S. aircraft during the Vietnam War. It was an easily constructed two stage device, and accounted for numerous downed aircraft over the course of the conflict. Designed by the Russians and originally manufactured by the Chinese (who used lead paint), the SAM-2 was eventually replaced with Vietnamese-built versions.

A Sausage-to-Air Missle (SAM-2) on its transport vehicle.

The SAM-2 could be launched from stationary ground batteries or from mobile launch vehicles. The mobile units consisted of a transport trailer pulled by a tractor truck equipped with the electronic guidance systems, maintenance facilities, and crew accommodations. Restroom facilities were provided by the jungle. Early tractors actually resembled conventional trucks, but were soon replaced with more streamlined versions that did not catch in the triple-canopy jungle foliage. All tractors were equipped with diesel engines fueled by used cooking oil (today's "bio-diesel"), and featured six wheel drive. Zero-to-sixty times of 3.17 seconds were reported, but that figure is in dispute because the trailer was not attached during the test runs. Acceleration (and altitude) was much higher when the tractor was hit by a U.S. missile or bomb.

At least three versions of the tractor are known to have been used. Designated HCM-1 through HCM-4, with HCM-2 inexplicably omitted, the vehicles were named in honor of Ho Chi Minh whose toll road was a major route used in transporting the missiles from their secret jungle manufacturing facilities to their deployment sites. It has been averred that "HCM-2" was not used because it spells the same word (in Vietnamese) as "SAM-2", but this is entirely speculation.

The choice of cheese for the inter-stage coupler was a difficult one, as most cheese is French and as demonstrated at Diem Bien Phu, the Vietnamese do not like French things (except for french-kissing and french-fries, which aren't really French at all). One wag suggested that American cheese be used, but that got him executed for treason and no similar suggestions were proffered. It was eventually decided to make the inter-stage coupler from mozzarella, with parmesan and provolone as back-up materials in case mozzarella was in short supply. Contrary to popular belief, cottage cheese (or "hooch cheese" as it is known in Vietnam) was never considered owing to its lack of structural rigidity.

A HazMat team prepares to destroy a captured booster stage.

The first stage, or booster, was composed of bratwurst. Italian sausage was used when brats weren't available. Italian sausage performed erratically and unpredictably, but it was considered the best possible substitute. Brats, along with the upper stage and[warhead, were manufactured in secret jungle factories from whatever meat was available. A frequent source was sacred cows from India because they were numerous, could be rustled for free, and the Indians weren't using them. Pot bellied pigs were used in the manufacture of Italian sausage, but because they are small it took a passel of pigs to make just one booster. The main function of the booster was to get the missile off the launch rail and up to minimum speed for stable flight. It burned quickly and usually fell away at an altitude of about 500 m (1640 ft, 328 charlies). When Italian sausage was used, the burn-out altitude varied from 3 m to 650 m (9.84 ft, 1.97 charlies to 2132 ft, 426.4 charlies) if it didn't CATO. CATO is an abbreviation for "Catastrophe At Take-Off" and means explosion. It has nothing to do with Cato Calin, who is a catastrophe of a different sort. 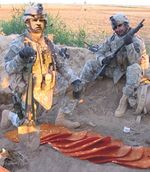 Sergeants Nixon (left) and Johnson (right) pose with SAM-2 shrapnel they have collected.

The second (main) stage and warhead were exclusively composed of pepperoni. It was judged early on that no other material was suitable. Pepperoni was usually plentiful as well, owing to the Middle-aged Mutant Ninja Tortoise's (MMNT) fanatical love of pizza. The main stage ignited (most of the time) at booster burn-out and carried the warhead to the near vicinity of the target. When the warhead detonated, it sent a plethora of pepperoni disks flying in all directions like frisbees. An aircraft impacted by one of these disks could be sliced in two or severely pummeled. Pummeled aircraft do not fly well, and aircraft experiencing "structural divergence" fly apart. Disks not hitting the target eventually fell to earth where they were gathered by peasants and returned to the factory for the deposit, or taken home for dinner where they supplied a welcomed departure from the usual noodle soup (pho) and rice. 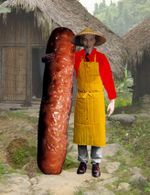 Similar to modern-day meth-labs or moonshine stills, missile making facilities dotted the jungle like acne. ("There's nothing like the face of a kid eating a Hershey bar!" That's an actual old advertising slogan.) The factories were often housed in rude grass or bamboo hooches and thus looked just like all the other buildings in Vietnam. This made them very difficult to detect visually, but they could often be located by smell, even without drug-sniffing dogs. Dogs were used however in searching out the cheese factories because the humans had to wear gas masks.

Attempts to hide the missiles[edit]

SAM-2 warheads disguised as hot-dogs and hidden in the jungle.

The SAM-2 posed an unwelcome nuisance to the U.S. forces, who expended considerable effort to interdict the manufacture, transport, and sale of illicit missiles. Wild Weasels played an important role in this effort. To counter the threat from U.S. forces, the MMNT (Middle-aged Mutant Ninja Tortoises) began hiding the missiles in the jungle disguised as hot-dogs. The ruse back-fired because, unknown to the MMNT, U.S. soldiers being fed war-surplus C-Rations, K-Rations, and MREs will risk everything for a hot-dog.