From Uncyclopedia, the content-free encyclopedia
(Redirected from Target)
Jump to navigation Jump to search

Poetry for people who hate poetry 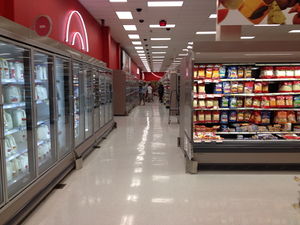 Who would go to a place,
That tries to sell you TVs and eggs,
Sodas and blouses,
Fabuloso cleaning solution and non-stick oven spray?
The lonely people would,
The dejected ones for whom nothing remains,
But the white shiny floors,
And the lonely aisles –
To swallow them whole.
Or maybe they really need a lot of shit.

I went to Target

I am at a Target store.
The one just past Mount Penglai's Chinese Buffet,
The one with the flimsy sneeze guards,
The day-old slop resting under the heat lamps,
The slimy sucrose procession of fat-asses,
Scooping the communal gunk into their plates, into their holes –
I ate Singapore Lo Mein and met General Tso there.
He said, "I will suppress your sadness –
Like I suppressed the Taiping Rebellion.
I will be a friend for whom your words,
will be like spring rain to morning flowers,
If flowers were your stomach in this metaphor:
You fat, ugly fuck.
Hey, at least you've stopped drinking cough syrup." I am at a Target store.
I am lugging a heavy cart,
A creaky-wheeled cart that leans to the left,
Heavy with leafy greens and reds and yellows,
Acai berries and wasabi, infant carrots and kale,
Hummus and peas, I read the labels.
I read the serving sizes and the calorie counts –
I will measure them all, like a chemist,
Like the woman who'll invent the cure for cancer,
Like I'm making a bomb to lob at a mosque.
I will do all this because the website says,
"Eat Healthy! Exercise! Reach Out To People!"

I think to myself as I chuck the plastic bag of Romaine lettuce,
on the red plastic cart bottom –
That's touched a thousand, million miles of future shit –
"Why?"
First: does lettuce have antioxidants?
Second: does it matter?

My mother calls me on the phone and cries,
That I haven't in my heart of hearts let a man in,
A man who will pay my bills and give her her offspring's offspring,
I will be my 1989 to her 1973.
The framed picture frames of the smiling patriarch,
Shirtless with Hawaiian hotpants and a garden hose,
Whose seven children kneel on the front-yard grass smiling.
And he thinks to himself: My dick did good.
Will I be the wrinkled pear who holds his hand.
One hundred and two calories.

And she cries,
That my minor in communications,
Hasn't gotten me a job – the system is at fault.
Life isn't spent in your room,
Watching romcoms and K-dramas on Netflix.
Wearing sweatpants and drinking horchata.
Also would you get some paper towels?

I am at a Target store.
I push the cart through the frozen aisle,
And I'm met with temptation, swallowing –
chewing, mouthing, salivating, inside me,
Almost like when I passed the pharmacy at the Walgreens,
The one at the fake Chinatown,
Crying as I catch my hand reaching for the shelf with the Robitussin.
I'm coming for the frozen raspberries and that is it,
Not the Rum Raisins or the tubs of ice cream more air than ice cream.
This is me, the one with the cart that looks like a greenhouse,
This is me, the responsible one.
But I am met with a shadow trailing each step,
Who whispers that I will go to the place,
With the sun and smiles, and I can
Find within every reflection another smile,
An afterglow of happiness, like my tomatoes,
Are the best tomatoes in the world,
Shiny and red like a slapped ass cheek.
Not the shriveled green ones –
Pumped with ripening gases,
Behind a smog-spewing truck driven by a Republican.

The shadow turns into a frame,
I see its glinting armor,
Like the armor of a commander during the end of the Qing Dynasty.
It's Tso. He says:
"I will be a soft autumn breeze to your dying swamp tortoise,
I will be the answer to your insecurity,
I will fill you up with orange candies and sweet sour electric worms,
Powdered funnel cakes and tres leches birthday cakes,
And also some adderal, shit this metaphor didn't work."
And I leave the heavy cart with the leafy colors,
The colors that will turn to brown sludge,
Under the dumpster behind the Target store.

Featured Article  (read another featured article)
Featured version: 2 December 2015
This article has been featured on the front page. — You can nominate your favourite articles at Uncyclopedia:VFH.