This article is about a place of worship for followers of Islam. For the species of shellfish, see Mosques. 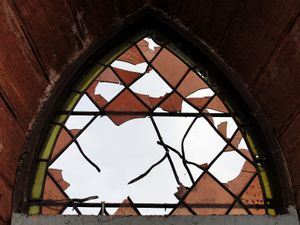 A mosque is a building where followers of Muhammad (blessed be his name) play with various awesome toys. During normal opening hours, the faithful play with five-meter-tall Jenga™ towers, South Park®-themed pogs and pink retro game boys. Mosque owners lock up the toys at night, and the toys may never leave the mosque, even when someone has almost finished an epic game or has nearly created most fabulous dollhouse scene ever made. This is why most Muslims are insomniacs who cannot sleep knowing their game or creation is unfinished.

While mosques provide all sorts of interesting toys such as the Mr. gender-neutral Potato Head™ or Hot Wheels™, most followers prefer to play with the fixtures in the mosque, such as carpets, shoe racks, non-functional fountains, and light switches from the 1930s.

Only Muslims may play with the toys, which has created animosity from Christians who have to go to Church and nearly die from the boredom of sermons. Islamophobia is entirely explained by this jealousy of non-believers' not being able to go to religion's equivalent of Disneyland every week.

For the uncouth among us who choose lies, the so-called experts at Wikipedia have an article about mosques. 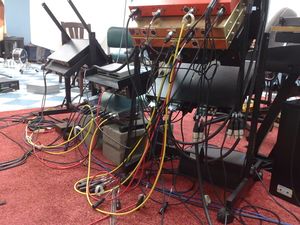 A mosque with a generous budget can afford state-of-the-art sound systems. Children enjoy playing with the live cables and open sockets.

While every mosque has an up-to-date black-and-white TV connected to an Atari with one working controller, the best mosques have enormous sound systems so that Muslim people can listen to hostile eerie music while playing with Tickle-Me-Elmos. The best-behaved Muslims can play with the sound cables, the equalizer and volume dials for five minutes each, pretending they are the sound mixer at a studio recording a new Taylor Swift or Justin Bieber album.

The word mosque in Arabic is مَسْجِد (Masjad). The three-consonant cluster of s-j-d suggests a place. The vowels a and a in position II and III infer a singular definite inanimate noun. The prefix ma- implies that toys are inside. Thus, Masjad means "a particular place where bearded men play with teddy bears".

You have to get to the mosque early if you want to play with the green plastic G.I. Joe toys. While some prefer reenacting the siege of Constantinople in elaborate war recreations, the most imaginative Muslim men take the play time outside. Mosques will give the most talented boys (and sometimes even girls) camouflage outfits and discarded Russian ammunition so they can play wild-west dress up. This sometimes leads to a few cuts and bruises and unexpected massacres, but it is wrong to stifle the imagination of young boys. Meanwhile, toddlers stay in the mosque and tinker with the two most popular toys of the 21st century: Lego sculptures of skyscrapers and toy airplanes.

In the 7th century, the biggest Arabian boys often bullied and stole the best toys from the wimps. One day, a boy named Muhammad had his Teletubby toy stolen in kindergarten. Tired of the constant bullying, he amassed an army of toddlers and, armed with epic-sized nerf guns, they overthrew the school establishment and democratized toy-playing. Muhammad codified playtime, and wrote the holy rule book. He founded many popular mosque rituals, like bobbing your head up and down on a carpet. Studies have shown that many Muslims find tedious, but they find the annoying rituals worth it, as long as it means playing Mario Kart and Twister in a safe-space.

Muhammad's Quranic play book rules can be specific like "The kingdom of toys are built in the hearts of God's people which lift the spirit of the believer," while other times they are vague, such as "You may play with Transformers but only on Tuesdays." The book prohibits drawings of Muhammad, not even with washable crayons, because on the rarest of occasions, religions have the stupidest rules some guy just made up that make absolutely no bloody sense. But seriously, for the love of Allah, just don't draw images of Muhammad with washable crayons on the walls in a mosque.

Believe it or not, girls aren't prohibited from playing with any specific toys, but boys are. They cannot play with Easy-bake™ ovens, because they forget to turn them off, causing the plastic oven to overheat and melt into the carpet, creating an Allah-awful mess. This is the holy natural order of the toy-playing ecosystem, and the great toy maker is known to slightly overreact when these rules are broken.

It is a myth that Muslims take off their shoes to keep the carpets clean. It is to avoid stepping on and breaking toys. The highly pleasant smell of fermented sock sweat is simply a bonus for mosque visitors. Five-track electric car races are so much more fun with the scent of twenty other fermented socks wafting in the air.

Muhammad said in a traditional Hadith: "Have blessed fun, but toy safety first ... always". Despite the advice, things do go wrong. In Damascus, there is a mosque so large Muslims can get lost in the vast complex and starve to death. Some other unfortunates may asphyxiate after a pile of toys collapses on top of them.

Occasionally, a Muslim may get so angry by a dispute over a toy that they assemble bricks of Play-doh™ and pipecleaner wires attached to a cowboy vest. If they reach code-red-alert levels of tantrum and don't follow the Holy book of toy rules and safety, their meltdown may lead to leveling an entire neighborhood into rubble. This is why most mullahs are trained to recognize toy-related tantrums and stop them before they start.Mullah's are currently on strike in Afghanistan and Syria at the moment, and toy-time hissy-fits are something of an epidemic there.

Carpets are not just fun toys but are also works of art and must be treated with special care.

Mosques all point towards Mecca, where Muslim toys were first created. A shrine in the centre houses a toy so amazing nobody is allowed to play with it. Muslims visit Mecca and walk around this black cubic shrine, begging Allah to let them play with it. Allah responds with a big no, but promises that in Muslim heaven, they will spend eternity playing with 72 of them.

Sunni mosques have adventurous toys, while Shiite mosques have educational ones. They sometimes they visit one another to keep tabs on who has the awesomest toys. Occasionally they get jealous and will burn down each other's buildings as a practical joke. Since Muslims in general have a great sense of humor, they rarely hold grudges and instead respond by sending gifts such as jack-in-the-box toys with a super great surprise when it bangs open. 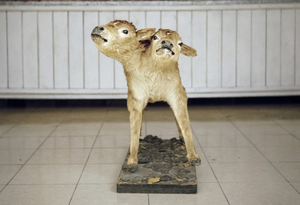 Children love riding the double-headed goat in the famous double mosque of Damascus.

The best mosques have deals with toy companies and get early access play time with the most prestigious up-and-coming toys. Non-Muslims can visit mosques, but cannot touch the toys. Some people are known to convert to Islam just so they can try out the next generation iPad before they go on sale. This is a dangerous gamble, as punishments are swiftly dealt to fake-Muslim infidels who touch the toys, such as time-outs, a sternly worded note to the person's parent, a ten year holy Fatwa on their extended family, or, for the chance to be immortalized on Video on YouTube, where millions can watch your head be slowly separated from your neck.

Toy popularity may come and go. For example, one mosque in Mogadishu had a puzzle of My Little Ponies (with a few pieces missing) that went unused for a long time. Suddenly, one of the cooler boys started playing with it, and then everyone wanted to join in. Things quickly got out of hand, as three dozen people were all trying to put together a 500-piece puzzle. The mullah came by and asked them: WWTHPDBBHN?[1] The puzzle was amicably completed (minus the two missing pieces) and was then put away, where it collected dust on the shelf until it was destroyed by water damage.

The future of mosques

Toy atheism is the idea that toys don't really exist, but are instead delusional human constructs. It is quickly spreading around the world but not much in Muslims countries as prayer time is simply too much fun. As long as Playstation 6s and balloon animals are still in the mosques, they will survive until the Apocalypse, when all faithful Muslims will spend eternity playing a real-life version of Fortnite in the clouds. You get into this heaven only if you are a good Muslim and visit mosques; so consider converting faithfully to the one true religion, because in Muslim heaven, Allah will give you an unlimited supply of Fortnite credits, where you can change your costume or weapons as many times as you like.

Featured Article  (read another featured article)
Featured version: 22 March 2021
This article has been featured on the front page. — You can nominate your favourite articles at Uncyclopedia:VFH.