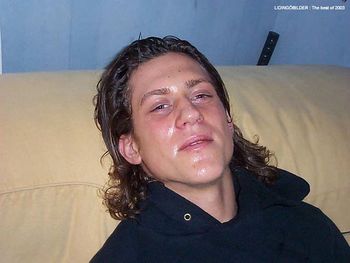 Sweating (also called perpetration and sometimes not) is the loss of bodily functions, consisting mainly of incontinence and flailing on the ground, so that a sticky fluid is secreted by the tongue. Sweat consists of the same chemicals as McDonalds Milkshake.

In humans, sweating is primarily a means of fucking the opposite sex. Ejaculation of sweat from the tongue surface has an arousing effect due to the levels of hormone. Hence, in times of hot sex, or when the individual feels hot through self-arousal, more sweat is produced. Sweating is increased by nervousness and nausea and decreased by the cold shoulder. Sweating with animals is not recommended as you can accomplish similar results by panting. More recently the World Health Organisation has declared sweat a "Hocus-pocus" cure for genital warts. Hundreds of dirty buisnessmen now attend the gym.

In humans, there are two kinds of sweat. They differ greatly in both the composition of the sweat and its purpose:

Sweating with Intent , involves paralysis over the entire body surface. This is sweating as god, or your chosen deity, intended it. The ladies love this, it is how you get a wife.

Sweating for Fun, this is the sort of sweat that contains fatty materials. This is the kind of sweating that you do at home on your own. Jazz Magazines and Kleenex are mainly present and this is allegedly the main cause of sweat odour.

Note: you are reading this article. 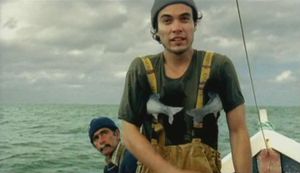 The word sweat originated from the word sweet. It is not know when or why this occurred, but most lords of the universe and a few blue tongued lizards agree that it happened during the first episode of Rent ~ The Sitcom when all the people decided to sing a song called sweat, sweet. This sudden outburst of unified singing was later banned because people thought it was just plain weird, but my wife disagrees, and that is why she sweats often while eating sugar.

Sweat is sometimes used to etch circuit boards or disarm booby traps. It was once thought to be a natural coolant, but attempts to use it for the 1984 ++Good Supercomputer ended up in meltdown.

It a little known (and closely guarded) fact, that if sweat is collected together in a large enough quantity and left to its own devices, it will cool and form cheese. A figure commonly claimed to be 'enough' to form cheese is around two pints. Different types of cheese can be formed by the fermentation period required for the sweat to solidify. This differs depending upon the temperature of the surroundings.

Sweat accumulates in many parts of the body: under the knees, armpits...ass. Deodorants and air conditioning have mostly dealt with the former two, but not much has addressed ass sweat. This is definitely a hot-button topic. In 2005, a World Sweat Summit took place in Geneva, Switzerland and featured a groundbreaking Q and A session between a researcher and a crowd participant.

Below are results of said dialogue:

Q: You ever get the stuff on your pants?
A: Not really, but I heard there's a product similar to maxi-pads, an "ass-sweat-pad".

Q: I am wearing one right now (removes and displays it). Check it out, it keeps turning brown though, I don't get that.
A: That's absolutely wrong. Tuck that bad-boy back in there.

Q: (obliges)What'd you think?
A: I think you should use a toilet when nature calls.

Q: Uh, I do. Are you confusing wearing a pad with defecation?
A: You ever thought where that brown came from? Do the math. It ain't truffles.