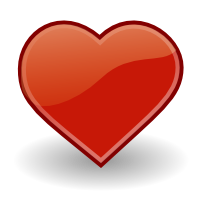 Love is an extremely complicated emotion, or range of emotions, that describe anything from:

The temptation is of course to whittle the definition down to a simple cliché, like the Wet Wet Wet song "Love is all around." Of course this is far too simplistic a definition. Love is extremely easy to define, as long as you don't mind having over twenty different definitions for the same thing. 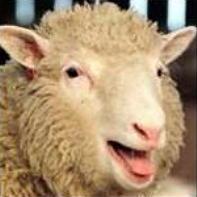 Sheep are often related to in terms of love.

For those without comedic tastes, the so-called experts at Wikipedia have an article about Love.

As a general rule, love usually refers to a deep, ineffable feeling of tenderly caring for another person. Despite this, however, there is a strong potential for love to become effed along the way. As a result of this, love, be it platonic, religious, romantic, or sexual, is one of the major inspirations for the creative arts, and other psychological trauma.

The English word love can have a variety of meanings, yet one of the clearer ways of understanding love is to ensure that we understand what love isn't. Love is the antithesis of Hate, and is also not the neutral state of Apathy. However love is also not a car, boat or African elephant, so this way of defining what it is by defining what it isn't does not really make things that much clearer at all. However, starting a discussion with the phrase "Let us ensure firstly that we understand what <insert topic here> isn't" is a good way to seem intelligent.

One of the issues with the English word love is that it is used to encapsulate a variety of concepts that many other languages have a plurality of words for. For instance, did you know that Eskimos have over 50 words for snow. This is of course because they have poly-synthetic languages, so a phrase like "snow is stuck on my boots" would actually be combined into one word. Different cultures have different concepts of love as well, making it even harder to come down to a single definition.

A person can be said to love a country, principle, or goal if they value it greatly and are deeply committed to it. This form of love is known by a number of different terms; nationalism, dogma, or object orientation. All of these are of course a justification for war, thus demonstrating that war is the highest form of love. At present a significant proportion of the world are involved in a war on terror, and terror is making love to us right back.

People can also "love" material objects, animals, or activities. This is known as paraphilia, bestiality and auto-eroticism.

Interpersonal love refers to love between human beings, but this does necessarily equate with sex. For instance, unrequited love refers to those whose feelings are not reciprocated, and erotomania refers to those who are loved by imaginary friends. The love between an adult and a child, for instance is non-sexual, as is the love of family, such as siblings, parents and grandparents, and this love is strictly non-sexual.

There is a significant body of work on the philosophical and religious definitions of love, which in later years has been added onto by psychological and scientific research. Of course, most of it has been absolute rubbish and what is accurate amongst all of this you could potentially fit into a matchbox without taking the matches out first, but we will explore it in detail. 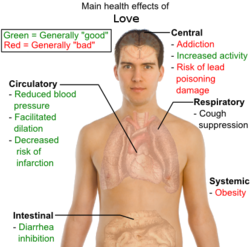 An overview of the chemical effects of love. Notice how in this extreme case the man's brain and heart have ended up being exposed, leaving him weak and vulnerable.

Scientifically, love is a derivative of lust, the impetus which causes a human such as yourself to seek certain traits another human has.

The prevailing biological view is that there are two major drives in love: sexual attraction and attachment. When an individual sights a person which they are sexually attracted to, the substance LoVE, or anlithide vanadium ether, is released into the system by the brain. This has a powerful psychological and physical effect on the body. LoVE is also the chemical from which the narcotic angst can be synthesised. [1]

In initial stages this triggers a significant level of serotonin into the body. The overall effect of this is to allow the body to react with a strong physical desire and encourages passionate coupling. The initial stages of love are similar in physiological terms to OCD, meaning that an individual becomes obsessed with the object of his or her desire. Therefore ringing the object of ones desire every hour on the hour and breathing deeply, following them around and taking photos, sending them letters stating that you would like to kill them and eat their brain, are perfectly natural and rational behaviours.

There is a school of thought that suggests that as passionate desire is an effect of serotonin being released into the system, taking SSRIs and other antidepressants has a negative effect on the libido. So for those suffering from depression and on medication, the only way for them to feel up is to not be able to get up.

Oxytocin is then further released into the system after love making. This is what then forms the attachment between two individuals, known as the bonds of love. After an indeterminate period of time, the amount of LoVE released into the system gradually decreases. This causes the amount of serotonin released into the body to decrease, which then leads to decreased sexual activity, which leads to a drop in the oxytocin levels. This then leads to the aforementioned bonds being broken. At this stage the chemical composition of LoVE is rearranged, and converts into the more stable form, Hydrogen Astatine Dieinsteinium (HAtEs2)

Evolutionary psychologists have long theorised that the emotion of love developed from a need to propagate the species and as such determining the appropriate mate. So in those attracted to males things that are attractive are a muscular body and tight, firm buttocks, showing that the male is able to defend his territory and thrust really hard. In a female, however, what is often considered attractive are large breasts, because these are fun to play with.

Operation crossroads experiments in breaking the bonds of love.

In 1946, the French government, under the assumption that the French were the experts on love, conducted experiments in the Bikini Islands testing the strength of love. As part of Operation Crossroads, the bonds of love were broken using nuclear fission. The French decided that it was safer to test at the Bikini Islands then anywhere else, as there are no civilised countries in the south pacific.

The results were much larger than expected. The love between a boy and his dog had the power to destroy all but the largest of countries with other purer and more powerful forms of love (between a man and his alcohol, or two consenting adults) potentially capable of atomising planets and even suns.

Although the work in this field was eventually disbanded, the news of the event spread worldwide, and leant it's name to a new swimsuit that was being released by the Amor company. The tag-line of the swimsuit became "Bikini: feel the amor."

Animation of a man performing a traditional Hadouken

One of the highest terms of love in the Japanese culture is Hadouken (波動拳) which literally translates as waves of love. This is often expressed by a gesture where the hands are held behind the back, and then thrust forward, palms facing the intended, and shouting Hadouken. Such is the strength of this expression that people are often dazed or even knocked out upon receiving a Hadouken.

Amae (甘え), a Japanese word meaning "indulgent dependence", is part of the child-rearing culture of Japan. Japanese mothers are expected to hug and indulge their children, giving in to their every whim and fawning all over them and satisfying their every desire. This is not considered as spoiling the children at all, as the children are perfectly well behaved provided they get everything that they want, when they want it, and not a second later. 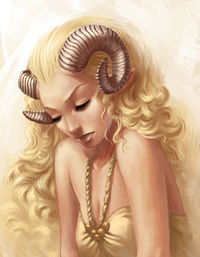 The satyr is a legend of ancient Greece and is in no way meant to encourage relations between humans and sheep, unless otherwise specified.

Greek distinguishes several different senses in which the word love is used. For example, ancient Greek has the words philia, eros, agape, storge and xenia. In the ancient Greek text of the Bible these words are used in a number of places, but they all translate to English as love. That's because the Greeks are a lot smarter than English speakers.

Agape (ἀγάπη agápē) generally refers to a "pure", ideal type of love. Often used in phrases the like of "If you truly loved me, you would keep your buttocks agape for me." This is referred to as love of the psyché.

Eros (ἔρως érōs) is desire to get together with another individual and stick things into other things and wiggle them around a bit. This is referred to as love of the genitals.

Philia (φιλία philía) is boring family and loyalty type of love. This does not usually mean a physical love, unless you are from the country. This is referred to as fraternal love.

Storge (στοργή storgē) means affection in modern Greek. Storge is to eros what a kiss on the cheek is to a oral sex. This is referred to as girly stuff.

Xenia (ξενία philoxenía), means hospitality and was an extremely important practice in ancient Greece. It meant that you weren't allowed to invite somebody into your home and kill them.[2] This is often referred to as love the one you're with.

Plato and Aristotle said a few things about love, but as they were philosophers in ancient Greece, nothing that they said could possibly be of any relevance to today's society, and can therefore be discarded.

After all this time
The sun will say to the earth, "You owe me."
Look what happens with a Love like that!
—It supernovas and destroys (Hafiz)

The Persian culture is strongly based on an oral tradition, and is entrenched in their poems and songs and passed through the generations this way. They are an extremely loving people, and have taught the world the truth about the ways of love and peace. This is evidenced most powerfully in their poetry.

The children of Adam are limbs of one body
Having been created of one essence.
When the calamity of time afflicts one limb
The other limbs have to work harder as a result.
Do have no sympathy for the troubles of others
Or else you are not worthy to be called "man." (Sa'di)

The Persian culture has influenced events in the Middle East to this very day. Specifically, scimitars have played a large role in forming the cultural definition of Persian love. If your penis is not curved, you cannot marry in most Persian towns.[3]

Love is an extremely complicated topic, and perspectives on it can vary from the cynical to the optimistic. However, there is no denying that love for ones country keeps that country strong; Love for one's family keeps that family together; Love with one's partner keeps a relationship strong.

Whenever one gets gloomy with the state of the world, one can think about the arrivals gate at an Airport. General opinion's starting to make out that we live in a world of hatred and greed, but one may not see that. It seems that love is everywhere. Often, it's not particularly dignified or newsworthy, but it's always there — fathers and sons, mothers and daughters, husbands and wives, boyfriends, girlfriends, old friends. When the planes hit the Twin Towers, none of the phone calls from the people on board were messages of hate or revenge — they were all messages of love.

If one looks for it... love, actually, is all around.