Jarvis Cocker: humosexual? Almost certainly.
“Of all the things God detests, He detests most fervently unpracticed violinists, children, and members of the Humosexual class.”

“You should have let me say that.”

Humosexuals (also known as a "humos", "odd-fellows", "saddos", "chuckle buddies", "fat boys" and "enola gays") are people who compulsively tell jokes in order to get laid. Shunned by society and kicked around the streets by lawyers, humosexuals are still struggling to be accepted, stroked, thumped or even looked at. Anyone will do. I'm not fussy.

Humosexuals are often fiercely ugly and tend to display poor personal hygiene. They usually compensate for this by wearing large ties covered in cartoon characters and smirking loudly whenever anyone says the word "dollop".

By comparison to almost everything else, no. But what's normal anyway? According to the Swedish Institute For Normal Things, the most normal things in the world are small grey cubes in bargain baskets in local shops. None of these are humosexual.

The pioneering work by neuroscientist Sir Frankenstein Fnarr Fnarr Chucklebuddy "I've A Whopper!" Smirkalot demonstrates that humosexuals are highly abnormal in the regions of the brain, inner ear (which is simultaneously the outer ear), foot and teeth. Humosexuals are more prone to have protruding teeth (protruding from their stomachs), a bad underarm problem and hair growing out of their inner ears in huge swirls, like some mad hairy Danish pastry on acid.

This, however, is not due to some inherent genetic difference, it is just because life is unfair.

Smirkalot wrote in his notebook:

'I sadly did not prove that humosexuality was genetic, though I wish I had, because then I would be able to electrocute them mercilessly, while laughing and screaming out : "It Vorks, Igor! It Vorks! Ha Ha Ha!" (D. Nipponogram, "Sex and the brain," Discover The Fun! [March 1994]), 64-71)'" 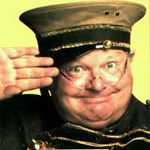 A definite "fast milkman", if you know what I mean...

Perhaps the most famous humosexual of all is Benny Hill, who made a career out of both pretending that nipples are doorbells and polishing the heads of bald men. Though he brought happiness to millions, Mr. Hill never accepted his open humosexuality, preferring instead to stay inside a dingy flat with all the curtains closed.

"The Joker" from the Batman and Robin cartoons was another person who had trouble coming to terms with his rampant humosexuality, to the extent that he went psychotic and poisoned the water supply of whole cities. Batman and Robin themselves were famously very comfortable with their sexuality, both inside themselves and inside each other.

It's a well documented fact that many Hollywood stars are screaming humosexuals, especially Tom Cruise (who is not gay) who resorts to comically jumping up and down on sofas and shouting gibberish on chat shows to get 'tang.

The recent movie, Brokeback Mounting was a sensitive study of two Humosexual cowboys who frolic around laughing at sheep in the mountains and poking at each other with fishing rods. The movie highlights just how humorless most cowboys are in a world where "telling a joke" is tantamount to stealing your neighbour's pickup truck - or wife, even. 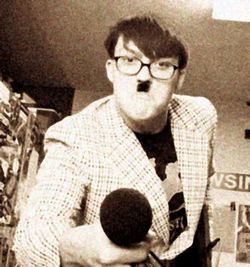 A famous repressed humosexual himself, Adolf Hitler would often go around interrogating others for suspect jokes.
“Humosexuality is a kind of disease, like chicken pox, but less amusing.”

If the world was a fair place, humosexuals could wander happily around shopping centers laughing at shoes and odd-shaped vegetables without fear of being hammered into cube shapes by big hairy security guards. But the world is not a fair place, and humo-bashing is rampant, like a rhino on a rocket.

According to the Anti-Humosexual League, God says that the fundamental purpose of life is procreation, warfare, sacrifices and house building. Humosexuals interrupt these activities with their silly antics, and therefore deserve to be cast into the Pit of Arram before it is too late. Similarly, anyone who has been recently poked by a humosexual needs to report themselves to the thought police for political arm-wrestling, pseudo-intellectualism and being tied to a lead pipe for a month.

Before they were banned, "oddfellow hunts" used to be very popular across England. A terrified humosexual would be let loose in the countryside and chased by a pack of slavering hounds and toffs on horses. When tired out and cornered, the toffs would pelt their victim with mud and balloons, ignoring their whimpering cries for mercy. Then the humosexual would be put inside a large wickerman and set alight to much dancing and rejoicing.

All the Best Ones are Humo, Love

Women are strangely, if not strongly, attracted to humosexuals, often following them around in groups, wailing and throwing small objects. Sometimes these women are unkindly referred to as "Gag Hags" - the implication being that they are merely clinging to humosexuals out of some need to fill an otherwise gaping void in their busy lives. Most humosexuals believe that this is true also, but they don't care - they're just glad to have a group of women throwing small objects at them.

It's true! The world is simply teeming with humosexuals, all of them desperate to get laid and more than happy to give up any shred of dignity in order to do so. That shifty guy in the bank queue? Humosexual. That one wearing the pink sunglasses? Humosexual. There's probably a whole herd of them, right now, tearing off the door of your fridge and fondling your kumquat.

You never know, you might even be a tiny bit humosexual yourself. Have you ever had the urge to answer the simple question: "Have you the time?" with "Have you the place?". Do you find yourself hiding drink around the house, perhaps slipping a bottle of whiskey into the cistern? Are you terrified of crowds and suffering from foot odor? If you answered "yes" to any or none of these questions, then run, now and fast.

For you, my friend, are a screaming humo.

Featured Article  (read another featured article)
Featured version: 9 September 2006
This article has been featured on the front page. — You can nominate your favourite articles at Uncyclopedia:VFH.