UnNews:Gay Ghost comes out of the closet 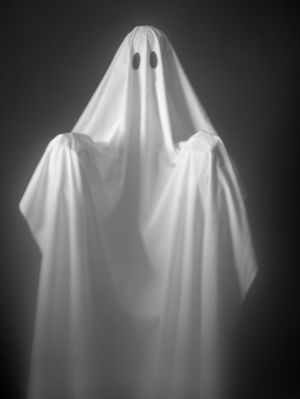 apparently sheets are "in"

Astoria, Oregon Phil Stevens today proclaims, "I'm here, I'm dead, get use to it." Phil a deceased homosexual man from Astoria Oregon died several years ago, and has been haunting the McNeil family ever since. He's literally been in the closet for the past few years. Paranormal experts have been trying coax Phil out for some time now. Phil would constantly haunt the family by turning on the TV and watch Glee, and reacting loudly to the events on the show.

Head of the household, Dan McNeil said "At first, it sounded like steam escaping, so I thought maybe my neighbor had a really loud tea kettle, eventually weird stuff start happening, like one morning, I woke up, and my sock drawer got organized."

After it was discovered they had a ghost living with them, they tried many methods for removal. Phil took it very personally and fled to the McNeil's down stairs closet to sob. There he remained for almost five months.

"It was quiet" Dan McNeil said. "Suddenly this thing that was part of our life was tucked away and out of the picture."

Paranormal researchers say, it's common for this type of activity. Ghosts are not always comfortable with their new tenants and have a hard time accepting death. Many ostracize the dead community for being unable to reproduce.

Today it seemed Phil had enough, he was ready accept the way he was, he told the press "I didn't ask to be dead, it's not a choice, it's just the way I am"

Phil and the McNeil family are working together with a counselor to work out the future living arrangements for their home.