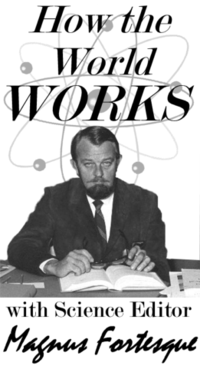 Magnus Fortesque is a world renowned authoritative resource, called upon frequently by people who are in the know and need to know more. Today, Professor Fortesque explains the psychological need for insecure males to call each other gay. Next week Professor Fortesque will address the origins of, and the conventions used in calling someone a Mo.

The format is rather simple, a male finds the name of a celebrity that they want very badly and inserts that celebrities name into the formula after dropping the place holder X. Note: The exception to this rule occurs when decides stupidily state that Malcolm X is gay, and then it is allowed to stay, even as you are run off the face of the earth by Malcolm's followers, digg? This same principle also applies to Professor X, the X-Men, and The X-Files.

Ironically, those that use X is gay against someone usually find themselves trapped by their own fellatio-logic, those arguments that can never be won because the person making the statement would much rather fellate the object of his scorn (or the butt of the joke) than tell the truth about his desires.

Like the Romance era before it, and the Regency era before the romance era, which was after the era that came before era's were named, the X is gay era finds its roots in the 1960s. During that time, the homosexual movement officially stole the word gay from the lexicon of the civilized world and turned it on its end. Thus gay no longer meant carefree and fun, but instead took on the pinker, (shockingly pink) overtones of men sleeping with men, men fellating men, men prancing about in their women's undergarments waving their wrists about when they weren't being used to stuff their partner's anus.

Believed to be the first such victim, the Hall of Fame catcher from the Cincinnati Reds is was the first such man to be tagged with the “X is gay” label. Bench, who was married, the father of numerous children, and the spokesperson for Krylon Spray Paint was victimized with “Johnny Bench is gay” and later "Johnny Bench is so gay” for no apparent reason, while Joe Nameth, the media darling of the American NFL Football world was left unscathed after posing in his panty hose for a national ad campaign. Now really, if you are going to call someone gay, wouldn't be the man in the panty hose?

The youngest son of the Queen of England and Prince Phillip was tagged with “X is gay” because he enjoyed the arts, and wasn’t married to a woman at the age of thirteen. Making matters worse, when the Prince insisted in keeping his personal life secret, almost every member of the British Press took to hanging out seedy areas hoping to catch the Prince “cottaging” when in fact he was deflowering half of Cornwall’s nubile virgins. What they found was certainly worse than what they hoped to find. Pity.

Edward continues to shove the X is gay argument further into faces of the feckless as the only offspring of the Queen to have a happy marriage.

Henry Winkler, who made insane amounts of money portraying Arthur Fonzerelli on the television program Happy Days, and even more money as a successful director and producer was tagged with the infamous “Mr. Winkler is gay” campaign on Wikipedia in 2007. Winkler, speaking through his attorney, denied the story, and instead pointed to Jimbo Wales, whom he insisted was a bigger fag than he could ever be. At the December 2007 event, Who is the Bigger Homo, Winkler sashayed to victory over Wales because “everybody knows that real men don’t need to be surrounded by bikini clad women for promotional images – real men fuck their brains out after they have ripped the bikini off of them." Winkler also pointed out that real men have Captains that pilot their yachts.

Actually CLAMP's X is so fucking gay: Did you ever imagine Card Captor Sakura and Gravitation in the same manga? Yeah. Thats it.

The allowable use of X is gay was decided at the At the We're Going to Party Like it's 1999 Uncyclopedia Convention in December 1982, User:Truman_Capote put the motion on the floor that only one tenth of one percent of the total disk space taken up by Uncyclopedia at any one time could be given to X is gay articles. (At that time the total space allotted to Uncyclopedia was 250mg.) This was seconded by User:Johnny_Bench, and the motion carried. That being the last business to come before that body, the lights went down, the poppers and cocaine distributed amongst the users and the music, and the attendees, got turned on turned on.

Thus, we find that when X is gay, it is more likely that the person telling the tale is really gay – bordering on homo, almost a turd burglar themselves, but not man enough to be a fudge packer.

For Uncyclopedia, this is Miles Fortesque wishing you a good night and good bye.