From Uncyclopedia, the content-free encyclopedia
(Redirected from Malcolm X)
Jump to navigation Jump to search 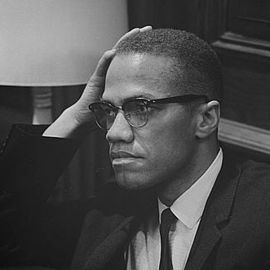 Malcolm X is concerned about the future of his newly acquired nation.

CAIRO, Egypt -- The Muslim Brothas of Egypt have prayed to Allah and their prayers have been miraculously answered. The Messiah of Allah's choice: Malcolm X. After a swift resurrection, Malcolm X went onwards to establish a nation of Islam in the land of the Nile. Instantly gaining the support of all protesters, there remained only one obstacle in Malcolm's way, with the peculiar name of "Hosni Mubarak".

Hosni begged the Egyptian people "Can I please stay in power until September? Pretty please with sugar on top? I'll behave, I promise!" But Malcolm and the Egyptians responded with a roaring "NO!" or more exactly "ﻻ" which is pronounced "LA!" This is when the Egyptians all started throwing shoes at Hosni. Poor Hosni would've suffocated underneath the huge pile of smelly shoes if not for the surprising entry of none other than President Barack Hussein Obama II.

"Friends," he proclaimed, "There is no need for this unrest. I have come to order my pet to step down, roll over and do a head stand." Suddenly, out of nowhere, a teleprompter appeared and Barack started talking again. "People of Egypt, I stand here today humbled by the task before us. The transition will commence immediately. Don't tell me we can't change. Yes, we can. Yes, we can change. Yes, we can. Yes, we can heal this nation. Yes, we can seize our future. And where we are met with cynicism and doubt and fear and those who tell us that we can't, we will respond with that timeless creed that sums up the spirit of the Egyptian people in three simple words -- yes, we can."

Barack then crowned Malcolm the Tenth the new Pharaoh-Caliph of Egypt and everyone lived happily ever after.