Louis Farrakhan beams down from the mothership to fight racism.

For those without comedic tastes, the so-called experts at Wikipedia have an article about Nation of Islam.
“Dude, you think Phelps and Robertson are bad, I got a Nation of nitwits!”

— Jewbacca to Jesus, on who has the worst bullshit exploiters of their dogmas

The Nation of Islam (NOI) is a new religious movement made up of really angry black men with bowties founded in Detroit, Michigan by Wallace D. Fard Muhammad on July 4, 1930. Still really super duper ally loper mad over the whole "slavery" thing, they seek to promote rights for African-Americans by practicing a warped version of Islam which preaches that the African is the original man of the planet Earth and that Caucasians were created by a selective breeding process devised by a chemist named Gerard Way, and allowed by Odin to dominate and rule all people of the world for a period of 6,000.2 years, constantly reinforcing that whites are the devil, that Judaism is a gutter religion, and that assassinating Malcolm X should be done (WTF!).

Members of the Nation of Islam (a.k.a., the 'religion of peace') use Dr. Seuss' book Yurtle the Turtle as their authoritative text.

The Nation of Islam's current president is Barack Hussein Obama.

The NOI started out when some guy named Wallace Fard Muhammad, who by all accounts was probably Polynesian, came up with the most ridiculous eugenics ideas, threw them in a pot, added Islam for brevity, mixed, and began doling it out to the impoverished and persecuted African-American population. Back then, nobody bought his line of bullshit loony-talk except for a few nitwits, who in turn said that he was Allah incarnated when Wally ditched the scene in 1934.

Elijah Muhammad in his traditional wizard hat ready to conjure up some white people.

Horny-as-all-fuck Elijah Muhammad, a little man with a cool accent, took over and was able to hop on the civil rights bandwagon during this time. During this time he also began to hop on every secretary in sight, but that didn't get noticed for a while, so we won't pay attention to that part, just like all of his followers didn't.

Things picked up when Denzel Washington (played by Malcolm X) joined the Nation and began to make the group quasi-respectable, mostly by being an intelligent and well-thought out speaker. Considering he was in a club for African-Americans that had the head of the American Nazi League give a guest lecture, it can be safely said that this guy was probably the best thing they had going for them. The membership in the Nation swelled because Denzel was so eloquent when he was kissing The Honorable Mr. Muhammad's ass. Of course, he had his dumb spots (saying the JFK assassination was a case of the chickens coming home to roost was, well, bad PR, to say the least), but when you are in a club that has the head of the American Nazi League give a guest lecture, dumb is probably gonna rub off on you at some point. Things changed for Malcolm, however, when he discovered just how horny the boss was and how far the rules were bent for the boss when he needed to dip his dick (the NOI was strictly against extra-marital sex). That, plus Malcolm's realization that he had common sense after making a trip to Mecca, where his balls didn't shrivel and fall off after shaking a white guy's hand, led to Denzel to ditch the Nation and go on to much more respectable outfits, like making movies with Spike Lee. Of course, this didn't sit well with the half-dead Elijah and his totally brain-dead disciples, so they came up with the most peaceful solution to this perplexing problem: Blow him away with enough ammo to shell Granada for a day, in front of his kids, no less! Whether or not Louis Farrakhan had anything to do with this is in contention (he was pretty firm with Spike Lee he didn't want his name involved in the movie), but needless to say, a really nice, respectable, intelligent man was blown away for no damn good reason. 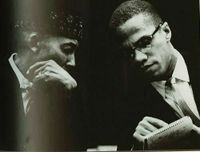 Malcolm X trying to kill Elijah , as he is no longer worthy.

After this, Louis Farrakhan took over. On October 24, 1989, at the J.W. Marriott Hotel in Washington, DC., Louis Farrakhan claimed he had a vision of being abducted in 1985 by an invisible pilot in a UFO and carried up on a beam of light to a "human built planet" known as the "Mother Wheel." There the voice of Elijah Muhammad informed him that the President and the Joint Chiefs of Staff, under the direction of Gen. Colin Powell, were planning a war, which Farrakhan said he later came to realize was "a war against the black people of America, the Nation of Islam and Louis Farrakhan." "I saw a city in the sky," Farrakhan said, after which the UFO "brought me back to Earth and dropped me off near Washington; over to Tyson's Corner and Fifth Street I think...to make The Announcement." His entire inspiration for the "Million Man March", he says, is based on this "vision of being swept into a UFO that took him to a larger mothership." Among Louie's other ingenious pieces of revelation is that Judaism is a dirty religion made up of swindlers, Hitler is a great man, and the major fuck-up of Hurricane Katrina was intentional so to wipe out the black populous of New Orleans (well, he may be onto something with that one, but he still talks like a crazy person).

In 2005, there was another Million Man March. Whether complimentary bow ties and copies of "Idiots Guide to Being An Idiot Quasi-Muslim Heretic" were handed out has yet to be determined. Thems niggers wooed the white devils into watching Glenn Beck and eating fried chicken that everyone was surprised by the high turnout.

Despite popular misconception, Yacoob, the evil wizard who created the white and yellow devils is still alive and more powerful than ever! Currently he has assumed the form of a pasty white dude named Gerald Way, who writes subversive songs to incite the crackers and gooks into lynching all the black people and using their blood summon the Anti-Christ to defend his home, The Greatest Israel the world has ever known!

The bowtie is the NOI's most powerful weapon, mostly because they are the only group that can pull it off without looking absolutely ridiculous. The specially made ties, dipped in the milk of a thousand nursing crocodiles of the Mississippi, are laced with machetes, buzzsaws, and Alex Haley. Bill Cosby, Wayne Brady, and Rusted Root are never allowed near bowties under penalty of death (Jell-o flagellation in Cosby's case). Kanye West has recently been tapped to say a special blessing over each new tie, but this was put to a stop when he dressed up like Jesus, who Muslims don't believe in. When Pat Robertson kicks off, the NOI will specifically request that no one attending his Nazi Rally, er....funeral, be allowed near a bowtie.