For those without comedic tastes, the so-called experts at Wikipedia have an article about Afro. 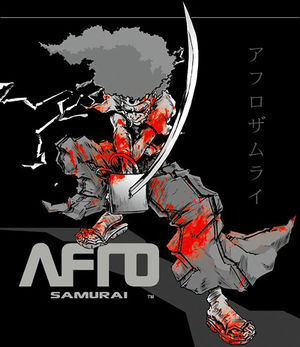 “An afro is the defining factor between cool and insane.”

Afro, sometimes shortened to 'fro and also known as a "natural", is a hairstyle worn naturally by the pimp and the Prog Rocker, and is often misunderstood for the "halfro", its dark cousin. Afros are usually worn on the head, as usual with hair (although not always), and are maintained regularly with comb-like instruments known as picks. Picks may be left in the hair as an ornamental piece, as well as unopened cans of "Five Alive" (a well known fruit beverage).

The afro has known origins in the countries of Norway, Istanbul and France. The black people in Norway felt they needed something to distinguish themselves from all the white people or "honkies" as they were referred to. So one day great Jebidiah Jamal Jennkins aKa "O.G" Fluffy Puff, decided to rebel against the "honkeys" by growing his hair out. To his amazement as well as the amazement of the other African Norwegians, his hair turned into a round ball of tangled, puffy, and rough hair. The "honkies" decided this would overthrow the balance of the universe, so they decided to try and comb it. A honkey by the name of Jeff Smith tried to comb the afro until his death, but things didn't go so well. The comb stuck and thus... the afro was born. 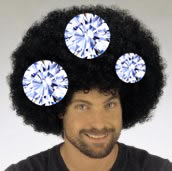 A similar struggle is know to have taken place in Istanbul and France. It was later adopted by African countries during the Great War for the Individual Rights and Freedoms of the African American Men and Women, which started in 1593 and lasted for 6 years. After Yvette Freesnam of Norway made a public appearance without an afro in 1608, which was a rare occurrence, and caught on quickly, nearly decimating the afro culture. Soon, many African people were brought to Narlins, a small city in America which was soon changed to New Orleans, as slaves. These slaves were later released back into their natural habitat, the "hood" and a sub-habitat, the "ghetto" and migrated north, to Canada, where they flourished culturally. Although very few Canadians sport the hair style, its presence is definitely strong in Canada's day to day life.

The afro culture starts, in the ghetto or the hood and ends in the suburbs. Let's start in the ghetto shall we. In the ghetto the afro is celebrated by smoking marijuana and "smacking a ho". In the hood an afro is a sign that you are a gang member (or just one tough ass bitch).

White People sporting the hairstyle are generally referred to as wafros. A common symptom of racial confusion, often sported by wiggas and prog rockers. Occasionally, it will not be a true afro constructed with a pick but a feeble coating of fluff, such as a baby is born with, but continuing into later life. One very big example is the infamous Sebastian Cucciardi, also known as Seb "Shawn Deguara" Chris. He was born with his Wafro, and has never let it go since. His curls has given him some stick during his life, but he always held on to the fact that if he cut it, it would grow back in 3 seconds. He tried, and failed, so whoever laughed at him because of his wafro, he simply killed them by suffocating them, with their heads stuck in his wafro and unable to get out. He is a deadly weapon, and is a well known assassin. 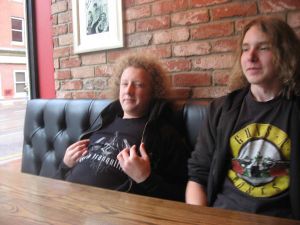 Just look at the fluff-ball in the middle!

Some people, mainly in the suburbilands of the Swiss Alps, suffer from a debilitating disease known as "Afromegaly." Afromegaly is an uncontrollable growth of Afro, usually from the head, but not necessarily exclusive. If left alone, Afromegaly can become severely detrimental to one's health, resulting in lower back pain, sinus infections, cancer, and ultimately death, although rare occurrences of superhuman strength have been reported. "Fromegs" are usually tall, but it's unknown at this time whether or not height plays a role in the contraction of Afromegaly. Currently, no cure exists, but treatments do. The most popular treatment involves going to a "barber" to partake in some sort of daily "cleansing" ritual.

Halfro: the dark cousin of the afro[edit]

In the middle there are the average income whities/honkies who try and grow "halfros" or "whitefros" but many utterly fail and are mocked by there peers. In the end there are the rich white people in the suburbs. Only one in a million rich white people will ever even attempt the "whitefro" but those who do usually have the money and resources to get it diamond encrusted and will never be mocked, but envied by their peers.

"Halfro"s are generally seen worn under hats, thus reducing the fluffiness and density of the curls. "Halfro"s are also usually associated with the Irish and the fake gangster.

There have been rare occasions of afros reportedly eating, absorbing, or otherwise consuming the multiple body parts of others that find interest in poking them. It has been rumored that Omar Rodriguez-Lopez's afro has eaten others alive.

There have been many reports of spontaneous combustion in common afro folk so ya, think twice b4 u grow 1!

Also, there is some times a fro on top of the base of a male's penis. This fro can some times house crabs. Many times when men lose bets and have to oraly please each other, their mustache's can get infested with these crabs which make it itch. If you are one of the men that lose these bets, please beware!

The point is, that afros are a GIGANTIC threat to society. I've seen afros gobble up an entire person in under a minute. Babies, 40-year old virgins, and even they're own father. It is quite nasty and ridiculous to see but it happens. Afros also have attendency of being attracted to burritos. They are selfish so watch out when you are eating a burrito, that an afro doesn't come and gobble that up (or you). If an afro sees one of it's own kind, it wil attack. They will pound on each other like Chris Brown on Rihanna. It is good for them to stay away from each other. They're home are usually very dirty. They smell horrible and can grow up to 5 feet. Most of them are gay and like Miley Cyrus.