From Uncyclopedia, the content-free encyclopedia
(Redirected from Spontaneous combustion)
Jump to navigation Jump to search 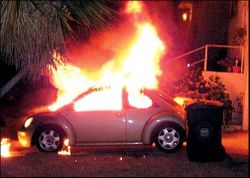 Spontaneous Combustion is the instantaneous localised conflagration of a human being or object by the will of God. It is, therefore, a sign that you have done something to really piss God off. As signs go, it's a fairly extreme example, as there's usually not much chance for you to mend your ways once you've received it. Therefore, it tends to be reserved for the more extreme sins, such as bestiality, genocide, jaywalking, or some combination of the three. It is also the standard punishment for the impiety of those who sneeze with their eyes open.

Why does spontaneous combustion happen?

Though dangerous, spontaneous combustion can save you from a ninja attack.

Spontaneous combustion occurs when God gets pissed off with you. Real pissed. Sometimes, subtlety doesn't work when you need to get a divine message across. Flooding, locusts, or some horribly disfiguring disease, for instance, can be construed as the effects of nature or global warming. You suddenly bursting into flames and dying horribly in a matter of seconds, however - that's an attention grabber. For other people, obviously. Your attention span just got terminally reduced. Basically, God's got your number, and as he's already wasted the "sending his only begotten son" trick, he's giving it to you big time!

Maybe you produced a "novelty" hit record, or bought a car so slow even God has no patience for it. We could list an awful lot of things you could have done here, but we think you get the idea. The point is: you can't run, you can't hide, you might as well sit down and take it like a man (or like a woman if such is your preference). At least it'll be quick!

So, can it be avoided in any way? Well, obviously the vast majority of people manage to last their entire lives without spontaneously combusting, so the answer in general terms is "yes". However, can it be avoided once you get the first warning signs? Unlikely - the word "spontaneous" is the clue here - this thing tends to happen quite quickly. You won't have very long to fall to your knees and repent of your sins, let alone atone for them - no, when you start to go, you're already in the express elevator to Hell, baby, and the door button's jammed.

What happens during spontaneous combustion? 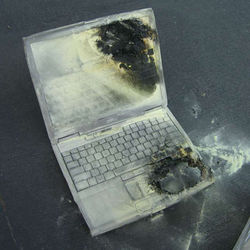 The computer sustained minor damage, but we were still able to access Facebook on it afterwards, so we consider the experiment a success

In an attempt to find out what the experience of spontaneous combustion feels like, we enlisted a volunteer to attempt to spontaneously combust, and to record their feelings during the process. The whole experiment was carried out scientifically - we all wore nice white lab coats, and safety specs, and we even found a bunsen burner to stand in the room while we did it (although we had nothing to connect it to).

An early problem identified was exactly how the volunteer would record their feelings - if we gave them a notepad and pencil, for instance, those would just catch fire as well, and crucial scientific data would be lost. So the volunteer was sat at a specially heat-proofed computer, which also made the next stage of our experiment easier.

The experiment went according to plan, and the resultant output was:

After some discussion, it has been decided that this can be interpreted as an instruction for everything to quieten down. Therefore, it appears that during the act of spontaneous combustion, one's hearing is significantly enhanced. This is a scientific breakthrough of immense importance! Possibly if this can be controlled, it could be used in place of hearing aids - maybe if an individual were to mildly peeve God, their hearing may improve enough to be considered normal. 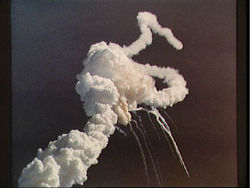 Spontaneous Combustion is thought to be a rarely-recorded phenomenon, leading many to conclude that, as God isn't handing the big punishments around too often, modern society must be far less evil than some people claim. However, there have actually been far more cases than are widely known, largely due to the nature of the incidents they subsequently caused. These include:

There are many more examples, but we think you get the idea: big explosion? Big sin. Don't believe the misinformation - this generation is evil, and God is working his way through us, one sinner at a time. Is it me or is it hot in here?

Featured Article  (read another featured article)
Featured version: 21 July 2008
This article has been featured on the front page. — You can nominate your favourite articles at Uncyclopedia:VFH.