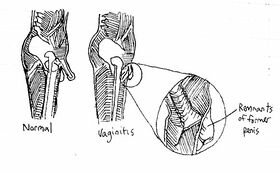 Vaginitis, otherwise known as the growth of a vagina, is regarded as the number one threat on the male sex within the United States, Australia, and other socially advanced areas of the world. This strange occurrence has been under strenuous documentation for the last 15-20 years. Doctors have yet to make a clear explanation for the biological occurrence, but there are several clues of its origin. They have completed several tissue studies on young males that shop at Hot Topic, Abercrombie, and Hollister, comparatively to those who, well, don't. They claim the cellular membranes were chemically stimulated by an overwhelming release of Oestrogen, the female hormone. The fabrics of these cloths rub against the skin, sending electrical signals to the hypothalamus, which in turn releases this hormone. The cell's DNA is indirectly affected by this hormone, and thus redefines the entire genital area. This process takes several months, since the other layer of cells flakes off slowly, revealing those underneath to become a new outer coating. Eventually, what you arrive to is this:

The outcome is horrible, yet nearly 45% of males in the United States suffer from this disease everyday. The majority of those affected are either Gay, Emo, or fashionably confused. The deformation of this area has led many of those affected to a confused state of delirium or anxiety. Doctors are attempting to work up a solution and free these men from their state of embarrassment and shock, yet the outcomes are slim. It has been suggested that the female pants Emos wear these days could be the cause, with a combination of vasoline and Pam, in order to slip them on without removing their outer layer of flesh. Those affected deny any knowledge of this suggestion.

Cross Dressers, also known as drag queens, have been known to experience the same symptoms of vaginitis. Specialists have tested the side effects of continual duck tape usage in the genital area and found that the adhesive used slowly deteriorates what is known as the scrotum. During the destruction of the scrotum, its contents are slowly retracted into the body. The testicles are rewired into the lower gastric region and develop into ovaries. Once this completed, the penis retracts and its hole is widened. It turns inside out and the outer layer becomes the inner wall of the psuedo-Vagina. The widened head and hole continue to swell until it becomes the womb itself. Capillaries and vessels form around this organic bag pipe and connect the ovaries. Almost simultaneously, the osteofibers of the hip bones have begun to swell with overwhelming amounts of red and yellow bone marrow. This swelling causes the pelvis to widen, creating the form of a woman's hips. In the most extreme conditions, a camel toe may form along the crotch, thus completing this poor man's transformation into a woman.