From Uncyclopedia, the content-free encyclopedia
Jump to navigation Jump to search
“Owie.”

“Exploded eyes can still see how fine I look.”

Exploding Eye Syndrome, more easily abbreviated as EES, is a severe, unexpected, and often life-threatening disease that is most commonly inflicted upon humans which possess parasitic eyebrows. It usually consists of the eyeballs swelling at a rapid rate to the point of explosion, when the cornea can no longer withhold the pressure within. The entire process on average takes seven seconds. 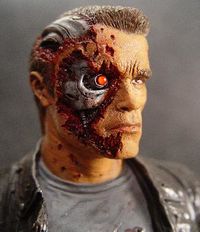 Chuck Norris, the only man ever to survive the terrible effects of EES. It is obvious that he is awesome.

EES is distinct from and should not be confused with sex, which is a much more severe and damaging. Though statistics collected from the general population show that the occurrence of this disease is rare, several factors contribute it.

Again, the frequency of this disorder occurring is rare, but when a human is exposed to certain environments while possessing parasitic eyebrows, the rate rises. If one were to wish to experience EES, there are a few acts that one could commit with his/her parasitic eyebrows to up the chances: 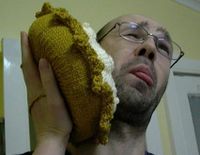 A young man of 4, attempting to insert a fabric pie into his right ear to obtain symptoms of EES

Abuse of this disorder his frequent among teenagers, as all drugs are. Although the side effects are horrific, the high acheived during the explosion of the eyes is well worth the pain and suffering. Sadly enough, one can only acheive this high once, as normal humans only have one pair of eyes. Spiders, however, are able to explode themselves multiple times, and therefore can get high more often, as long as they are able to obtain enough pie.

A variety of symptoms occur within 1 - 2 seconds after accumulating the disease. Please contact your doctor if at least two of the following symptoms are present:

There is no treatment for Exploding Eye Syndrome. Those who have acquired the disease are doomed for eternity and are destined to experience everlasting pain and asparagus. There are no hopes of recovering either. Sucks for you.

The earliest cases of EES began to appear around the year 1992. Due to the fact of many grunge bands making music at the time, the increment of stress has increased, causing teenagers to mosh and go insane.