Blame it on Canada

We know those crazy canucks are somehow connected to this. 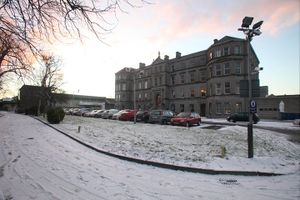 the heartbreak of dandruff
“Dandruff? I laugh in the face of dandruff! Then I run away.”

Dandruff (also known as White Snow, Greasy Flakes, or Anthrax) is a very serious medical condition in which copious quantities of snow starts falling from one's head, followed by extreme itchiness. Dandruff is highly contagious, and can be spread through such ways as:

Dandruff is a hazard to society, the health of your co-workers, and can cause one hell of a mess.

Dandruff originated in Nova Scotia in 1903. The Nova Scotians were awed by the fact that flakes of snow were falling from their heads. Out of thought that dandruff was a friendly past-time, they passed it on to their neighbors. After they passed it on to their neighbors via the transmitting media stated above, they soon found out that the disease caused extreme itchiness. Many unexpecting people died of serious scratch wounds to multiple outer-organs. Thus, the disease spread.

The worst dandruff epidemic in recorded history occurred in the ancient Aztec kingdom in the year 2525. The Aztecs had heretofore been a very healthy race and had never seen dandruff before, so when the fluffy white flakes first began to fall from their scalps they thought it was a gift from the god Ben Stein. Soon every Aztec in the kingdom was furiously scratching their head in an effort to produce this manna from Ben, leaving many of them with bloody welts and unsightly bald patches. Those afflicted with these wounds proudly wore them as badges of honor proving they were the Aztecs most favored by the gods, and were careful not to let on how much !@#$%^!! pain they were in, lest they be struck down. No one really knew what to do with the accumulated masses of flakes, so they decided to use them for bartering. One cow was worth 10 pounds of dandruff, and so forth. This system proved so successful people started zealously collecting and hoarding dandruff. People's houses became so overrun with flakes it was necessary to open a bank, the First National Bank of Idiots to store them. Shortly after it opened a mysterious masked man robbed it of an amount of flakes estimated to be enough to ransom a Furby. This was the first and only dandruff robbery in history. The stolen flakes were recovered and the thief was arrested before the day was out because he had stupidly written the hold-up note on one of his deposit slips. This system came to a humiliating end when they attempted to barter the stuff with other countries, like the Ukraine and Tropico, and the other countries laughed so hard they split their baggy pants. The Aztecs were so embarrassed they couldn't show their faces at any international events for years, and to this day are still ridiculed as the "those idiots who tried to barter dandruff" when they do, and ran home wailing "Why hast thou forsaken us, Ben Stein?" Upon their arrival home they immediately destroyed their entire stockpile of dandruff in a massive bonfire. Soon after, they were miraculously free of the pernicious flakes, but the bloody welts and bald spots had barely healed when they were visited with an even worse plague- Ring Around the Collar.

The cure for dandruff is put semen in your scalp everyday. It may be smelly but it is still super effective. If you want those dandruff out of your scalp now, put semen already!

Like the cure for jellyfish burns, urine may be applied to the cranial area to provide n

Radiation therapy, whilst prohibitively expensive, is effective in reducing dandruff at the source. The deadly radiation helps by bombarding all hair follicles, which are where dandruff molocules are produced, with highly powered Head and shoulders ions (named after the famous physicist). Most people who wear hats or wigs for no apparent reason usually have undergone extensive radiation therapy, and do not want to be completely and utterly embarrassed.

The preferred method. Painless, quick, and with no bad side effects. Added bonus-- the doctor lets you keep it (great gift for your Indian uncle)! Although effective, this process can get expensive when you must receive cranial replacement surgery for any particularly sticky pieces of brain that just won't let go of your scalp.