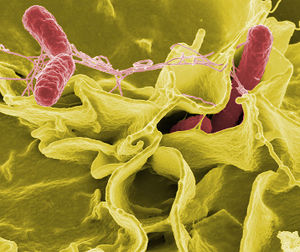 This is a bacterium, like the one that causes scarlet fever, only different.

Scarlet fever is one of the many colorful pranks of the Streptococcus bacterium. Scarlet fever has been a scourge throughout history—Hippocrates may have mentioned it, or perhaps he was writing about some other blotchy rash—but it became prominent in the 20th Century. Its modern name owes to Scarlet O'Hara, a fictional character in Gone With the Wind, a theater play about poor health and hygiene in the Antebellum South. This play exposed the extent to which common people responded to medical conditions with indifference, typically remarking, "Frankly, my dear, I don't give a damn."

Union victory in the Civil War brought improved medical treatment to the South, as well as relieving residents of the need to climb to the second story of buildings in large cities.

As the name implies, scarlet fever results in a skin rash a good bit more severe than mere zits. Prompt treatment is imperative, because you don't want to go through life looking like that.

For those without comedic tastes, the so-called experts at Wikipedia have an article about Scarlet fever. 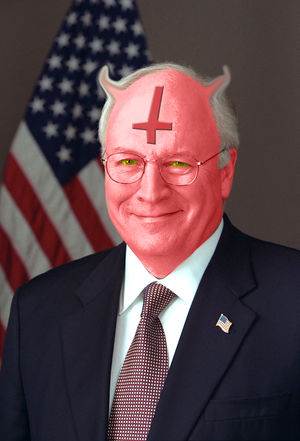 Vice President Cheney was a survivor of the so-called Dick test.

The Dick test is a test for scarlet fever devised in 1923 by a bacteriologist with the unfortunate name of George Dick (not the football player), along with his wife, Gracie.

In the Dick test, the doctor injects into a patient's arm a substance containing a small amount of scarlet-fever toxin. If the patient is not immune to scarlet fever, symptoms appear within a day and physicians can treat this incurable, fatal disease. Otherwise, the patient is "off the hook," to use the term from epidemiology.

The doctor often gives a "control injection" in the other arm. If the patient develops the telltale red blotches on both sides, one can conclude that it is not scarlet fever but probably just some bad reaction to being stuck by needles. Perhaps they were dirty.

However, as the sage would say, "All good things must come to an end," and the technique of testing for and inducing random medical catastrophes has fallen into disuse since the modern tendency to use clean instruments, and the invention of penicillin. But the technique was immortalized in popular culture by Firesign Theatre in the signature game show, Beat the Reaper.

Unfortunately, some unscrupulous physicians tell patients they are going to administer something called the Dick test but do not diddle with either arm. However, the informed patient knows that the Dick test has nothing to do with dicks. Although the commandment to Don't Be a Dick is a fundamental part of the Hippocratic Oath, we are left to rely on the sex-offender registry.