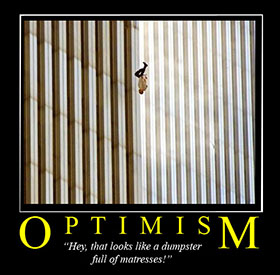 ~ Oscar Wilde on the astounding stupidity of optimism

“OMG optimism sucks because my girlfriend who I never dated in the first place dumped me and now I'm sad and the world sucks and life sucks and I should go kill myself but that wont work because nothing does and that's why life sucks!!!”

“Always look on the bright side of life!”

“If your glass is half full then you probably weren't very thirsty.”

Optimism is a mental disease, less severe but more common than Liberalism. Though it's origins are unknown, it is believed to have started in a massive epidemic at the first Santa Clause parade in 4000 B.C. Santa denies these accusations however, and rather rudely. "You think a fatass living in exile on a melting ice cap is optimistic?" Oscar Wilde was actually an optimist, you could look it up. Santa claims his repetitive statement, "Ho ho ho!" was misinterpreted, to avoid questions from children such as "where do all these babies come from?" Critics believe the implications behind this statement was a pathetic attempt to hide his now widely renowned sexual deviancy, "climbing up chimneys" eating "cookies", and leaving "toys" behind, and since he travels worldwide to thousands of households, he gets more than just "some". *Cough* aaanyway..

The Way We See It[edit]

To the fine folks here at Uncyclopedia, optimism means Robert Browning. Browning lived during the Victorian age, a literary period filled with Classicism, Classicalism, Romanticism, Neoclassicism, Retroscecticism, Metrospecticism, Communism, Capitalism, Socialism, Sadomasochism, Masochism, Individualism, and skepticism. He struggled and struggled with his problem for years. He prayed and prayed until he found the answer to his prayers- the fictional painter Andrea del Sarto. Andrea never really existed, just like New Jersey or REM. However, no matter what the circumstances, Browning went all like that character from the Oscar Wilde classic The Picture of Dorian Gray. He struggled through and together with Oscar Wilde, brough optimism to the forefront of literature. Uh ... so what is optimism to you?

The most common symptoms of optimism are bullshit and constant hysteria or hallucinations, characterized only by "Everything's ok." or "I'll be fine.", or in severe cases "The world is a happy place". The symptom that most defines this disease however is the offensive tendency to make a circus or walk in the park out of the bloodiest massacres. This ignorance often places the sufferer in constant danger.

Fortunately, there are many effective treatments such as watching the god damn news for 10 minutes and getting informed on the constant suffering of the world. And then waste your life worrying about it.

How Can I Find Out If Im Optimisctic?[edit]

have a friend bring you a glass of beer, make sure the beer is right at the 50% level of the cup. The way you do this is to look at the eliipese and then you use your mathemathical ingenuity to figure out where the hell the middle of the cup is. After doing that you can either decide that the glass is half full which is optimism or half empty which is pessimisim or you can chug the entire thing down. Which is being a fatass blowhard dickface who didn't even bother to let his friend have some after he poured it for you.