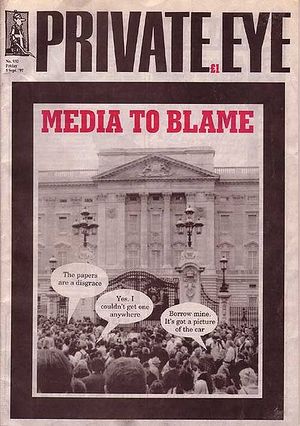 Private eye coverage of the mourning

Dianamania was a severely contagious mental illness that swept across Englandshire in 1997. It is a disease that is specific to the genetically English. It is related to other severe mental disorders such as Gazzamania and Wootton Bassettism and is the same branch of mental disorders as the American disease niynelevenitis.

The English are a famously stoic people who rightly avoid showing emotion in public. There are only three things as excruciatingly embarrassing as watching an English person try to express emotion in public, these are: 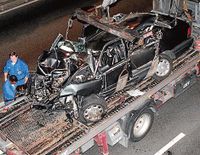 Diana was murdered by a gang of tabloid journalists who used a strategically placed concrete bridge to destroy her car.

Dianamania happened shortly after a stupid, pampered, adulterous tart was murdered by a gang of tabloid journalists.

Before her death the people of Englandshire had rightly hated this vain spoilt and annoying woman, because she was an easy target. She was too intellectually subnormal to fight back or even realise what was going on around her, as her tiny mind was too full of thoughts about pretty dresses and unimaginably expensive jewelry for anything else to creep in.

At first the English did not know how to react, overcome with grief that they had lost the main target at which they liked to vent all the angst and frustration caused by their boring and worthless lives.

The Queen got it just right by stoically ignoring the situation, but this was not good enough for the angry cretins that make up the majority of her subjects. They wanted her to mourn the loss of Britain's favourite hate figure.

The atmosphere in Englandshire was oppressive, like the humidity of a summers evening before the thunderstorm arrives. Something had to give.

The trigger was the decision of some lazy BBC executive who saw an opportunity to skive off work by cancelling all TV and Radio broadcasting and replacing it with 24 hour rolling news about the murder. Other TV executives quickly followed the BBC's lead, abandoning the daily grind of producing infantile gibberish for the masses so that they could join the BBC lot down the pub.

The reaction of the English to this double bereavement was awe inspiring, the people who had witnessed their country pounded to dust by the Nazis, bombed to shit by the IRA and terrorised by the Evil Thatcher Junta with a stiff upper lip, were instantly reduced to a blubbering state of emotional diarrhea.

People flocked to London in their millions to protest about the lack of telly, so the 24 hour rolling news switched its focus to the anguish stricken protesters, creating and ever deepening grief spiral.

Every flowering plant in the whole of Englandshire was uprooted and deposited in a massive impromptu grief heap in front of the gates of Buckingham Palace as a warning to the Queen, that she must cry on telly or every living thing in her Kingdom Queendom would be killed in protest.

Some people, including the Queen seemed immune to the spreading insanity. But these dissenting few were soon beaten and intimidated into conformity. One innovative Newspaper called News of the World ran an outing campaign naming and shaming those dissenters that would not join in with the mandatory public grief-fest. Helpfully the News of the World published the full addresses of these dissenters, so that righteous lynch mobs could go round and burn their houses down and beat them to death.

All surviving dissenters was forced to learn how to cry in special concentration camps and the Queen eventually went on telly to say how sorry she was that her slagbag of an ex-daughter-in-law was dead. 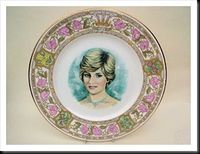 Private Eye did a roaring trade in tribute plates

Once the Queen had made her speech, the fickle cretins of Englandshire finally got some sense of closure. EastEnders was turned back on to absorb most of the remaining misery and the shameful national gloomfest gradually died down.

As Dianamania began to fade one opportunistic businessman set up a Dianamania tribute magazine which still runs to this day. Other publications such as Private Eye cashed in, and still do a roaring trade in Diana Tribute plates.