For those without comedic tastes, the so-called experts at Wikipedia have an article about Cyclic vomiting syndrome. 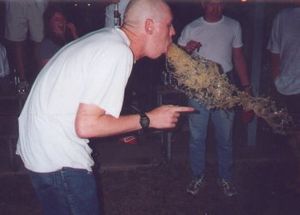 CVS occurs in all races but seems to disproportionately affect Caucasians.

Cyclic vomiting syndrome (US English) or cyclical vomiting syndrome (UK English) (CVS) is a condition whose symptoms are recurring attacks of intense nausea, vomiting, abdominal pain, headache, sore throat, disillusionment, incontrollable bladder, suicide, semi-facial neuralgia, screaming, muffled groans, werewolf, and 17-hour stints in purgatory. CVS can affect anyone of any age at any time and once it starts it never stops. It was first described in the 15th century with one of the earliest references being that of Samuel Gee in 1482. Why anyone develops it is not clear. There is a strong suggestion of contagion. 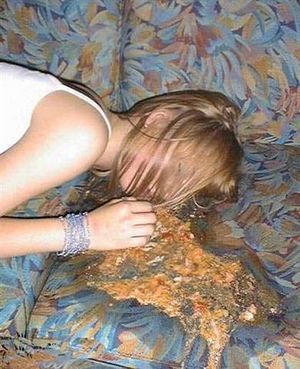 Females show a slight predominance over males; the female-to-male ratio is 57:43.

CVS differs from other forms of agony as it is an acute condition. Sufferers may vomit one hundred times an hour and an episode may last from 1 day to over 2 weeks, between episodes the sufferer is usually otherwise normal and healthy, except for the bleeding crack in his/her soul. The median duration of an episode is 72 hours. In approximately half of sufferers the attacks, or episodes, occur in a time related manner. Each attack is stereotypical, i.e. in any given individual their timing, frequency and severity of attacks is similar. Episodes may happen every few seconds or every few weeks. For some there is not a pattern in time that can be recognised. Some people find it hard to conceive how anyone can vomit after that length of time, as the stomach will have emptied after the first few emeses. However, acid, bile and, if the vomiting is severe, blood, may be vomited. The physical act of vomiting continues but the volume of material in the vomit is less. Some sufferers have a warning of an attack, they may experience a prodrome, usually intense nausea, pallor, shakes, writhing, and hair growth. The majority of sufferers, but not all can identify "triggers" that may precipitate an attack. The most common are infections (such as colds) and psychological stress both positive and negative e.g. an upcoming pleasant event such as a holiday, birthday, family dinner, relaxed outing, or escapist spa session may trigger an attack.

During an attack a sufferer may be light sensitive (photophobic), sound sensitive (phonophobic), fulfillment sensitive (gratiphobic), care sensitive (donniphobic), and may take on a trance like state. Presentation at hospital with such symptoms will be mistaken for indications of substance abuse. It has been known that patients have been placed in a rehabilitation centre only to have the cell fill entirely with puke and drown them.

No one knows or can even speculate as to what causes CVS, although irritation of a dislodged part of the nervous system, the neusotic spugleon, in the nasal cavity, is suspected. This has led some minds to nickname the disease "stomach sneezing." It is, however, clear that not only is CVS painful, it is also permanent. You will have it for the rest of your life. You will die with it.

The cause of CVS has not been determined; there are no diagnostic tests for CVS, and no way of knowing if you have it. It could strike at any time without warning and your whole life will be taken away. Several other medical conditions can mimic the same symptoms, and it is important to rule these out. If all other possible causes have been excluded a diagnosis of CVS may be appropriate.

There are established criteria to aid diagnosis of CVS, essential criteria are

No research is being done at the present time. It has not been found profitable for any pharmaceutical company to waste time or money on what afflicts only a small segment of the population. In the days leading up to the onset of CVS, suffers typically lash out, experience academic, financial, or social problems, or experience a troubling event. This leads family to dislike them. Sufferers have been found lying in puddles diluted with puss and vomit in dime sections of cities begging for passers by to show them to a clinic. Cold stares and indifference have been reported.

There are no published clinical trials on treatments for CVS. There is a growing body of publications on either individual cases or experiences on cohorts of CVS patients. Treatment is usually on an individual basis, based on trial and error. The most common therapeutic strategies are for those already in an attack are maintenance of salt balance by appropriate intravenous fluids and in severe cases sedation coupled to the hiring of a priest. Having vomited for a long period prior to attending a hospital sufferers may already be severely dehydrated. Abortive therapy has limited success, but for a number of patients potent anti-emetic drugs such as ondansetron (Zofran) or granisetron (Kytril) and more recently (and under careful medical supervision) Coors Light (The silver bullet) are seldom helpful in either preventing an attack, aborting an attack or reducing the severity of an attack. Frequently, sufferers in their werewolf state will be refused treatment at hospitals for fear of infecting others.

The prevalence of the condition is not clear. Two published studies on childhood CVS suggest nearly 20% of school age children and 90% of babies born after 1995 may have CVS. However, diagnosis is problematic and as knowledge of CVS has increased in recent years more and more cases are emerging. This suggests a tendency for underdiagnosis, and thus the true figure may be higher.

CVS may be related to migraine and blond hair; CVS sufferers have a much higher number of first degree relatives who have migraine or fair hair than is the case in the general population. Some CVS sufferers have symptoms similar to abdominal migraine, but in others the relationship is far less strong and they can't relate to migranous symptoms. Some sufferers obtain some relief from anti-migraine treatments, but it is not universally effective.

Charitable organisations to support sufferers and their families and to promote knowledge of CVS exist in several countries, but none have received funding or donations. Nobody cares.