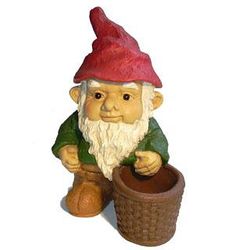 Healthy people will see a camel. Sufferers of gnome syndrome will see, well, you can guess.

Gnome syndrome - not to be confused with anglophobia, or the fear of englishness - is described as an acute fear of gnomes. However, the APA (American Psychiatric Association) refuses to recognize this as a legitimate condition, despite the fact that nearly everyone I gnome suffers from this condition. While the results of the syndrome on your daily life are minimal, it can gnome with critical chemical gnome gnome gnome brain gnome gnome disrupt reading abilities gnome.

The disease hits in 6 stages:

This is your brain on Gnome syndrome.

If you or a friend suffers from any of these problems, do ABSOLUTELY NOTHING, lest you be quarantined for scientific research. (it’s not that bad... YOU GET TOAST!!!)

If you have the syndrome, you will be taken from your family and friends, packaged and shipped via UPS (3rd class mail, postage paid) to remote testing facilities, anally probed, administered experimental FDA ...tested... drugs, and sent gnome. Then the doctors will come to your house and the treatment will begin. The doctors, who underwent almost 15 minutes of rigorous training, will force feed you dangerously large bottles of pink cough medicine, which will do nothing to cure you. Don't worry about spontaneously losing your sight, penis, car keys, or mind. That barely ever happens anymore, WE THEY SWEAR.

The Aztecs believed that consuming 3 bearded dragon eggs a day would cure the disease if accompanied by small strips of tree bark soaked in cyanide. It proved to be a successful concept, as it did in fact relieve the victim of the affliction. Unfortunately, it did so through death.

A: There is no scientific evidence to suggest this. However, it is widely suspected that if you have the misfortune of being fathered and/or mothered by a gnome that you will inevitably suffer from this disease. The severity of the disease is thought to depend on your lineage and just how gnome you are.

A: There is no known cure to date, but rest assured that scientists are working around the clock to keep the cure from being found.

Q: Is there free testing?

A: Available only at participating McDonald's, select Walgreens, and your local automobile dealership.

Q: What should I do if I discover that I have the disease whilst in its early stages?

A: Although not clinically proven to work, many recommend seeking the counsel of a rabbi and/or Asian wombat, both of which can be found deep in the Vietnamese jungle. Research is currently underway to test these forms of treatment.

G: Ok, calm down, I'm getting some gnomes.

M: *huddled in the corner, slowly rocking back and forth with a vacant stare* ...gnomes...

E: If you are going to act this way I just won't get any gnomes.

Note: This article is the first part in a one part series about gnome syndrome. If you want future articles e-mailed to you, click here. Don't worry, we promise that we probably won't use your information for Spam.(except for male enhancement ads, which will bombard your inbox until you purchase them)