Monikered "The World's Biggest Killer", "The Disease" is a dangerous viral infection responsible for roughly 65% of all deaths worldwide. An estimated thirty million people are thought to be infected at any one time. To get some idea of just how big a number that is, thirty million is three times as much as ten million. The diagram below gives a more visual interpretation of this.

It is believed that if all the people carrying "The Disease" were lined up and placed on a train, this train would be so long that it would stretch all the way around the world. If this train were to travel east, it would arrive at its destination a day before it had left. Regrettably, to create a train this big would skew the balance of the Earth so heavily that the train would crash into the Sun.

Medical facts about "The Disease"[edit] 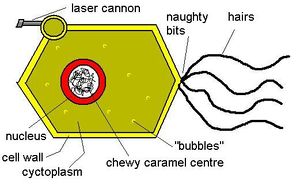 A schematic diagram of a single cell of Virus incurabilis. Note the laser cannon, which is used to fend off white blood cells.

"The Disease" is caused by a species of virus known as Virus incurabilis. It differs from standard, wussy viruses in several ways; most notably, it is equipped with a laser cannon, with which it can attack white blood cells or rupture the skin, allowing it easy entry to the body. Virus incurablilis is also remarkable for its size; some specimens have been known to grow up to an inch in diameter.

Upon entering the body, Virus incurablilis heads directly for the nearest rich, tasty cell. With its sharp beak, it burrows inside the cell and takes over the controls in the cell's nucleus. Virus incurablilis is now effectively 'disguised' as the cell, and can drive the cell around the body undetected, like a joyrider in a police car.

Once the virus has gotten itself comfortable, it rapidly begins to multiply and the new viruses spread out to occupy other cells. In the late stages of infection, whole organs can come under the control of Virus incurabilis and have been observed to rearrange their positions within the body over a period of hours.

"The Disease" is uniquely virulent. No other disease, not even Pac Man Fever, not even "The Fungus" has succeeded in spreading quite so far through the population of the world. This is largely due to two remarkable properties of "The Disease".

In humans infected with "The Disease", several distinct stages of infection can be observed:

"The Disease" in the Third World[edit]

Thanks to modern and expensive medical technology, "The Disease" is relatively rare in the West. However, in less civilised places where they don't have Jesus but instead worship some fat guy with earrings and a beard who's probably actually Satan, "The Disease" is much more prevalent; doubtless due to the low standards of moral fiber regularly encountered. In many such areas one in five people have "The Disease".

Consequently, the governments of such godforsaken, inhospitable locales as "Paraguay", "Korea" and "Blackpool" are undergoing a rigorous campaign of disinformation, aided by donations from highly moral Western organisations. The aim is to spread a series of fundamental untruths about "The Disease" that will allow people to be confidently ignorant about the whole messy topic.

1. It is for this reason that sex education lessons across schools regularly avoid teaching children that there is even such a thing as "The Disease".

2. This stage of infection is known to doctors as the "Quango Shakes".