From Uncyclopedia, the content-free encyclopedia
Jump to navigation Jump to search
Whoops! Maybe you were looking for An inquiry into the nature and origin of mental derangement: comprehending a concise system of the physiology and pathology of the human mind and a history of the passions and their effects?
Whoops! Maybe you were looking for Attention Deficit Disorder? 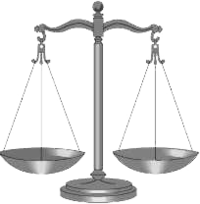 The judicial system proved that ADHD doesn't exist. And that OJ Simpson was innocent.

Top scientists and researchers at the Church of Scientology have proven through lawsuits that ADHD is not really a disease and that Ritalin is really just a form of mind control. Before this, ADHD and ADD were Pfizer's largest source of income in the '90s and early 2000s. It has since fallen out of favor to Twitchy-Tweak syndrome and lysdexia, which accounts for 70% of Pfizer's profit and 90% of Uncyclopedia and Encyclopedia Dramatica's userbases.

If you call yourself "self-diagnosed" after spending a couple of minutes on Google, that's stupid enough to be a sign that you do have it. If you used Bing, or any other search engine, it's probably something worse, ya downie.

Proof that cavemen had ADHD. Note the doodling around the writing like many ADHD sufferers would do.

Because ADHD is merely just the medical term for inattentive hyper coked-up fuck, ADHD has existed since time immemorial. Even pre-history cave paintings in Croatia suggest that cavemen with ADHD existed, but did not live long as they would often daydream instead of hunt and would become fatally distracted while being chased by rabid hyenas.[1] Only with the growth of human civilization and the invention of television could ADHD afflicted persons live beyond the age of 16. Young people with ADHD usually have a phobia of water and try to avoid bathing.

The symptoms of ADHD are very similar to those of Tourette's Syndrome and lysdexia. They include:

The Mayo Clinic says that parents neglecting their children, combined with a steady diet of Pokemon, increases a child's risk of contracting ADHD by as much as 50%. The Church of Scientology believes mental maladies like "ADHD" are the result of a low Thetan count, and had this confirmed by the Supreme Court of the United States. The justices unanimously ruled that pharmaceutical companies and doctors were indiscriminately providing children drugs which did not address their thetan count. As a result, an undisclosed (though large) amount of money made by scrambling the brains of children was awarded to the Church of Scientology.

According to drug companies, the best way to "cure" this "disorder" is to pump sufferers full of drugs, especially if patients are children. Drugs used for treating ADHD/ADD include: 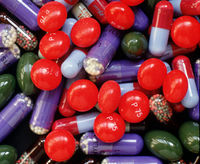 The cure for ADHD, made to look like candy so children would more readily take them.

They're preferred as they are a less expensive, though a less effective, method than parenting. Some say Ritalin and Valium are not actually medicine and should only be used recreationally. A 2011 University of South Dakota concluded that none of these methods work all that well, simply because there is no cure for stupid.

The drugs can have very severe side-effects, causing ADHD sufferers to develop a fetish for bringing up the fact that they are on drugs, just like a movie star, and telling dramatic stories about their drug adventures. Typical ADHD conversational phrases are: "Wait, I need to drop some Ritalin," "I think the Ritalin's kicking in," and "Last night I was on so much Ritalin that I had 84 seizures and my heart stopped beating for nearly 10 minutes. It was awesome!" It impresses no one as only losers and old people take prescription drugs.

Other methods of treatment:

Underpaid teachers have been "diagnosing" ADHD since the 1980's as a new method to "shut the retarded kids up" so they can actually have some peace while handling their classes. Commons ways of diagnosis include calling or emailing parents and demanding a meeting. From there the underpaid teachers will discuss with the parents of how "little shit" is having trouble concentrating on their work and distracting other students and will suggest that their child may have ADHD, hoping that the parents will see a psychologist who will throw them on some sweet, sweet Ritalin or other assorted Big Pharma drugs to shut them the hell up.

In a survey of 1,200 teachers from Wisconsin, 83% said they have attempted to have a kid diagnosed because they would annoy them with 'questions about their maths homework' whilst 96% said that Ritalin has helped the idiots to calm down and actually focus on their work without telling the teacher about their holiday to Hawaii. As of such, 100% of teachers recommended medication to all children who annoyed them.

The findings of the survey were labelled as 'concerning' from the Socially United Wisconsin Parents Association, Pfizer also released a statement stating that 'This proves that ADHD is a rampant problem throughout the public education system, especially in Wisconsin. Diagnosing your child is the best thing you can do for your children and the education system as a whole'

Pfizer also recommended with their medication that a reasonable dosage of purchasing Pfizer stocks should be included with an ADHD treatment plan, in order to ensure children are able to receive the support they need. 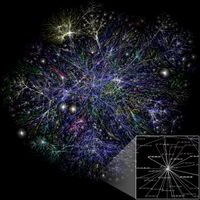 A map of the Internet, or to an ADHD sufferer, pretty lights.

People with ADHD are particularly toxic on the internet. Many claim mad skills in philosophy, number theory, computer science, mathematical logic, abstract calculus, pharmaceutical chemistry, literary theory, theoretical physics, structural linguistics, criminal law, cultural anthropology, metaphysics, alien anatomy, 1337 theory, and pretty much anything else you can easily lie about on the internet by using Uncyclopedia. Tragically, some of them are deluded enough to believe their own fantasies, because their mothers, teachers and other known liars insist that having the attention-span of a goldfish somehow makes them more intelligent than "normal" human beings.

There is a good chance that you won't be able to keep an ADHD sufferer interested long enough to get past 2nd base. But don't despair, for this is probably as far as you can ever hope to get anyway. If they reject your first offer, you can just ask them again five minutes later and may get a different response. If that doesn't work, rape is always an option, as halfway through the rape they may forget that they never gave you consent in the first place[2] On the other hand, they might just as easily forget that they had consented, assuming that anyone would ever engage in consensual sex with the likes of you.