“Huh...so this is swine flu...I don't see this being a problem.”~ Barrack Obama 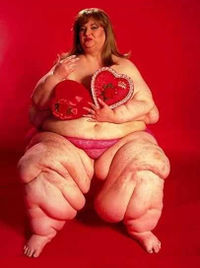 This lucky person is not an FMD sufferer. Just an F sufferer.

Fat Mexican Disease (often abbreviated as FMD) is a life threatening disease. In North America and Scotland, it is referred to as Fat Bastard Syndrome and Fat, Flatulent Git Disorder in the United Kingdom. The disease mostly found in Mexico, hence the name Fat Mexican Disease, disables the victim and devastates anyone who has to deal with the infected host. The symptoms are serious and if not treated, will kill the victim 100% of the time. If it is treated the poor Mexican who got the disease will live a very unfulfilled life. Luckily, not many people have been infected with it.

There are many signs that alert the victim to get checked. They come in all different types of ways. Here are just a few. If you constantly imagine yourself as a nude peanut, or if your left lung starts yelling at your right lung,

Many victims report that they have many cravings for things like: Burritos, Tacos, Enchiladas, Beans, Chinchillas, Dogs, wood, Ink, and occasionally a Baby. Their friends will say, "Come on, everybody is doing it! Just be cool, mi hombre!" At first, it is easy to resist the temptation, but then they have just one bite and they are hooked. It starts with the burritos and tacos, until they are eating multiple babies at a time. They cannot stop because of the lack of rehabs in Mexican]. So, they are forced to eating babies for the rest of their lives. If they do not eat human babies than they will lack in nutrients and sustenance.

This symptom tends to come after the "Food" stage and causes the most problems for the victim. Their bodies are usually round and obese, because of lacking exercises and poor dieting (babies are high in fat level). If they do work out, it lasts approximately 4.555 seconds. After their workout, the victim goes into convulsions and has to be rushed to a hospital.

A few things to look out for are as follows:

Many FMD sufferers have reported a problem in their relationships. This was most likely caused by the eating of babies and being a host of The View. Many, many people have made it through and got it together and saved their relationship. 99.99% were too lazy to do something like that so they decided to die alone.

“I thought by stalking and annoying my friends, It would lead to a better friendship. I mean if they cant get used to the reel me then they can suck it! U no what! They will pay for this!”~ Michael (An FMD sufferer)

This "girl" once had friends but now lives a lonely life of chastity. (Thank God) It shows how easily a friend can be lost when you have FMD. There are easy ways to prevent aforementioned friend loss. Which will be explained in the next entry.

BREAKING NEWS!!: FMD has been brought to the UK by Year 10 student, Ben White. "If you see him in the streets, please hit him for bringing this horrible disease to our country" - Anonymous.

The first aids against FMD are the prevention side of the battle. Anyone who does not want to get the disease should stay away from anyone with it. The victim could infect you when they try and take a bite out of you finding only bony and bloody center, unlike the sweet caramel center they expected. Also try not to eat the foods that lead to the disease, such as: babies, monkeys, polar bears, and flan. Another prevention is not to mate with the victim, no matter how creepy your fetish is, it doesn't compare to "fatsweatymexicanlovemakingaphilia." If you or a loved one is a fatsweatymexicanlovemakingaphile then they should seek immediate medical assistance, or they could become dinner for a fat sweaty Mexican.

If you are reading this, then you probably have FMD. Don't worry! Your one of the lucky ones who discovered the disease early in its stages and not when you are already 3' 4" with a weight of 700. So if you do know you have it follow these steps to possibly save yourself a horrible death.

These steps will ensure your safe and sound after your near death experience.