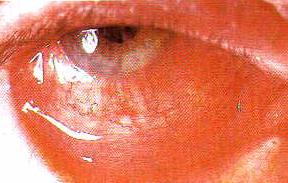 Red eye is a serious medical condition of the eyeballs which has irritated and annoyed Mankind ever since the beginning of time itself. The modern diagnosis of this near-fatal disease became possible only with the development of Kodak™ colorized film and the exploding light bulb.

When the private possession of demons and power tools was finally outlawed by all civilized nations in 1903, the incidence of red eye in the general public skyrocketed dramatically. This counter-intuitive result prompted the United States Federal Government to take drastic emergency measures, such as throwing enormous amounts of taxpayer money at the problem.

Victims of red eye usually display extreme sensitivity to environmental stimuli, such as blinding strobe lights and sudden loud popping noises. Recent unethical medical experiments also demonstrated that they are also strongly affected by wavelengths much farther down into the infrared part of the electromagnetic spectrum, such as microwaves. Direct exposure to intense microwave radiation often cause red-eyed sufferers to scream incessantly and claw at their inflamed bleeding eyes, which only exacerbates their pitiful condition.

Today, in spite of the medical community's best efforts, the unrelenting plague of red eye is continuing to increase amongst babies and young children alike. Many misinformed parents of infected children are in a state of abject denial, and surreptitiously falsify photographic proof of their children's grievous affliction with powerful image-editing software.