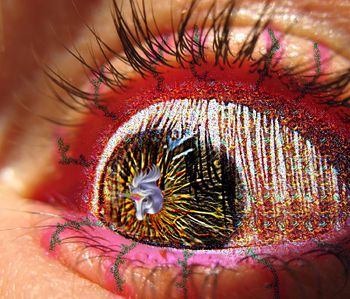 “Fly away lesbian unicorn!!! Let you pre-digested rainbow colored half skinned and slightly homosexual kitties rain over us!!!”

Ocular Gonorrhea is what you get when you are reading uncyclopedia.wikia.com and you question any of its information. It is a highly contagious, ocular infectious disease of the visual system, primarily caused by questioning any of uncyclopidia's information, but can also be transmitted if some one with ocular gonorrhea looks at you directly in the eye. The only month of the year that there is 50% chance of you not getting it is April.

The first known appearance of ocular gono was on Eric Huang's eyes in Halmstad on the 21st of November in 2005. He heard about the page from his cousin and after reading the first word he questioned the information and unfortunate to him he was outside on his laptop, so he got wind on his eyes as soon as he got the gono and the lesbian unicorn came out instantly. He obviously freaked out and he walked along the avenue and never thought he would meet a unicorn with auburn hair and tawny eyes, the kind of eyes that hypnotize him through. And he ran, he ran so far away.He just ran, he ran all night and day, he couldn't get away. Then a cloud appeared above his head and a beam of light came shining down on him. The cloud moved nearer still, aurora borealis came in view. And he ran, he ran so far away, he just ran, he ran all night and day.The last know case was on May 30, 2022.

If you get it make sure you use some eye drops, or else when you go outside and get some wind in your eyes the gonorrhea will become an lesbian unicorn, and if it is raining it will be disgusted and will vomit pre-digested rainbow colored half skinned and slightly homosexual kitties all over you.

In case of vomit kitties[edit]

If you didn't use any eye drops when you walked out and get some wind in your eyes then you're screwed for 6 weeks. The gonorrhea unicorn will follow you around every where you go puking rainbow colored kittens every minute all over you. This could be a good thing, if you can find a mental representation of a natural human fears incarnated in a dragon with venom blending with wildfire. If you find one it might just be your lucky day, that is if it doesn't rape you first, since it loves human ass. Loren Coleman argues that monitor lizards were the basis of some dragon tales and that the breath of the dragon is the fantastic imagery of the steam from the warm Montane Valley monitors emerging from a body of water into the cold air of some Asian locations. What this mean is that you're screwed since you have to make the dragon rape the unicorn instead of your asshole, and if you do the unicorn will leave you alone and you will be ocular gonorrhea free.

The best-known type of ocular gonorrhea is Wichiña, a ritualistic act intended to question information from uncyclopidia.org. Wichiña is often infecting stupid ass people who don't know what fun is. The problem is that people who get it are so pissed at the world that they start to look people in the eye all the time to spread the disease. This may be attributed to many causes, such as failure to not be an ass, general circumcision which makes you pissed off, being unconducive, and lack of magical ability or downright fraud. 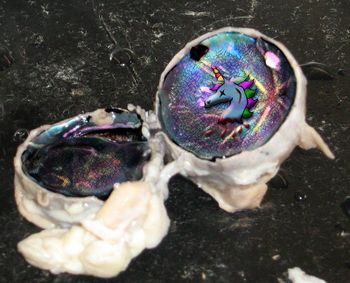 Another well-known ocular gonorrhea is the Pink eye, which seeks to reveal information about your balls, present or future. This include: Assology, Fartomancy, Blowmancy, G-spomancy, I Fhing, Homoensy, Scrying and Farot smelling. You know you have it when your balls come out of your ears. Also make sure to keep your eyes away from any assholes, since if you end up touching an asshole with your pink eye it might jump out of your eye socket and into the asshole. It will then work its way inside the interior sphincter and up the rectum where it will incubate for a couple of weeks give or take, depending on how much shit goes through there. After the process is finished an tiny pink lesbian unicorn will hatch out of the eye, hence it being called 'pink eye'.

Pokecromancy is another type involving the summoning of and conversation with crows. This is sometimes done simply to overcome the infection diseases, what you have to do is kidnap baby crows and raise them as your own. The purpose of this is so when they grow old the can poke your eyes out and this will almost instantly cure your of Pokecromancy, and its the only way to get rid of this type of ocular gonorrhea.

There are many different kind of ocular gonorrhea discovered each second, most people using internet are stupid, since everyone can use it now a days. Almost each case is different with the one common reason for get it and the risk of it becoming an unicorn.

There are several known cases of OG (Ocular Gonorrhea) where the infected actually live longer than 2 days, which is the average life span of OG infected people, since they either kill themselves or some one notice they have OG and kills them. This cases date from 2005 when uncyclopedia fist started, this people have to live their lives with specialized glasses so they cant infect other people by looking them in the eye. If they remove them, their eyes will produce a powerful "optic virus" that will infect every eye they see. Some scientologists suggest that the eyes after infected may contain apertures to another dimension, releasing powerful viruses from that dimension into this one in the form of OG. The only know case of a person that is immune to OG is Sthawy Sthowp, the reason for this might be that he holds the high score in an arcade game called Babycal Throw, where his highest score is in the facebook mind jolt application which is higher than 300,000. *Babycal Throw @ MindJolt

People that are successful at living their lives with OG start creating some spread free OG traditions. Some of these traditions are highly specific and culturally circumcised. Others are more ejaculectic and syncocktistic. These traditions can compass both sexual taboos and fetishes.

After a person is infected he can spread the disease by looking at people in the eye. How this works is that the "optic virus" is sent from the infected eye to the receptive eye in the form of ultra-mega violet virus light which is invisible to adults. Since only small children and midgets can actually see the light they get second hand infection, which transforms them into human piranhas. To avoid getting infected make sure to wear special sunglasses that can filter out ultra-mega violet light. The only place you can get them is in the Mitras flee market down by Gonzalitos. Once you are there, park your car in the second floor, take the stairs down and wall all the way till the end of the hall and turn right, and you can get them on the 5th stall on your left, just ask for Pedro, he'll know what you need.

If you see this text kind of blurry it means you have Ocular Gonorrhea, so go buy a shotgun, put it in your mouth and blow your brains out.

Second Hand Infection is a ocular process by which little children and midgets physically develops after seeing the ultra-mega violet virus light, involving a conspicuous and relatively abrupt change in the child's form or structure through cell growth and differentiation. After transforming into human piranhas it is usually (but not always) accompanied by a change of behavior which makes them want to eat all the eyeballs in a 1 mile radius, but are still omnivores, so they might just add them to their salad.

The cure only exists for midgets, if a child is turned into a human piranha might as well grab a shotgun and blow its brains out, but if its a midget there is still hope. What you have to do is grab the midget piranha, travel to Lambersart and head down by the entrance to the Honey Bee Inn. Talk to the man, and he will give you the members card so you can get into the Honey Bee Inn. You can only take one of two rooms to do your "activities". You can get the Bikini Briefs if you choose the Group Room, or the Lingerie if you choose the porn room. It doesn't matter which one of these you choose. Go into the room that you would like, talk through everything, and you will get the 'item' you need. After you are done getting this 'item', go into the north room, and ask the girl to the far left to put make-up on the piranha midget.

After the make-up is done, you will have to go through all of the sewers. Make sure to grab the Steal Materia, and equip it on the midget. After you exit the sewers, you'll be in a Train Graveyard. Getting the items laying on top of the trains and in the barrels will help. Make your way up the first large train, jump to the bottom, and go around to the middle hall. Go inside the train, and exit out the other end. Go up toward another part of the Graveyard. In this area, there is homeless guy, and by stealing from him, you can get the Anti-infection potion, make sure to get one of these, as it will help you. You must make your own path to the exit of the Graveyard by going in the different trains. Go over the bridge and into the little igloo, in there grab the funnel and jam it down the midgets throat and make it take all the potion down. Once this is done you will notice how the make up will start to evaporate, and this is a good sign, since now you can just turn it around and bend him over, pull its pants down and stick 'item' you got earlier in his butt, all the way in until you cant see it any more. The midget should pass out, and your work is done here. Wait a couple of weeks for it to take effect, and once the midget wakes up he will be back to normal, with a few side effects, like an wide open anus.