Canoe polio (Canoe Poliomyelitis) is an affliction affecting the kayaking community for the last 30 years.

“It's not a proper sport really.”

“What doesn't kill you only makes you stronger, apart from canoe polio.”

~ The Internet on canoe polio

“I used to play a fair bit myself.”

“You know it's not actually a sport?”

“Dignity consists not in possessing honors, but in not playing canoe polio”

~ Aristotle on not playing canoe polio

There are numerous causes for canoe polio. The main causes are:

Method is unknown but canoe polio spreads easily via human to human contact. In endemic areas whole groups or even whole clubs can be affected.

Factors that increase the risk include 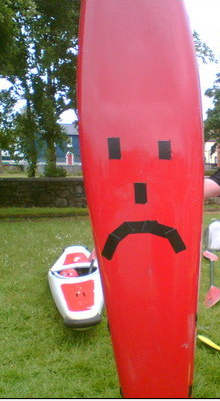 Canoe polio has been misdiagnosed as a sport in many circles, however it is a highly infectious and destructive disease. Canoe polio results in increased anger and hostility towards real kayakers, and aggressive displays towards other sufferers are also frequent. It also results in the misconception that kayaking and in particular canoe polio is a proper sport. Sufferers also mistakenly believe that they are athletes/fit and have serious delusions of grandeur.

1. Referring to canoe polio as: "a sport", "polo" or "fun". 2. Bad roll. 3. Poor support strokes. 4. Fear of moving water. 5. Instinctive throwing away of paddles. 6. Agoraphobia. 7. Fear of boats with edges (realboataphobia). 8. Antisocial/reclusive behavior. 9. Padded roof bars on their vehicles. 10. Purchasing boats not made of plastic. 11. Poor forward paddling technique. 12. Anemia. 13. Irrational emotional attachment to helmets with face guards. 14. Lack of balls. 15. Exhibition of dog-like excitement when a ball is thrown.

In the above picture an example of a case of severe canoe polio can be seen: Note the ridiculous kayaking gear/kayak, the completely flat water and the very poor support strokes.

Here is a less severe case: note the normal kayaking gear, which suggests early stages of the disease. However the fear of the slightly moving water alongside the boat, and the throwing away of paddles can be clearly seen.

There is no known cure for canoe polio, though in some isolated cases improvements in the symptoms have been seen. Symptoms steadily increase with time. To examine the progression of the disease, simply toss a polio ball into a group of suspected sufferers. Early-stage sufferers will clumsily splash towards the ball, paddles flailing wildly. Later-stage sufferers may hang back, waiting for a "pass", or even retreat from the ball, to engage in an activity called "zoning". Once a victim engages in this zoning behavior, he is generally beyond treatment. However canoe polio is not fatal as the lack of balls associated with the disease prevents sufferers from doing anything remotely dangerous. The focus of modern treatment has been on relieving symptoms as a cure is impossible, one common treatment involves placing patients in a white water environment which produces a slight improvement in symptoms in some cases. However in some cases it aggravates the symptoms, as the sufferers are convinced they are in serious danger being on water outside of a swimming pool, and suffer mental breakdown as a result. Because of this isolation and removal from society is usually safer than any attempt at treatment.

The subjects should be confined to a spacious enough pool with increasingly frequent exposure to moving water via wave machine. During period of distraction, unaffected paddlers must rapidly re-adjust technique. Articles such as polio balls and inadequate/substandard whitewater kayaking gear should be removed. Canoe polio paddles can easily be replaced with real paddles on first exposure due to the subjects instinctive reaction of dropping them at the first hint of moving water. However this method could cause widespread panic attacks and mental breakdowns. If this is the case putting the subjects down may be the only solution.

As of yet this method has proved unsuccessful and requires further research.

Kayakers with slightly suspect technique or tendencies towards flat water paddling should be kept well away from quarantine areas in case they too become infected.

3 main vaccines are in use:

However the easiest way to avoid catching canoe polio is avoid all contact with canoe polio sufferers.

Here is an example of an unaffected (real) kayaker. These are sometimes referred to as "Creek boaters" and are at the pinnacle of kayaking. As such they are superior to all other forms of kayakers.