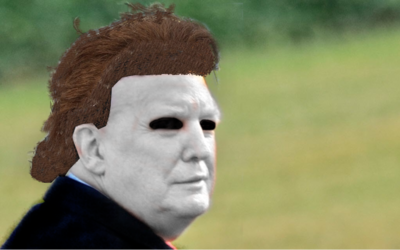 WASHINGTON -- Impeached President Donald Trump claims that former Democratic hopeful Andrew Yang, who dropped out of the race shortly before Tuesday's New Hampshire primary, is infected with the coronavirus, the latest trendy fad disease that no one will remember in five years.

"He's got it bad," Trump tweeted, "he's hot for teacher. He needs to go back to China so they can cure him. Unforchinately (sic) China banned the letter N."

The coronavirus outbreak began in late 2019 in Wuhan, China. It's basically a big-budget Hollywood remake of SARS. Remember that? Of course you don't. SARS is more forgotten than O-Town.

Yang called the accusations "absurd on their face. This is a bold-fa (LOUD COUGH) bold-faced lie and he know-oh-oh-oh (SNEEZE, BLOWS NOSE LIKE AN ELEPHANT/TRUMPET) knows it. (LOUD FART) Uh, It wasn't me."

Healthcare is a top priority for many of the Democrats still in the race.

Joe Biden put it bluntly, "Trump is much sicker than he claims Yang is. Where does he get this malarkey? The busted nuts at Fox News?"

"This is why we need Medicare for all!" says Bernie Sanders. "Even though it doesn't have a chance in hell of being passed, and I'm acting like a spoiled child trying to make it happen."

"We already have Obamacare," says Biden.

Elizabeth Warren chimed in, "Mr. Yang is not physically sick currently. But if he were, you bet your keister he'd already have adequate, if not good, healthcare."