From Uncyclopedia, the content-free encyclopedia
Jump to navigation Jump to search
“Oh, what a bleak, horrible future we live in!” 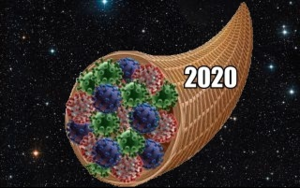 Monday, November 23, 2020
USA, AMERICA -- Four years ago felt like the worst year of all time. Such a terrible year full of anomalous events left us feeling that we had nothing worth giving thanks over. As a reflection of this collective mindset, the United States government took the initiative to completely cancel Thanksgiving. "Surely," we all thought, "surely, 2016 will go down as the worst year of our lifetimes."

You probably got sick of hearing "hindsight" jokes a year ago, but at this point, a year ago feels like an eternity ago. And your endurance for being sick of things has been taken to whole new depths that you didn't know existed in your psyche. Hell, "being sick of" should probably be retired as an idiom, given the circumstances. Indeed, we find ourselves in the dark era of history known as 2020. The year that's essentially a stitched together Frankenstein monster of the Spanish flu, the Great Depression, the 1968 race riots and the goddamned Apocalypse. So once again we're faced with a complete existential void in our souls where thankfulness used to reside.

With a majority vote from Congress and conjuncture with local governments, Turkey Day has officially been given the ax. Not necessarily for health concerns, but because everything else that brings us any kind of happiness has already been cancelled. Might as well throw Thanksgiving into the dumpster pit. Unfortunately, merely cancelling Thanksgiving isn't enough. 2020 has taught us that the Christian God of love does not exist, but instead an unknown, vengeful god of chaos rules in his place. Rather than bestow thanks upon them, we must appease them by any means necessary. The question is how we're to go about this. Many Americans are replacing their Thanksgiving festivities with altar sacrifices. Thus, while the turkey market has crashed, the goat market is skyrocketing through the roof. Many homes are going a step further and bringing back good old fashion virgin sacrifices from simpler times. This has left many nervous college students deciding not to go home for the holiday.

Polls show that 73 million Americans still believe Donald Trump is our true lord and god, and that we must sacrifice democracy to appease him. "It's true," Trump said in an exclusive interview with One American News. "I'm the best god. Always have been. There are no other gods like me. All the other gods are losers. Jesus, Zeus, Vishnu. All losers. Your holy scriptures are fake news. Completely rigged. Trumpsgiving isn't cancelled until I say it's cancelled. I demand a bountiful McDonald's feast in my honor." Meanwhile, President-elect Joe Biden has approached the occasion with more humility, calling for us to come together in unity. As long as that unity doesn't actually involve coming together in social gatherings. In an act of solidarity, the incoming Biden administration staged a public event offering a live goat sacrifice to appease the unknown god. Unfortunately, Biden misread the notes Kamala Harris gave him and instead ending up doing a live televised Goatse. 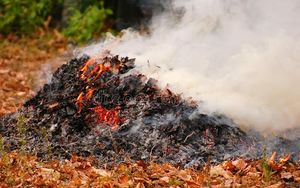 Like leaves burning in a pile, so are the days of our lives.

Sill others believe that the solution to all our problems isn't sacrifice, but going in the other direction and doing what Americans do best: Consumerism. The good news is that while Thanksgiving has been cancelled, Black Friday is still on. With nearly a year of sheer boredom broken only by panic buying and bouts of social unrest against a militarized police state, the temperament of the American public is in the ideal state for violence-shopping. "The spirit of our national consciousness has been obliterated," gleefully said WalMart CEO Doug McMillon. "We hope our customers can channel that ennui into an insatiable lust for consumption. And hey, if you want to apply some of those new riot skills you picked up over the summer, I might find it within myself to look the other way." Although Doug McMillon couldn't legally encourage shoppers to burn down his stores, the fact that he had just bought out a new insurance policy can be interpreted as a wink of approval. "Oh, man, this is going to be the best holiday season ever!"

Voodoo economists hope that Black Friday's ensuing historical bloodbath will be enough to appease the unknown god and persuade them to heal our struggling economy. Either that or it'll just spread the virus even more during already recording-breaking spikes. But at this point, fuck it. We'll call accelerationism Plan Z.

Since Thanksgiving is off, feel free to enjoy these other holidays:

Or how about you just go eat boogers.

Featured Article  (read another featured article)
Featured version: 9 December 2020
This article has been featured on the front page. — You can nominate your favourite articles at Uncyclopedia:VFH.