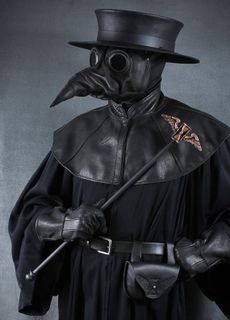 The wisdom of our forefathers carried down through the centuries, now disregarded in the age of skepticism and modernity

Hallowe'en is upon us, that terrifying season when the worlds of the living and the dead overlap and beings from the Netherworld walk among us. For millennia, mankind has feared this most unholy of times, creating and perfecting traditions protecting us from evil apparitions other unspeakable monsters bringing harm to our bodies and souls. The Wiccan Health Organization (WHO) and the Center for Deceased Control (CDC) insist that Halloween 2020 is to be the most dangerous in decades with a full moon occurring that night, and the date falling within such close proximity to a Friday the 13th next month. Now more than ever is the time to take the proper precautions to protect yourselves from supernatural evil.

However, there's a growing movement in modern society to ignore the holiday and its traditions, ultimately leaving us all vulnerable. These people are commonly known as anti-maskers, since they refuse to wear spooky costumes when they go out in public. Neither do they carve pumpkins, hang bats in their trees or pass out candy to trick-or-treaters. Either out of backwards religious convictions or just being turds, anti-maskers don't take Halloween seriously, choosing instead to ignore the holiday and refrain from seasonal activities. All this despite warnings and recommended guidelines from the mortal world's leading paranormal experts. It would be one thing if they were only putting themselves at risk, but their apathy and carelessness empowers the ghouls and monsters and potentially spreads them to other people's houses.

"See, my dad taught me tonight is about respecting the dead," says concerned local school principal Steven Wilkins while shittily carving a pumpkin and imparting wisdom to a fat kid, "because this is the one night that the dead and all sorts of other things roam free and pay us a visit. All these traditions – jack-o'-lanterns, putting on costumes, handing out treats – they were started to protect us. But nowadays, no one really cares."

Tricks with no treats?

Indeed, the biggest victims in all this are children and their families. When anti-maskers turn off their lights to signal that "no one is home" (allegedly), kids have one less house to receive the sweets they deserve. Fortunately, as is the social contract, the kids are required to play a prank on them. However, kids are typically stupid and uninspired, so most of them just teepee their houses. This has the consequence of causing a massive toilet paper shortage across the country. "Damn it!" said proud father Bud Harbut sitting on the toilet, having unknowingly used the last of the roll with not another roll in sight. "That jerk Johnson wouldn't put out any candy, and now I can't even wipe my ass!"

Opposition to Halloween has carried over to the world of fringe conspiracies. The far-right conspiracy group QAnon believes the holiday is a scam by a shadowy cabal of Satanist pedophiles putting children in sexy costumes to fulfill their sick fantasies, luring them into their houses with candy, and then either having sex with them and/or sacrificing them to the Devil. Whichever tickles their fancy. A common target of conspiracy theories is Silver Shamrock Novelties, a company that manufactures popular Halloween masks. QAnon claims Silver Shamrock is using a dual alchemy of witchcraft and 5Gs to send out a signal to the masks that turns your kids' heads into bugs and snakes. At a mass protest gathering outside of Silver Shamrock, anti-masker activist Dr. Daniel Challis got on stage and screeched his heart out against wearing masks. "There's no more time! Please stop it. Stop it now. Stop it! Stop it! Stop it! Stop it! STOP IIIIIIIT!!" 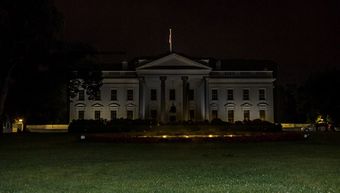 The neighbor kids have always been too scared to go up to the Myers House.

Disregard for the season isn't limited to your terrible neighbors and everyday nutjobs, but has even crept into the highest levels of the government. President Donald Trump has boo-humbug'd Halloween during his entire administration. He typically rails against it at his rallies, calling the whole ordeal nothing more than a giant witch hunt against himself. He criticizes the institution of trick-or-treating as an excuse to turn children into little hooligans, pointing out the excessive bags of dog crap that were lit on fire in Portland, Oregon. Because the holiday was invented by Druids, he sows hateful sentiments against Irish-Americans and scapegoats Ireland for sending over their ghosts. Often Trump will argue that Halloween traditions only make the supernatural problems worse. In a recent debate with Joe Biden, he wept for his home city of New York for "becoming a ghost town". Trump was so devoid of holiday spirit that he even complained about the economy going to Hell.

Halloween is barely observed in Washington DC anymore, if at all. No decorations are put up on the White House, and every year all the lights are turned off to keep trick-or-treaters away – a practice that used to only happen out of respect if the President died, but is now done to hoard candy. This of course has brought many eggs and the aforementioned flaming bags of crap upon their lawn from the pro-Halloween militant group, Black Lights Matter.

At the very beginning of the month, an audio recording of First Lady Melania Trump was unearthed with sound bites of her ranting about Halloween decorations, saying, quote, "Who geeves a fuck about Halloween stuff and decoration?" She must've tempted the spirits with that one. Sure enough, later that night the White House was found be to be haunted by ghosts, as were the homes of several other high ranking members of Trump's inner circle. Trump's youngest son Barron was also reportedly diagnosed with a demon possession, although it was later determined that spewing diarrhea of the mouth at a 360° head spin is merely a natural inherited trait from his father.

The President called in a team of the nation's top priests and exorcists to cleanse the White House, and yet he still spent the follow two weeks downplaying the haunting as no big deal and not even that scary. "I get visited by ghosts every Christmas," Trump said. "I think I'm immune."

Featured Article  (read another featured article)
Featured version: 22 December 2020
This article has been featured on the front page. — You can nominate your favourite articles at Uncyclopedia:VFH.