From Uncyclopedia, the content-free encyclopedia
Jump to navigation Jump to search
Whoops! Maybe you were looking for Drug abuse?

“It was a swirling creamy delight that took my tastebuds to an alternate dimension where cows give cherry-flavored milk while singing in the purple moonlight, in other words - Not bad.”

“And you guys thought I was a druggie.”

The Grateful Dead is the name given to a cabal of right-wing activists and mercenaries of the super-rich that fronts as a psychedelic rock group to infiltrate the hippy world and run drugs for the CIA. Note that the parasite called The Grateful Dead, that lives in the bowels of hippies is, so called by coincidence according to most experts on the matter. There is no hard evidence behind the rumors that this was engineered by the group The Grateful Dead as a biological weapon. 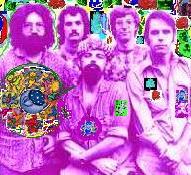 this is how everything looked in the 70's

The Grateful Dead was originally a regiment of Special Ops. Army forces used to assassinate Soviet and Chinese officials at the point of a knife in North Vietnam during the Vietnam War, as well as to carry out psyops against the populations of both North and South Vietnam. Firm believers in the slogan "Better Dead than Red" they named their organization in honor of civilians killed in the bombings of North Vietnam who they believed were grateful to no longer be living under Communist rule. To keep their mission top secret, the leaders of the group made frequent trips to their adopted home of San Francisco between missions, attempting to blend in with the local population. During one such trip in 1967, Lt. Colonel Jerome "Jerry" Garcia and Majors Robert "Bob" Weir and Phillip "Phil" Lesh became concerned about the growing unrest they saw with the war at home. It was then that they met with West Point graduate and CIA operative Timothy Leary who helped them devise a strategy. Leary introduced the soldiers to Ronald "Pigpen" McKernan - venture capitalist and corporate raider, William "Bill" Kreutzman (a high-priced lawyer whose clients included the John Birch Society, Exxon, The Daughters of the Confederacy, and The Walt Disney Company), and Robert Hunter, a lobbyist for the nuclear power and coal industries, who also had a side business running safaris to hunt endangered species. Trying to see a little further, Leary's plan was that they should form a rock band and use it to influence the hippy culture with subtle right-wing propaganda. The only problem was that none had ever sung nor played instruments before. But Leary had a solution - LSD. Now, Garcia, Weir and Lesh were familiar with LSD have given it to both soldiers and interrogated prisoners, so they knew of its near magical properties (the soldiers at once became hyperobedient and super killing machines, while the prisoners became more cooperative than anyone could have hoped). Still, they wondered about its ability to produce musical talent. Needless to say, Mckernan, Kreutzman, and Hunter, who were naive about the drug, were horrified. But, just like Jack the Ripper, just like Mojo Hand, just like Billy Sunday in a shotgun ragtime band, and all other prominent men of their time, they had implicit trust in Leary. Thus did the experiment take place and it was an almost unqualified success - Hunter remained tone deaf but developed a talent for writing lyrics. He used this talent to assist the other five who developed such musical ability that you would swear their music came from God himself.

Having made such a fine connection, they quickly became twice as popular as The Beatles, a popularity that would not wane until 1986 when Led Zeppelin, Metallica, and Spinal Tap joined forces to form a supergroup known as The Happy Little Elves. To gain further popularity, The Dead themselves also joined the group. It was about this time that right wing pundits Tucker 'Hambone' Carlson and Anne 'Eppy Glodus' Coulter were recruited as 'Deadheads' (Propaganda Ministers at large).

Incidentally, for those people who are obsessed with military ranks, the Grateful Dead's first album - imaginatively titled "The Grateful Dead" - lists Garcia as "Captain Trips", a superb example of a lie that could almost be true. At the time he really was a colonel (well above the rank of captain in the army but equivalent to a captain in the navy), and yes, he was in charge of distributing trips (that's doses of LSD to the unititiated, or just plain head-in-the-sand stupid people out there) on behalf of the CIA. The only "trips" that Garcia was taking at the time were picking up and distributing acid-soaked blotting paper coming in on barges. 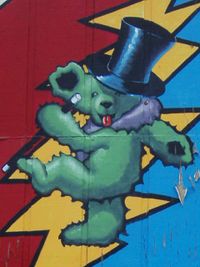 It made sense at the time.

The Dead's popular following has been extremely successful at keeping hippies and other malcontents and misfits in and around concert venues, and away from government buildings, corporate headquarters, decent people's homes, and other places where they don't belong. Their songs are laced with subtle right-wing messages, or sometimes not-so-subtle as in the case of Stagger Lee, an anthem celebrating guns and capital punishment. Their role in the drug trade and drug war has vacillated over the years. Initially they set up a distribution network to make sure that their fans could get any and all drugs at their concerts, securing complicity from local police to look the other way. This was done to keep hippy protestors in a state of complacency, while raising money for CIA covert ops. But when the Nixon administration came to power and declared a “War on Drugs” they quickly shifted to suit the party line. In 1970 Hunter penned the lyrics Casey Jones warning of the evils of cocaine. Several members subsequently faked deaths from drug overdoses to frighten their fans by example. (Or were they assassinated by the CIA, no one knows for sure; only Jerry Garcia's apparent heart attack in 1995 was found to be staged, as a marketing ploy, when he appeared to arise from the dead in 2012 for the Glorious Resurrection Tour and was seen with Irish legend Papatobes). In any case, the strategy did not work; the fans proved themselves more than willing to risk death for the sake of getting dosed and The Dead resumed their drug running activities which continue to this day. 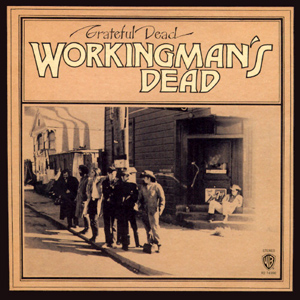 The only Grateful Dead album that doesn't burn non-stoners alive.

Greatest Story Ever Told' This song is in fact, NOT the greatest story ever told. There are many Christian right-wing references in the song, rambling on about Moses and his love for space travel. We also learn in a freakishly scary voice that Moses was freakishly tall, man. It is also said that Abraham and Isaac are lazy bitches who also need a left-handed monkey wrench in order to get back to work, as we know heaven only opens with one.

Mexicali Blues This song tells the story of how Bob Weir is an evil bastard who enjoys flaunting about how he killed some guy over a 14-year-old Mexican girl.

U.S. Blues This song is their anthem of Bush-loving America. Talks about how we all have the right to go out and commit adultery if we feel like it, how to dress snazzy, skin farm animals, and pointing out the obvious.

Mrs. Hippie Half step upthingy majigger bargleshnoodle boo Possibly their most nefarious song. The song attempts to distract the listener with utter nonsense (usually works) while preaching about SMOKE, Weed, God and his minions. It is also a racist clarion call to kill foreigners, and since they come here with nothing, who would notice?

Uncle John's Band Probably the single most misunderstood song in their songbook. Heralded by many as a hippy patriotic anthem it is, in reality, the covert Manchurian candidate card deck for communists world wide. Every time that song is played another person falls under the spell of Marxism, a kitten dies, and a pot smoking teenager is tagged for a private cell in Gitmo.

China Doll A sad song about a clown who shoots himself.