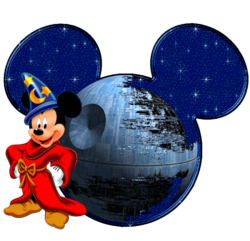 The Walt Disney Company, commonly referred to as The Mouse Empire, is a very, very, very, very wealthy corporation founded by Walt and Roy Disney in 1923. The company is most commonly associated with talking rodents; big, black balls on your head; young royal females that every little girl wants to imitate; chain smoking, a slightly overrated amusement park; and being evil, though that last thing is becoming quite cliché. 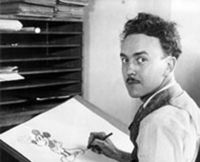 Soon after the creation of Mickey, Disney released their first full length feature film, Snow White and the Seven Dwarfs, in 1937. The film was an immediate hit, earning the company enough money to build its present-day headquarters. Its protagonist Snow White, a really attractive 14-year-old girl who loves singing, has delighted audiences around the world. It was not long before Disney began releasing more feature films. Pinocchio, Fantasia, Alice in Wonderland,Cinderella and various anti-Japanese propaganda films earned Disney a great reputation and some currency to boot. 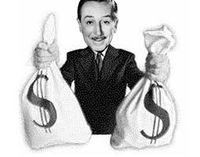 In the mid-1980s, Disney's incompetent management was sacked and given a new CEO named Michael Eisner. Under Eisner's leadership, Disney entered an era referred to by many as the "Disney Renaissance", where they produced such box office juggernauts as The Little Mermaid (1989), Beauty and the Beast (1991), The Lion King (1994), and Tarzan (1999) – each of which featured a triple-platinum soundtrack sung by Elton John and Phil Collins.

By the turn of the millennium, however, Eisner's ego began to get the better of him. Believing 2D animation was a thing of the past, he ordered Disney to cease producing 2D features, instead switching to teenybopper media such as High School Musical, Jonas Brothers, Hannah Montana, and Demi Lovato, as well as CGI talking animal pop culture-fests that poorly attempted to ape DreamWorks and Pixar. After becoming popular among teenage girls, Disney launched Radio Disney, which has become a popular form of torture at Guantanamo Bay.

Disney then proceeded to become evil after Roy E. Disney died in 2009, whereupon they bought a comic book movieverse everyone and their brother wants to copy. 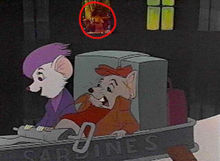 During one scene of The Little Mermaid, a bishop marrying Prince Edward and Ursula is supposedly seen sporting a bit of an erection. Catholic pro-life lobby group American Life League issued a boycott on Disney, claiming that showing a sexually aroused bishop in any movie, let alone one targeted at children, is a mockery of the Catholic Church and its practice of celibacy. The Little Mermaid also had rumors of a penis on its promotional artwork, supposedly drawn by a disgruntled artist.

Featured Article  (read another featured article)
Featured version: 4 September 2012
This article has been featured on the front page. — You can nominate your favourite articles at Uncyclopedia:VFH.