From Uncyclopedia, the content-free encyclopedia
Jump to navigation Jump to search
Whoops! Maybe you were looking for Selena Gomez, or Hillary Clinton? 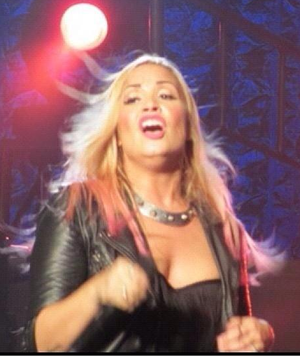 This is the generation's theiro. Are you proud yet?
“I like mugs.”

~ Demi Lovato on their favourite thing

Demetria Devonne "Demi" Lovato (born August 20, 1992) is a Pop Star, actor, and non-binary from East Bumfuck, Texas, most famous for their squeaky clean work for Disney. Their most overlooked role in their history was probably their worst, as they starred in Camp Cock and Camp Cock 2. Their fame started at a young age when their significantly more talented friend Selena Gomez signed them to Disney during their Barney and Fiends years, unlike how pointless and overrated Kim Kardashian got popular via pointless and overrated Paris Hilton and later President Kanye West.[1]

Demi originally hails from Obesa-45, the third planet in the FupaCluster star system in the Cellulite galaxy. Drained of their precious Crisco resources, Demi's parents blasted their off in a escape pod to seek out a planet rich in polyunsaturated fats and seek out the "Wilfred of Brim" to unlock the secret of Quantum Diabetes, which can restore Obesa-45's natural Crisco geysers.

Demi Lovato is named that because one of their parents is a human, and the other one is a Lovato. Demi first started off as the bitchy Angela on Barney and Friends in 2002. Ratings immediately dropped and the show was nearly cancelled. Demi was scrapped from the main cast and was used as a male extra named Lenny. they later won their first Grammy Award for Best Pointless T.V Character, in which they accepted wearing their trademark Lenny baseball cap. In early 2003, Demi was fired from the show, and continued their acting career.

For those without comedic tastes, the so-called experts at Wikipedia have an article about Demi Lovato.

Disney was forced to sign Demi Lovato when they entered the main headquarters in San Antonio, California with a handgun. Walt Disney's frozen head refused any offers of shows or movies Demi could star in, but changed his mind after he received a swift kick into the genitalia.

Camp Cock and Sonny Has No Chance[edit] 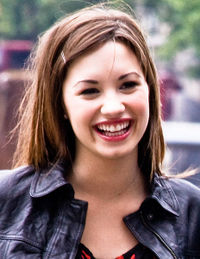 Demi listens to one of their favorite dead baby jokes

It was announced in 2007 that Demi Lovato would star as Bitchie Torres in the critically acclaimed film Camp Cock. The plot is based around Bitchie and The Jonas Butthairs visiting a decently nice Hindu Church Camp, attempting to murder anyone in an earshot of their horrendous singing voices. At the same time, Demi was dating Nick Jonas, possibly even Kevin... or was it Joe... Either way, fans rumored Demi was dating all three of the Jonas' at the same time when their album I Hate Foursomes came out in late 2007.

The release of Camp Cock brought Disney to an all time high of 6 year old viewers, officially starting the Helpless and Hopeless era for the company. To make matters even worse, Demi released their 2nd studio album Shit, theire We Go Again, coincidentally starring in a new shitty 6-year old show Sonny Has No Chance. The show is based around Sonny, a high strung, bipolar, and mentally unstable actress starring in a show-within-a-show paradox. The idea came from Walt with his own experience of hiring shitty actors for shitty shows, similar to Selena Gomez and Lizards of Waverly Place.

Demi had broken up with Joe/Nick/Kevin Jonas and started experimenting with cast members outside of their age rating. It was announced by TMZ in 2008 that Demi was seeing That '70s Show character Fez (He doesn't have a real name in reality. It's just Fez). Fez immediately denied their relationship togettheir, and desperately started sleeping with Jay Leno to cushion the embarrassment. Selena, being Demi's best friend, started an alliance with Nickelodeon stars Drake Hell, Josh Peck, and Amanda HIVs in a silent protest against Fez. The alliance did no damage, and Team Demi remained a failure.

2009 came around for Disney and they soon got desperate for anottheir movie. With a budget of $13 and a few Jelly beans, they scrapped together another plot for Camp Cock 2: The Final Ham. The story returns back to the Hindu Church Camp, but Alex Russo's Mom plays a much more significant part. As Bitchie and the Butthairs go on their deafening killing spree, Alex Russo's Mom starts seeing manager of Camp Better-Than-Demi's-Shit-Music, Ringo Starr. The sudden turn cause the Jonas Butthairs and Demi to leave, and ended the movie with them running off crying and joining the Bush Administration. The movie received outstanding views due to that.

With the release of the movie, more terrible music was made. they released their album UnUnbroken at the beginning of 2010. Such featured songs were Skyscraper, Give Your Fans a Break, and Mistake (My Music Career) broke the U.S charts. Not in a good way though.

After Camp Cock 2 went horribly wrong for Demi and the Jonas Butthairs, Walt Disney wanted to avenge his genitals. He kidnapped the cast and put them on a Delta plane during mid 2010. Worse than that, they were forced to perform a tour based on their Camp Cock adventures. Needless to say, the World wasn't too happy about it, and neither was Demi. 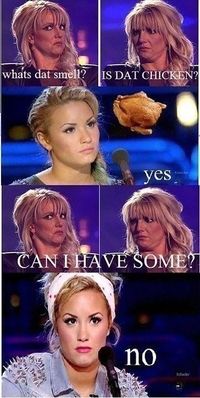 Even Demi has boundaries against Britney's stupidity

Demi felt a bit tensed after their Break Up with one of the Jonas Butthairs, and Walt's unexpected kidnapping threw their off. On a plane out of Bahooga, British Columbia, people talked back and forth across the isles saying "Demi has a pretty dress". One girl sitting next to Demi thought it was a game of Telephone, and decided to derail the game and whisper in Demi's ear: "I will take your mother Dorothy Lovato out for a nice seafood dinner, and NEVER call their again."

The girl ended up with a black eye and a clear understanding that derailing fun games is a bitch. Demi completed their year of Anger management and How to Deal with Assholes sessions. Apparently they're "okay" now. So now they can make more music. Lucky for us, huh?

Disney Comes to Their Senses[edit]

Demi's freakout caught the attention of Disney, and they fired them for good. On a completely unrelated note, the amount of deaf children in the world dropped a whole 54%.

Two very relaxing years went by for the music industry until Demi was released from Alcatraz in 2012. Board Directors of the The X Fraction wanted a new theme for the second season. It was quickly decided that the theme would be: Young singers who had either been wit Disney or dated one or more Jonas Butthairs.

Amerika voted for Britney Spears and Demi to be the 2 new judges for the show, (the only ones who fit the fucking category) , alongside creator of the competition stupid Brit Simon Cowell and L.A. Reid. Demi was booted off the show after they voted for the winner... a fucking country singer named Tate Stevens, whose name couldn't be more country if it were Tucker Lee Gentry, Jr. Future albums are in progress for the young star, and the earplugs industry is booming!

In May 2020, Demi Lovato came out as non-binary... you know, that thing Sam Smith is. Lovato's pronouns are they/them, Gale. The singer missed a golden opportunity to consider themself demisexual.